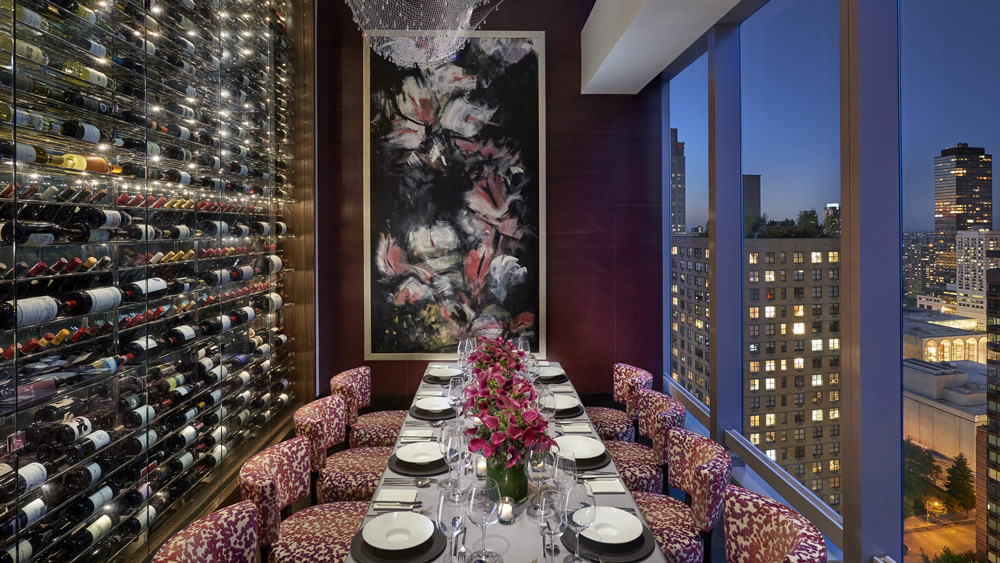 New Yorkers are known to go to absurd lengths to celebrate New Year’s Eve—whether it’s standing for hours in Times Square just to watch the ball drop at midnight or paying hundreds of dollars to dine at chain restaurants because they offer a view of said ball. Less absurd and much more extravagant is the Big Apple’s most spectacular way to welcome 2018—and while it doesn’t involve an up-close view of the famous ball, it features enough hoopla that the ball won’t even be missed.

Among the featured dishes are Maine lobster accompanied by a 2013 Château Margaux; foie gras with Asian pear and sake créme paired with a Domaine de la Romanée-Conti Burgundy from 2014; and Wagyu beef with black truffle, served with a 1970 Château Mouton Rothschild Bordeaux. Dessert and petit fours are paired with a 1997 Château d’Yquem Sauternes. It wouldn’t be New Year’s Eve without bubbles, so in addition to the wine pairings, Louis Roederer Champagne will flow throughout the evening, both at the private dinner and, starting at midnight, at the Roederer Champagne Reception, which will feature an open bar, a deejay, and more entertainment.

Of course, it’s called the Louis XIII Exclusive Experience for a reason. In addition to pours of the Cognac throughout the evening, each guest will take home a personally engraved bottle of Louis XIII, along with an engraved Louis XIII Pillet crystal glass. The eau de vie contained within each bottle takes up to a century to mature, which means that guests will ring in 2018 with a Cognac that’s been in the works since roughly the Woodrow Wilson administration.

For other revelers who desire an unforgettable New Year’s Eve experience sans the Cognac event, Asiate’s main dining room will also be serving the same prix fixe dinner for $918 per guest, with several cognac pours, Champagne, and slightly less premium wine pairings for an additional $398. Admission to the Champagne reception after 10 pm is $200 per celebrant. Either way, the last meal of 2017 is guaranteed to be one of the most memorable. (212.805.8900; RestaurantHolidays@mohg.com)