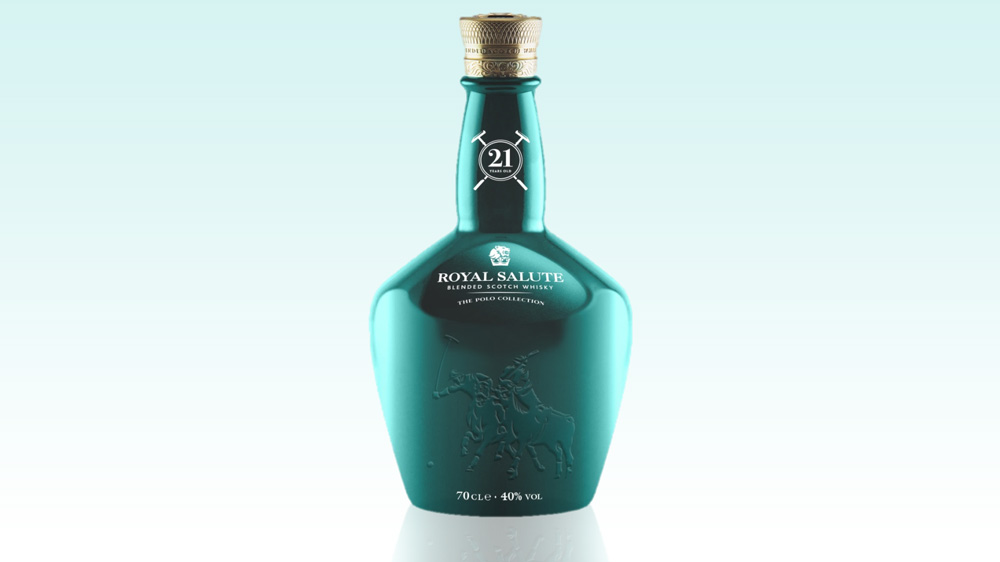 Although Royal Salute has been called the “King of Whisky,” it was originally created for a queen. In fact, on June 2, 1953 Royal Salute 21 Year Old was introduced to honor the coronation of Queen Elizabeth II.

In subsequent years, Royal Salute 21 went on to inspire other ultra-premium limited editions, all connected with the British monarchy. Each is presented in handcrafted porcelain flagons that require up to six days to create, sculpted from Cornish clay and then fired with a double layer of glazing.

It is a memorable occasion to sip any Royal Salute whisky, but certain occasions are more memorable than others. Recently we had the privilege of attending a private tasting conducted by Peter Prentice, Global VIP Relationships Director for Chivas Bros. It was held in the Polo Bar of the St. Regis Al Habtoor Resort & Polo Club in Dubai, as part of the tenth anniversary of British Polo Day and the Royal Salute Cup. There, we had the opportunity to taste an unprecedented flight of five of the rarest Royal Salute limited editions.

We begin the flight with a whiskey inspired by Britain’s historic 21-gun maritime salute. The Royal Salute 21 Year Old features a blend in which no single malt or grain whisky is less than 21 years old (and some are much older). This is the flagship expression in the Royal Salute portfolio, and like other Royal Salute offerings, it’s currently presided over by Sandy Hyslop, Director of Blending at Chivas Brothers.

Matured in ex-bourbon barrels and sherry butts, a gentle sherried spice greets the palate, quickly followed by sweet pears, a hint of soft vanilla, and citrus. A splash of water brings out more fruit characteristics, and a touch of smoke. ($283)

Introduced in 2017, this is the first in what will become an annual Royal Salute Polo Collection, honoring the King of Whisky’s close association with the sport of kings. Endorsed by Royal Salute Polo Ambassador Malcolm Borwick, the Polo Edition is lighter in style than Royal Salute 21, even though both are no less than 21 years old and 80 proof.

That said, the Polo Edition is brighter in texture and does not feature as pronounced a sherried nuance, which is instead supplemented by notes of honeydew melon, marzipan, and sweet, creamy toffee. Easily identifiable both visually and by taste, the Polo Edition comes in a distinctive blue-green Royal Salute flagon featuring an image of two mounted polo players in a heated match. ($140)

This version is only available in duty free stores, and was introduced in September 2016 to satisfy demand that could not be met for the 38 Year Old Stone of Destiny (which we tasted immediately afterwards).

Composed of single malts that are at least 32 years old, this expression was released to honor the events of 1603, when Scotland’s King James VI united three separate kingdoms to create the modern British monarchy. Fittingly, it is composed of whiskies from some of the most individualistic distilleries in Scotland, including Longmorn, Glen Keith, Tormore, and Caperdonich. We found it to be the most complex whisky of the flight, intricately intertwined with honeyed toffee, ginger, a vestige of dark chocolate, citrus, and an exceedingly long finish.

“I’m not sure I would add water to this,” Prentice said, “as it might result in a loss to some of its complex character.”

The flagon features a hand-hammered silver plaque and a black stone set on a silver crown that serves as the stopper. ($380)

This was by far our favorite of the flight, made more so by the fact that there is so little of it available. This 38-year-old blend takes its name from the centuries-old coronation stone used for the crowning of Scottish kings and queens, and which now resides in Edinburgh Castle.

A bit of history also resides in every Stone of Destiny flagon, as this blend contains single malts as old as 45 years. Sherried, dried fruit comes to the forefront, with a hint of smoke surrounding stewed apples, cherries, and a gentle floral undercurrent. It lingers on the palate long after the last drop has been swallowed, giving one ample time to admire the handsome 24 carat gold plated crest and crown of the decanter. ($874)

At 86 proof, and as the oldest Royal Salute in the line, the Royal Salute 62 Gun Salute was the most intense-tasting of the flight. It is also a blend that was so closely integrated it was difficult to separate many of the flavors. Moreover, the thick, velvety mouthfeel was more akin to an XO Cognac than a Scotch whisky. It was named after the Tower of London’s highest cannonade salutation—a 21-gun salute, followed by 20 additional shots acknowledging the Tower of London as a royal fortress, and a third 21-gun salute fired during royal celebrations, totaling 62 shots in all.

But with the 62 Gun Salute, the hint of smoke doesn’t come from cannon fire, but from the ancient single malts used in its deep, fruity blend, which includes some extremely old grain whiskies as well. Aged in a combination of ex-bourbon and ex-sherry casks, each sip brings an explosion of honeysuckle, leather, and a touch of marzipan, followed by a final volley of cherries and citrus in the finish. Only 1,500 one liter 24 carat gold-embellished Dartington Crystal decanters were produced in 2011.