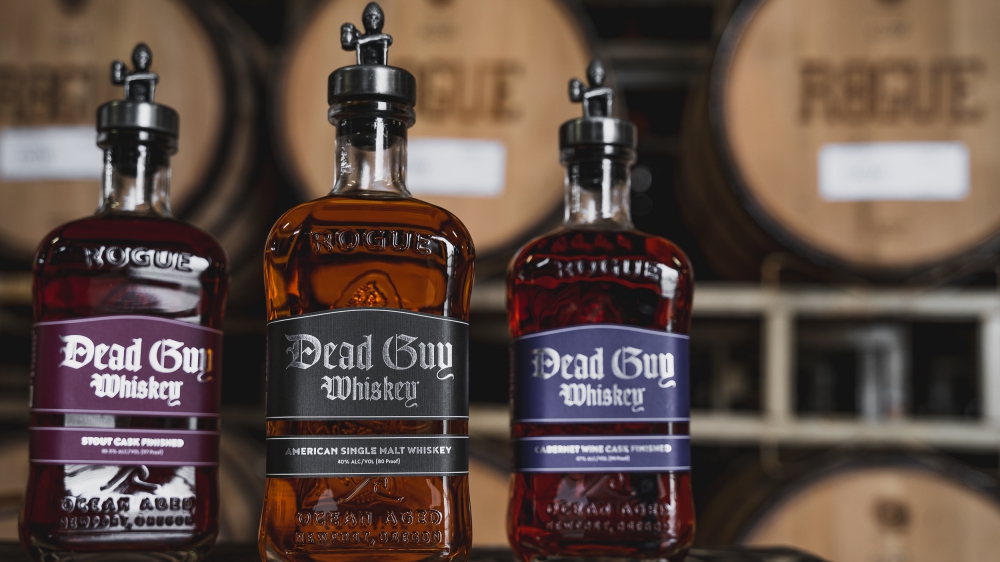 Beer and whiskey are intrinsically linked—the low-alcohol liquid that goes into the still after fermentation is often called “distiller’s beer,” after all. So it makes sense that many craft breweries have gotten into whiskey-making over the years, and one OG that has been at it for well over a decade now is Oregon’s Rogue Ale & Spirits.

Rogue Ale & Spirits was founded in 1988 by a trio of Nike executives, and what began as a brewpub now has locations in Oregon and Washington and products available across the nation. It’s perhaps best known for its core Dead Guy Ale, a German Maibock-style beer. That name carried over to its lineup of American single malt whiskeys when they launched 15 years ago, and it was just announced that the Dead Guy Whiskey lineup is getting a new bottle design, a rebranding and a new cask-finished whiskey. “As a leading producer of American single malt in the country,” said executive Steven Garrett, “it is a wonderful time to add new expressions and double down on this emerging category that we’ve been working to perfect for almost two decades.” And indeed the category is emerging, with the recent announcement that the TTB is one step closer to legally defining American single malt whiskey.

The whiskey is distilled from 100 percent malted barley onsite at the Rogue Distillery in coastal Oregon, and according to the distillery the particular climate in that area plays a part in developing the whiskey’s flavor as it matures. The core Dead Guy Whiskey is bottled at 80 proof and tasting notes call it “fruity and bright, with hints of dark cocoa, vanilla and molasses.” Dead Guy Whiskey Stout Cask Finished is actually a rebranding of the original Rolling Thunder Stouted Whiskey, finished in barrels made at the cooperage onsite that previously held Rogue stout beer. Finally, the Dead Guy Whiskey Wine Cask Finished is a brand-new expression, and Garrett had this to say about it: “We sourced freshly dumped wine barrels from the reputable King Estate Winery in Eugene, Oregon. Bold fruit notes are accentuated by a rush of dark plum, tobacco and peppercorn in this one-of-a-kind whiskey.”

There is also a Single Barrel Project in the works that, according to a statement, is meant to showcase the range of unique barrels that are built onsite at the cooperage. Dead Guy Whiskeys have won many awards over the past few years, so if you want to see what it’s all about for yourself you can order a bottle directly from the distillery or other online retailers.