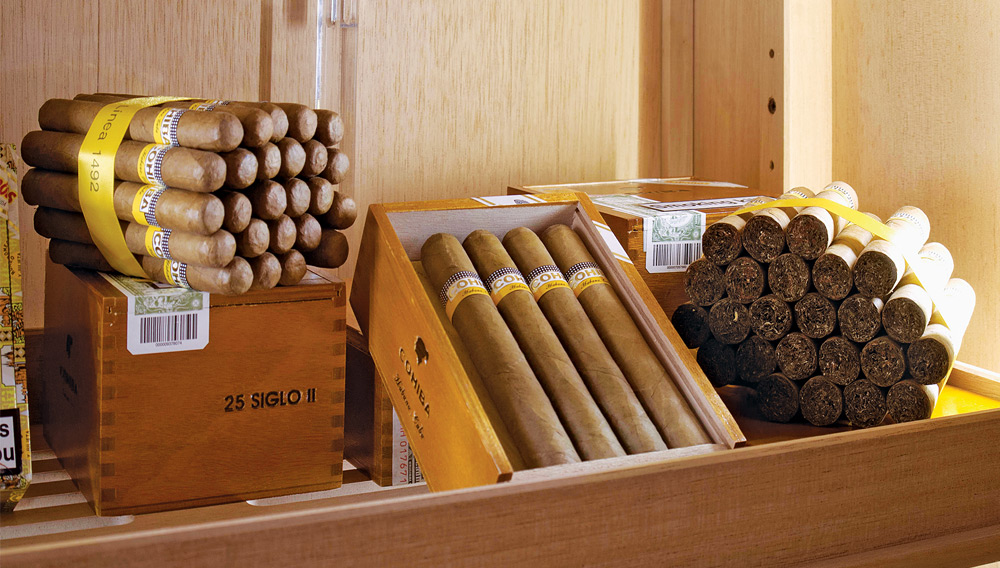 Beneath the awning at the entrance to the Wellesley, a new boutique hotel built on the original site of the Hyde Park Corner tube station, there are still vestiges of the old red subway tiles, and it is not difficult to imagine the many cigars puffed by waiting passengers so many decades ago. Just off the lobby, inside the hotel’s stylish cigar lounge, the sweet, thick smoke of well-aged Havana leaf proves that cigars are still very much a part of the city’s present-day culture.

Just seven years after “Black Sunday”—the day on which Parliament enacted a ban on indoor smoking—London has improbably evolved into a haven for cigar connoisseurs of all tastes. It is possible to visit some of the city’s oldest tobacconists, in shops that serve as portals to the Victorian era, or to soak in the ambience at a cutting-edge cigar lounge in a fashionable hotel. The law provides just enough flexibility for both to carry on: Tobacconists are allowed to have patrons “sample” their smokes on the premises, while the hotels have cleverly created legal outdoor smoking areas that are as inviting and well designed as any indoor space. Indeed, the city that invented the cigar lounge in the 19th century is reinventing it in the 21st.

We smoked and sipped our way through London’s most elegant cigar terraces and shops, from Oscar Wilde’s old haunt on St. James’s Street to a clubby terrace that serves a daiquiri infused with a Montecristo No. 4 to a luxurious lounge boasting the world’s largest selection of rare Cuban cigars. Most have a minimum charge of about $40 per person, which is approximately the price of one Cuban cigar. Any of these establishments would inspire connoisseurs to eagerly light up in a city where the historic smoke of a good cigar will not dissipate.

The Wellesley This art deco–style hotel located in Knightsbridge, which opened in 2012, is paradise for cigar connoisseurs. The lounge’s walk-in humidor is lined with a marble floor inlaid with a map of Cuba; a gold star marks the Vuelta Abajo, Cuba’s premier tobacco region. Its shelves display what is most likely the largest selection of rare Cuban cigars in the world, from a $1,320 Flor de Cano Diademas to a 2005 Cohiba Behike 40th Anniversary for $6,500.

On the outdoor terrace (although one would hardly know it is outdoors), the fanciful tables and upholstered chairs are warmed by both hanging heaters and heated floors. The chairs have been designed with armrests at the same height as the tables, to make sitting and smoking a cigar almost effortless. Custom-made copper cigar ashtrays, deep enough to prevent ashes from blowing away, are close at hand. The outstanding spirits collection in the adjacent Crystal Bar includes selections such as a 1767 Cognac. Even the hotel’s penthouse suite is outfitted with a 300-cigar humidor, as well as a private balcony and separate ventilation system. “We’re a small hotel, but one thing’s for sure: We’ve got the biggest cigar collection, the best Cognac collection, and the finest whiskey collection in the world,” says Khalid Affara, the Wellesley’s owner. “And if there is someone or something out there that’s better, then we will get something that will be even better than that.”

That attitude explains why Affara, unsatisfied with the superhot flame of most butane cigar lighters, is having a lighter designed exclusively for the hotel by S.T. Dupont. And not surprisingly, the Wellesley has its own Cuban cigar, made with the finest tobaccos rolled by Cuba’s top torcedors. Full flavored yet mellow, it is an ideal match for the Wellesley’s cedar- and honey-tinged private-label Hermitage 1975 Chez Richon Grande Champagne Cognac.

Pick up a copy of Robb Report‘s March issue, on newsstands February 25, or download the digital edition to read the rest of this article as well as all the content from this issue.