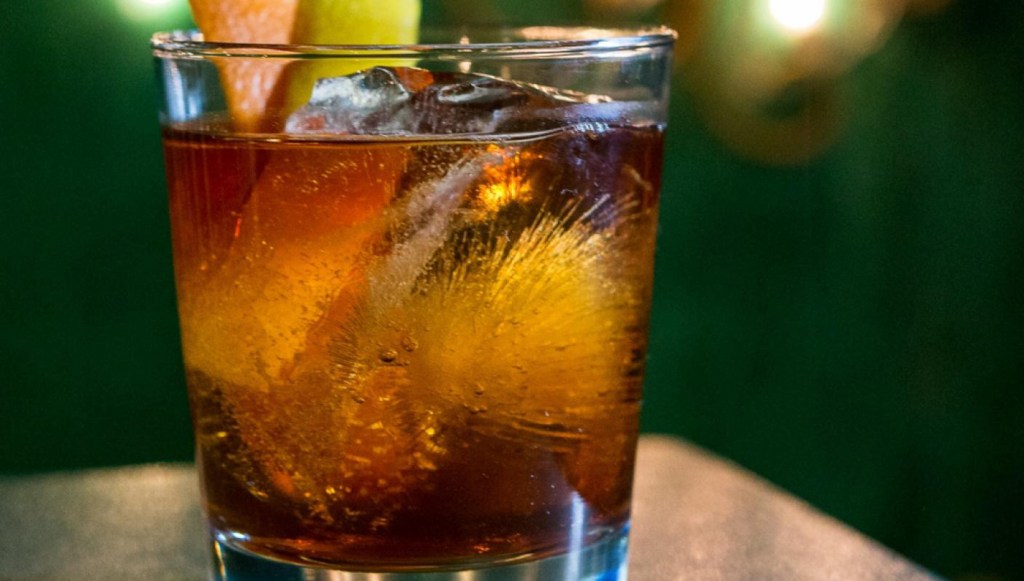 The Old Fashioned cocktail sports its name for a reason: It’s old. The name caught on as early as the 1880s, by which time the drink itself had already been around for at least several decades. In fact, the earliest known description of a “cocktail,” from 1806, is essentially the recipe for an Old Fashioned. To quote the Balance & Columbian Repository newspaper in Hudson, NY: “Cock-tail is a stimulating liquor, composed of spirits of any kind, sugar, water, and bitters….” Please note, however, that the recipe does not call for whiskey. And also be aware that, in 1806, America was rum country. In fact, from its earliest colonial days through the first decade of the 1800s, the production and consumption of rum was big business in the States. So it stands to reason that rum Old Fashioneds have been around for as long as the Old Fashioned itself.

At some point, however, for various social, political and economic reasons, rum fell out of favor, whiskey became the national hooch, and the Old Fashioned became a whiskey drink. And thus it stayed, through the 20th century and into the 21st. Now, however, as adventurous and history-minded bartenders and imbibers discover new ways to make old classics, the rum Old Fashioned is back in play. Robert Simonson, who literally wrote the book on the Old Fashioned (The Old-Fashioned: The Story Of The World’s First Classic Cocktail, available now), says, “Next to bourbon and rye, and arguably aged genever, rum is the most natural fit in the Old-Fashioned recipe template.”

This fact may not compute with a lot of folks who think of rum as a party drink rather than a sipping spirit. But a quality aged rum can be quite similar in character to whiskey. Simonson says, “The only steadfast rule is it should be an aged rum with enough breadth of flavor to carry of the drink. You don’t want a thin rum.” He also advises steering clear of sweeter rums, or else cutting back on the sugar. Puerto Rican rums like Ron del Barrillito are on the drier side, as are rums from New England such as Privateer and Thomas Tew. Simonson himself goes for longer-aged versions of Cuban mainstay Havana Club. “That’s rather unfair of me to recommend, as you can’t get the Cuban rums in the U.S.,” he says. “But that won’t be the case for long!” Amen, brother.

Sugar and bitters play an important role in the Old Fashioned; without them, after all, you’ve just got a glass of booze. In addition to plain old white sugar or simple syrup, other options include cane syrup, which lends a smooth, vanilla element to the drink; gomme syrup, which gives it a more velvety texture; and Demerara sugar, which has a subtle toffee/caramel flavor. For bitters, Angostura is a standby, which makes sense as it comes from the rum-producing island of Trinidad, and Angostura itself is a rum producer of considerable renown. Orange bitters (Angostura’s or, for a spicier, more complex flavor, Regan’s) are a nice change of pace.

The rum Old Fashioned is nowhere near as ubiquitous as its whiskey sibling, but it’s popping up on the menus of a number of watering holes nationwide. The surest place to find one is at a bar that specializes in rum. Rumba in Seattle, for instance, uses a combination of two rums by Plantation—the 5 Year Old from Barbados and Original Dark from Trinidad—along with allspice dram and bitters. Cienfuegos in NYC makes theirs with 12-year-old El Dorado from Guyana, cane syrup, and a mixture of Angostura and orange bitters. El Dorado is a Demerara rum, distilled from Demerara sugar, which gives it a rich, slightly smoky flavor. And Adrift Tiki Bar in Denver does an all-Angostura Old Fashioned, with 7 Year Old Angostura rum, Angostura bitters, and Demerara sugar. Angostura rum is quite sweet, so it’s tempered with Angostura’s own bitter amaro.

The Old Fashioned is nothing if not versatile, and bartenders are taking liberties with the classic  recipe. Tom Richter of Dear Irving in Manhattan created The Haitian Divorce, which was inspired by the rum Old Fashioned but adds mezcal and Pedro Ximenez sherry to the base of 8 Year Old Barbancourt rum and bitters. His Dear Irving cohort, Sarah Morrissey, created One Last Midnight, which uses two kinds of sweet vermouth as a spin on the sugar-and-bitters components, with Diplomatico rum from Venezuela as a base and a mist of Islay whisky for good measure.

Kenneth Vanhooser, of Piora in New York City, breaks the cardinal rule of Old Fashioneds by employing a white rum in his (off-the-menu, but he’s happy to make you one anytime) variation.  He uses Caliche, a dry Puerto Rican rum which, to be fair, is aged 3 to 5 years, with a small percentage of older solera-aged juice, but the color and much of the oakiness are filtered out. His bitters of choice is Peychaud’s, from New Orleans, which is slightly sweeter and fruitier than Angostura. When asked why he goes for such an unconventional recipe, he makes no apologies: “[The Old Fashioned] is the most open-ended recipe dating back to the beginning of the cocktail.  Simply stated in equation form, spirit plus sugar plus bitters plus water equals imbibable yumminess.”

For laymen looking to create their own, this non-bartender/rum Old Fashioned obsessive uses Old Ipswich Tavern Style rum (from Massachusetts) or Don Q Añejo (from Puerto Rico), along with a cube of standard white sugar and Angostura bitters. Both rums are dry enough to make a “Fruity Old Fashioned” variation, in which an orange slice and a cherry are added and then muddled with the sugar cube and bitters before the rum is poured in. With or without fruit, the result is so delicious, and so easy to make, that even the most catholic imbibers may crave little else. You’ve been warned.