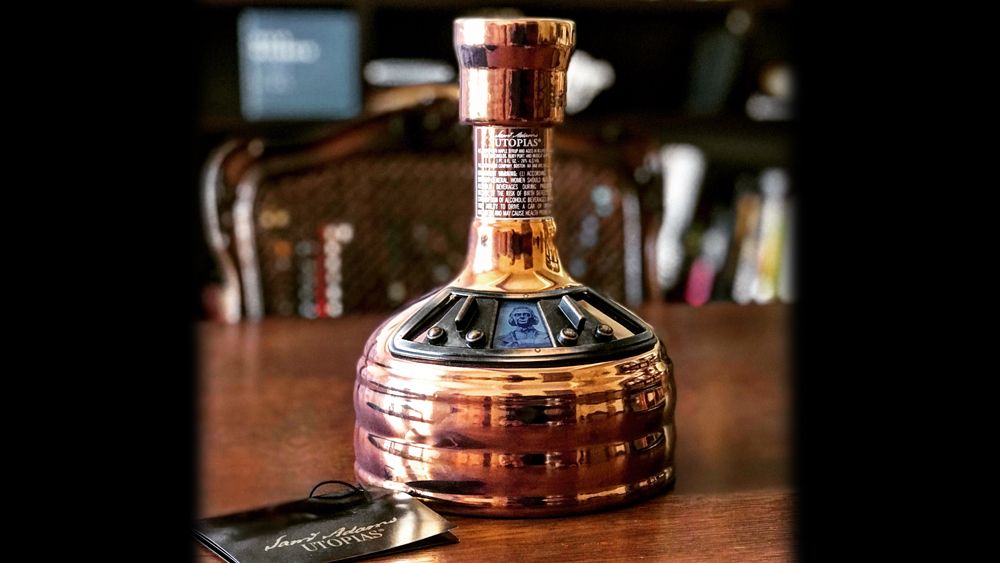 Before popping the top on the still-shaped bottle of Samuel Adams’ Utopias Beer ($200), it’s best to put aside any preconceptions you have about what beer tastes like. Utopias, a biennial limited edition that debuted in 2002, doesn’t resemble any other Sam Adams beer. In fact, it probably doesn’t look, smell, or taste like any other beer you’ve ever had. With no carbonation, a whopping 56 proof (their Boston Lager, by comparison, is 10 proof), and barrel aged in a variety of casks, it can seem like a fascinating hybrid of beer, wine, and liqueur.

To be clear, Utopias is a beer, although its alcohol content is high enough to make it illegal in a dozen states. It’s a blend of barrel-aged brew—including rare old Sam Adams and Utopias vintages—aged up to 24 years in everything from ex-bourbon barrels to port pipes to aquavit barrels, before being finished in Muscat wine barrels. Sam Adams founder and brewer Jim Koch employs a blend of bespoke yeast strains, among them one normally used in Champagne, plus one that’s designed to withstand a high-alcohol environment and keep fermenting.

One look at Utopias makes it obvious that this isn’t your standard glass of suds—in part because there aren’t any suds. In addition to the lack of carbonation, it sports a dark ruby color that’s closer to a port than a beer. On the nose and the palate, dry sherry notes come to the fore. The hops make their presence felt, but there are also sweet notes of molasses, dried cherry, and grape. The Moscat wine pops up on the long, lingering finish—the aftertaste is as close to wine as to beer.

Unlike a typical Sam Adams brew, Utopias is meant to be quaffed at room temperature. And at 24 ounces of 56-proof beer, it’s not meant to be consumed in a single sitting. A good thing too, as Utopias is released only every other year, and with just 13,000 bottles produced, you’ll want this one to last a while.