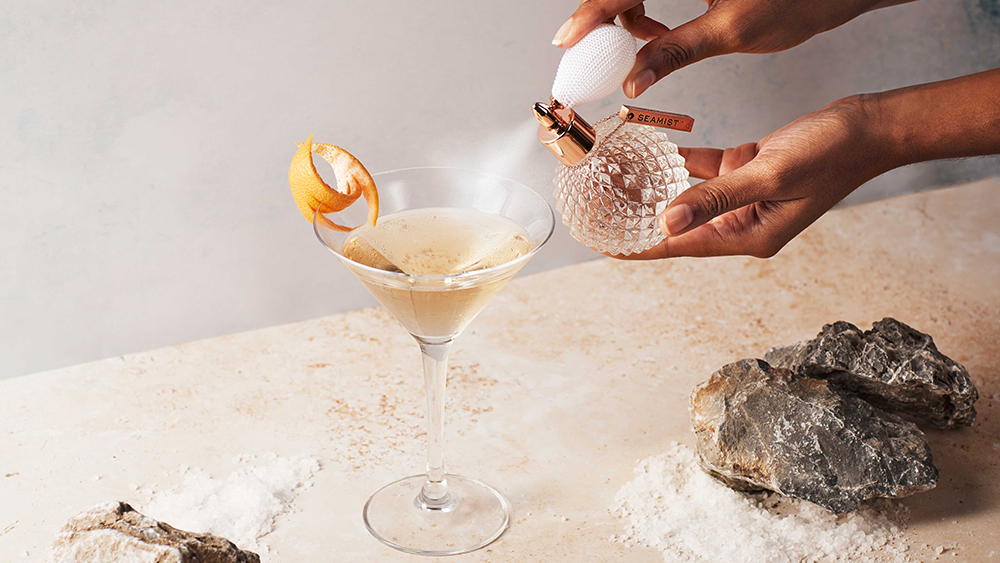 It was early morning walks by the beach with his dog, Tilly, that sparked the idea. Angus Lugsdin would breathe deeply of the salty, fresh air on the country coast of Devon, in England’s southwest. “It’s that amazing smell—the ozone, the brininess, the iodine from the freshly washed-up seaweed. When the temperature is right, I find that aroma intoxicating,” he tells Robb Report, “And I wondered if you could bottle that scent.” Since Lugsdin is the co-founder of Salcombe Gin, he tasked his team with finding out. Twelve months’ worth of experimenting later, he’s launching Seamist, an atomizer that offers an entirely new way to garnish any gin drink.

Think of that 60 percent ABV spritzer as an early morning clifftop seaside walk in a bottle. It’s made using a base of high-strength gin, to which the Salcombe team adds sea salt from Cornwall nearby. Gauging the Goldilocks level of salt was the team’s toughest challenge, per Lugsdin. Too little and the bracing snap was lacking; too much and it crystallized, clogging the atomizer. In the end, they settled on twice the strength of seawater.

To this salty gin base, the distillery adds botanicals, with a different recipe for each of the two versions. One features lime, coconut and orris root intended to complement London dry gins like Salcombe’s own Start Point, while the other, orange and rockrose-based version is ideal with pink gins, like its Rosé Sainte Marie. Lugsdin notes the difficulty of preserving the fresh saltiness through the process. “That’s a bit of the magic, as technically, the salt shouldn’t come through the distillation process,” Lugsdin says, so he adds samphire and black olives to the respective recipes to bolster the finished product’s umami-spiked saltiness, “They just add a little bit of that maritime air.”

The best way to deploy either Seamist is to spray it two or three times over the top of a freshly made gin and tonic. “The first sip you take as you bring the glass to your nose then has this blast of sea air,” he says, adding that it also works as an olive substitute in a gin martini. It could even be used as a subtler alternative to a salt-rimming on a margarita, coating the glass with an invisible, delicious layer.

The appeal, of course, isn’t just the flavor—it’s the theater, too. It guarantees an endless When Harry Met Sally moment, per Lugsdin. “When friends come round, and someone produces this to spray over drinks, it gets everyone talking,” he laughs, “And when customers in a bar see someone’s drink being misted, they look over and say, ‘I’ll have whatever they’re having’.”