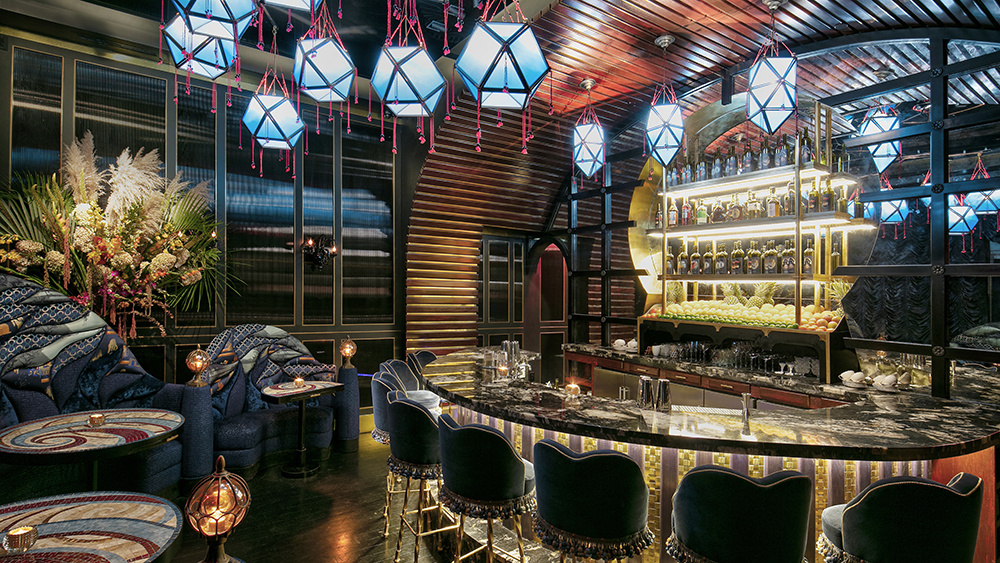 The waitlist for Michelin-starred Noda makes it a tough reservation to secure, and now the team behind the omakase experience is poised to make a similarly difficult-to-snag seat when it opens its intimate cocktail bar.

Shinji’s, which will have only 18 seats, is serving up a menu of nostalgic cocktails with fun twists, alongside small bites that pair beautifully with the drinks. Named after Shinji Nohara, or the “Tokyo Fixer,” it takes his immense knowledge about Japan’s restaurant scene and shapes it into a bar with uniquely American sensibilities.

The beverage director Jonathan Adler and the operations director Philip Dizard have collaborated on a playful drinks menu full of cocktails meant to transport you to the past. The Tropicana (a take on the screwdriver featuring vodka and house-made orange liquor) is served inside a frozen orange that takes six hours to make, with a red-and-white straw that evokes classic Tropicana orange juice ads. The Jackie Treehorn, meanwhile, is inspired by The Big Lebowski; it’s a White Russian but without any dairy or dairy substitutes, and it comes with a mini carpet coaster.

The rest of the menu is just as fun, with updated takes on mixology go-tos. The Dirtiest Martini is an extra-dirty Martini paired with a side of spiced powder, so you can customize it to your own tastes. Soba Cha Cha takes an Old Fashioned and switches out the whiskey for soba-infused vodka. And the Foie Gras Sidecar is made with foie-gras-washed Hennessy XO, with a foie gras tartlet on the side.

While the drinks are the real star at Shinji’s, the team has also prepared a tight menu of food to accompany the cocktails. The executive chef Shigeyuki Tsunoda is sending out uni chawanmushi with Ossetra caviar, seasonal Japanese crudo, hand rolls and a Wagyu sando.

All of that will be available at either the eight-seat bar or table-side bar carts. The moody space is decorated with blue velvet drapes and smoked black glass, with whimsical octopus touches helping to recall memories of the ocean. The drinks sure will taste better than saltwater, though.

Shinji’s opens Wednesday and will be open Tuesday through Saturday from 5 pm to 1 am.

Click here to see all the photos of Shinji’s.