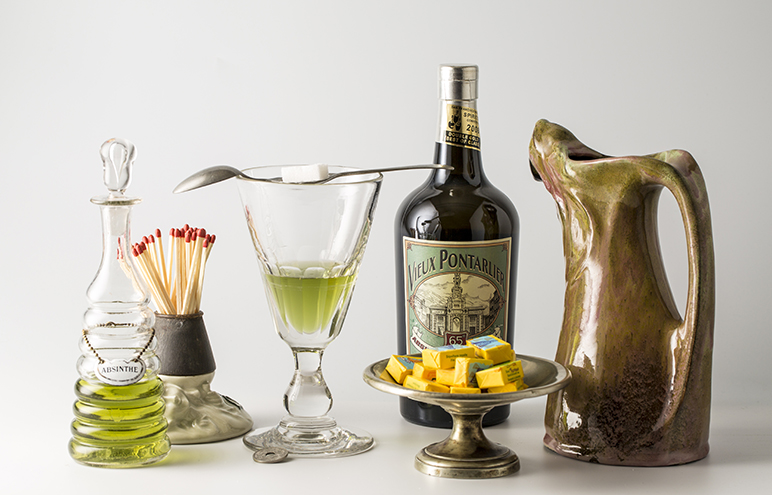 During one fleeting scene in the 2004 movie Van Helsing, the flames of a burning structure are reflected in a bottle of absinthe. It was a fitting symbol of the alleged hallucinogenic properties of one of the most feared yet revered spirits of the past, often referred to as la fée verte—“the green fairy.”

Starting in the 19th century, absinthe was considered a source of creativity, and some of this green liquid’s most prominent proponents included Vincent van Gogh, Henri de Toulouse-Lautrec, and Edgar Allen Poe. Absinthe was also viewed as having mind-altering properties—an effect attributed to wormwood, a bitter anise-tasting herb (distilled botanicals comprising the other ingredients). The real culprit was absinthe’s high 90- to 150-proof alcohol content. Nonetheless, even before Prohibition, absinthe became a banned substance.

Only since March 2007 has absinthe been approved again for importation to the United States, after scientific analysis proved that nothing in absinthe is detrimental—that is, aside from its high proof. Obviously, caution must be used when consuming this spirit, which today is most often employed in cocktails.

For a more dramatic effect, you can replicate the traditional “louche” drinking ritual, pouring a small amount of absinthe into a glass, followed by slowly trickling cold water over a sugar cube resting on a perforated spoon. The green liquid will turn a ghostly pale, and the alcohol will be diluted. Some restaurants, such as Sage at Aria in Las Vegas, perform this louche tableside. Or you can create this simple drink at home with a quality absinthe, such as any of our three top picks.

How to Watch Prince Harry and Meghan Markle’s Oprah Interview

Metro Pictures Gallery, Which Represents Cindy Sherman and Other Top Artists, to Close