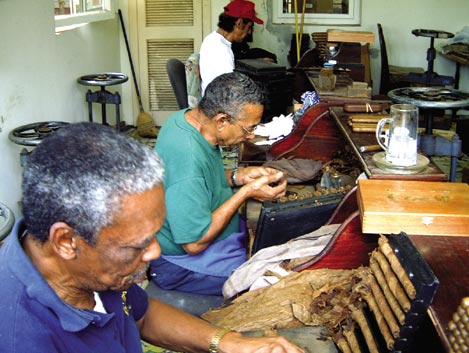 You will need plenty of bravado for your cigar-rolling lesson at Graycliff Hotel’s cigar factory in Nassau, The Bahamas. After watching old-time Cuban leaf artists as they bunch, roll, and press tobacco with fluid grace and precision, you can join them at the bench. As a novice roller, you are humbled as you take the supple blend in hand and try to follow a master roller as he demonstrates how to keep a steady pressure. Never again will you take a simple handrolled blunt for granted. “We work only according to the old tradition here,” explains Avelino Lara, creator of the original Cohiba and a former personal cigar roller for Fidel Castro.

Now 80, Lara was coaxed out of retirement in 1998 to help create Graycliff Cigar Co., which produces about 450,000 handrolled cigars a year, ranging from a fruity 5-inch panatela to a spicy 73⁄4-inch gran corona. Lara oversees the blending and maturation of the tobaccos. Filler comes from Nicaragua, Honduras, Ecuador, the Dominican Republic, and Brazil; the binder and wrapper are grown in Ecuador from Sumatran seedlings. The leaf is triple fermented, slowly matured to purge the last whiff of harshness. In June 2001, Graycliff launched its Professionale blend, Lara’s tribute to the 1960s Cuban tobaccos. Last fall, France’s Club Cigare magazine named Graycliff’s Pirate its cigar of the year.

Graycliff owner Enrico Garzaroli, the scion of an Italian hotelier family, has operated the resort and its five-star restaurant since the 1970s. The original 14-room resort and restaurant occupy a fortress-like mansion built above Nassau harbor in the 1740s by pirate John Howard Graysmith. Once Garzaroli brought Lara on board, he annexed the adjoining 18th-century plantation house to create what he calls the only cigar factory in the world where you can also sleep and dine.

It is a milieu crafted for lovers of fine cigars—friendly and absorbing as a good Churchill. Six suites above the rolling room have lounges for enjoying a cigar or a book (or both), and balconies overlook the tobacco leaf–shaped pool. Doors are made of hand-carved cedar, as if the rooms were humidors. Long cedar matches are at the ready next to ashtrays. You can order a poolside lunch, perhaps roast pork with black beans or Chilean salmon seviche, from the Humidor, the factory’s Cuban-style bistro. Forget downtown Nassau, which is just a five-minute walk, and while away the afternoon in the gardens with a robusto redolent of chocolate and fruit.

At sunset, stride over the bridge to Graycliff’s dining rooms, where you might find Señor Lara deftly rolling a Lanceros-style Graycliff Elegante. The restaurant’s formality is a perfect counterpoint to the sumptuous but casual quarters of the cigar wing. Its cellar harbors such gems as an 1875 Château d’Yquem, but a bone-dry white Bergerac is a better companion to chef Phillip Bethell’s signature crawfish in puff pastry.

Afterward, as the waiter fetches your Cognac, a Graycliff cigar sommelier will approach with a tray of after dinner smokes selected to complement the feast you have just finished. He offers some Graycliffs, some Cubans, a Dominican, a Nicaraguan. You eye the elegantly tapered torpedo.

“What, sir, is your pleasure?”

A Pirate, naturally, in honor of John Howard Graysmith himself.