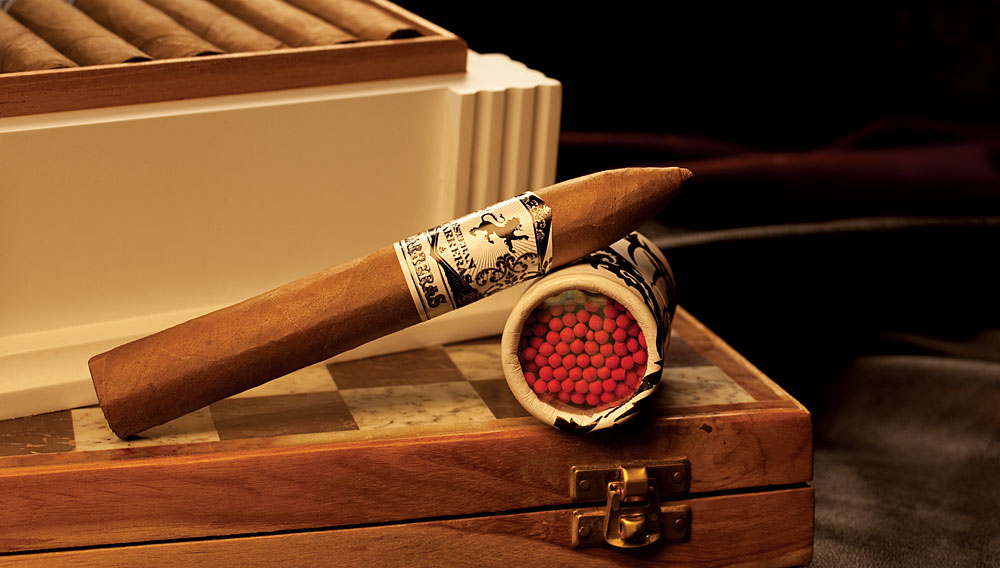 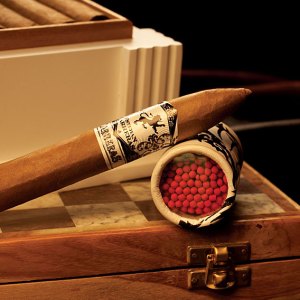 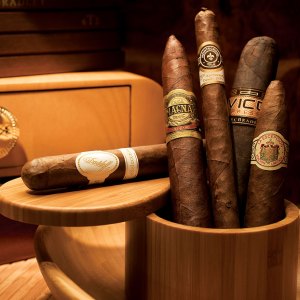 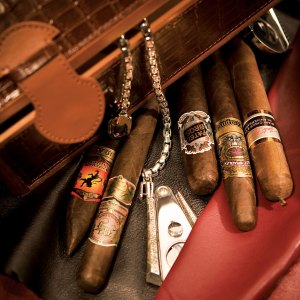 The gloomy global economic environment has not deterred cigar enthusiasts from pursuing the perfect premium smoke. In fact, the glow of a good cigar, accompanied by a snifter of spirit, can brighten even the dourest day on Wall Street. This is true any time of year. But particularly during the holidays, the pleasures of hand-rolled tobacco offer welcome cheer—especially when shared with friends as a gesture of hospitality or as a gift. Holiday cigar shoppers should take note of trends this year. The once popular Churchills have given way to robustos with even shorter lengths—a development that suggests fewer of us are finding the time to indulge in a one-hour smoke. Most of these shorter offerings, however, have retained large ring sizes (diameters) to deliver the fuller flavor of a larger cigar. This demand for intense flavor illustrates another trend: the quest for assertive smoke. More aficionados are seeking tobaccos with presence that retain their more subtle nuances. This mix of traits can be found in the growing number of medium-to-strong cigars that are displacing the lighter blends on the shelves of tobacconists’ humidors. But these more delicate indulgences still have their devotees, so we have included some examples in our recommended list, which is arranged in order of strength, from lightest to fullest.

LET THERE BE LIGHT

Camacho has never been known as a lightweight; but not everyone wants to puff powerhouse Honduran cigars all the time. The first collaboration between Camacho and the Oettinger Davidoff Group, which recently acquired the Camacho brand, this new cigar has a toned-down taste profile. The silky Ecuadoran-grown Connecticut wrapper, combined with a Honduran binder and Honduran and Dominican filler, provides an easy draw and an ethereal flavor that will entice those who find themselves, as it were, attracted to the light. Six sizes are available, but the 6 x 50 toro is our favorite. This is definitely a daytime cigar, and it pairs well with Glenlivet 12 Year Old single-malt whisky. ($6.15–$7.50) www.camachocigars.com

Cuban folk hero Esteban Carreras defied the newly formed Castro regime by attempting to organize the tobacco farmers and cigar makers whose property was being nationalized. Although Carreras was captured and killed, his name lives on with this brand. One of its best cigars, the Esteban Carreras Connecticut, is made in the Dominican Republic’s La Aurora factory and expresses a light, herbal creaminess. Rolled inside Ecuadoran-grown Connecticut-seed wrapper, the Dominican filler carries a single ligero leaf for a hint of spice. This cigar makes a good match for the 1995 Knappogue Castle Irish whiskey. ($4–$9) www.estebancarreras.com

MEDIUM IS THE MESSAGE

The cedar-scented, all-Nicaraguan Casa Magna Colorado created by Manuel Quesada and Nestor Plasencia garnered Best of the Best accolades in the June 2009 issue of Robb Report. As an encore, the top-grade expatriate Cuban rollers at Plasencia’s Segovia factory in Estelí have skillfully handcrafted a 7 x 58 salomon—one of the most historic and difficult-to-make of the old Cuban cigars—dubbed the Extraordinario. Its perfecto-on-steroids shape enhances the flavor and medium body of the award-winning Casa Magna. Pair this cigar with Pusser’s 15-year-old rum. ($10.75) www.casamagnacigars.com

This cigar’s name refers to the vice press used to create box-pressed cigars. These superb smokes are handsomely box-pressed by the Tobacos de Oriente factory in Danlí, Honduras. The Nicaraguan wrapper from Jalapa lends a meatiness to the flavor profile, which is peppered by a double Costa Rican/Colombian binder and tempered with Nicaraguan, Mexican, and Honduran filler. Three shapes are available, but the 7 x 60 figurado is our preferred choice. Enjoy it with Blanton’s single-barrel bourbon. ($7.50–$8.40) www.alecbradley.com

This cigar’s name recognizes the birth year of cigar impresario Rocky Patel. With its Ecuadoran Habano wrapper, Nicaraguan filler, and Honduran binder, the 6½ x 52 Rocky Patel 1961 toro smokes with a rich smoothness that carries hints of curry and cinnamon. It is a perfect match for the just-released Parker’s Heritage Collection Golden Anniversary Bourbon, which combines barrels from each of the past five decades. ($8.50) www.rockypatel.com

This Dominican brand, which originated in Cuba, has dramatically ramped up its blend in celebration of the firm’s 75th anniversary next year. The new formula developed by expert blender José Seijas consists of an Ecuadoran Habano wrapper and Honduran and Nicaraguan filler. Five sizes ranging from lancero to Churchill are available. Special anniversary packaging includes boxes of five, 25, and 150 in numbered commemorative chests. Moreover, Montecristo offers a limited-edition freestanding humidor that holds 750 cigars. This Monte definitely goes with the Johnnie Walker Gold Label. ($15–$18.50) www.altadisusa.com

This name is longer than the cigar, but each of these 4 x 62 snubbies packs a lot of flavor into what amounts to a 15-minute smoke. A quarter of an hour is plenty of time to enjoy the distinct characters of these four Mexican blends. The Cuba, with its Cuban-seed tobaccos, emphasizes smoothness; the Dominican is spicy and mellow; the Nicaraguan is meaty; and the Honduran is robust. Each should be paired with a complex, extra-añejo tequila like Don Julio 1942. ($4.75) www.altadisusa.com

Although the recently revived La Escepción brand recalls its origins with packaging inspired by its original Cuban packaging, the brand nevertheless enters a new realm of flavor with this latest iteration, which incorporates Ometepe tobacco in both the binder and the filler. As a result, sweetness wells up with the very first puff, and a sophisticated strength grasps onto the Habano Talanga wrapper. The band, which is dated 2009, suggests that this is the first installment of what may be an annual offering. Experienced smokers will best appreciate this cigar with the enhanced oak and sherry flavors of The Macallan 25 Years Old whisky. ($5.99–$6.39) www.cigarworld.com

The original San Cristobal was created in 2007 for Ashton by José “Pepín” Garcia, who supervised cigar making for Habanos before relocating to Nicaragua. This newest small-batch production features select sun-grown wrappers from Garcia’s Nicaraguan farms. Its deliciously thick, smooth flavor is accented with a deeply aromatic, almost flowery undertaste and bouquet. One can easily smoke this Nicaraguan down to the band. Available in 5, 5½, and 6 inches (all at 52 ring gauge), this offering is eminently worthy of the Springbank 18 Year Old whisky, which is distilled two-and-a-half times. ($8–$8.50) www.ashtoncigar.com

Wrappers used to be grown, not made. But today there are so many hybrids that the choice of wrapper has become almost overwhelming. That was certainly the case during the formulation of the Davidoff Seleccíon 702, named for the seed from which the final wrapper is grown. “We had so many good seeds and good crops, from which I could only pick five out of 16,” says Henke Kelner, Tabacos Dominicanos’ owner and Davidoff’s master blender. The result is an ultra-oily sheen and a hearty taste that resembles a Honduran, even though this is a decidedly Dominican cigar. As such, it pairs nicely with a refined yet muscular Cognac like the just-released Pierre Ferrand Vintage 1972 Cask Strength. ($26) www.davidoff.com

This 7½ x 56 Nicaraguan puro with a Cuban pig-tail cap is made by the indomitable Pepín Garcia. The limited release comprises two sets of 1,000 boxes containing 20 cigars each; the first set uses a spicy rosado wrapper, while the second set of cigars is wrapped in dark, chocolaty oscuro. The flavors of both versions are rich and pungent, but not as robust as their muscular shape might suggest. A gentle giant, the Danno was named after the late son of Nestor Miranda, proprietor of the Miami Cigar Company (which markets this masterpiece). The oscuro version goes exceptionally well with a snifter of Glenmorangie Signet. ($9) www.nestormirandacigars.com

The success of the Casa Magna Colorado led the brand’s creators, Manuel Quesada and Nestor Plasencia, to seek a successor. But the Nicaraguan factory that produces Casa Magna was at full capacity, so Quesada and Plasencia turned their attention to Plasencia’s factory in San Marcos, Honduras. After seven weeks of blending they created the Casa Magna Oscuro, which is wrapped in a dark, smoky, but not-quite-maduro Jamistran leaf and available in five sizes. The 6½ x 52 belicoso is our favorite. A Zacapa Centenario 23-year-old rum complements the cigar’s thick taste. ($5.75–$7.95) www.casamagnacigars.com

Another notable smoke from the Esteban Carreras line, this box-pressed Nicaraguan puro gets its name from its 10-year-old wrapper, which is available in maduro and natural. Filler and binder tobaccos are aged six years—significantly longer than most premium brands. The natural wrapper exudes an aroma of milk-soaked hay, while the maduro’s scent is an interesting medley of heavy cream and sweet smoke. A difficult shape to roll, the pyramid forms an ash that won’t let go—a tribute to the factory of Abdel Fernandez, once a protégé of Cuba’s legendary Don Alejandro Robaina. Pair the natural wrapper with Michael Collins Single Malt Irish whiskey; the maduro nicely complements Bushmills 21 Year Old Malt. ($8–$10.50) www.estebancarreras.com

One of Alec Bradley’s most celebrated blends, the Tempus is a Honduran puro with tobaccos grown in the fertile Las Trojes region near the Nicaraguan border. The 6¾ x 54 Magistri pyramid is the newest offering in the Tempus line—a rich, semirugged, and spicy smoke for those who have the time to enjoy it. Consistent from beginning to end, it is especially well suited to accompany a glass of Rittenhouse 23-year-old single-barrel rye. ($10) www.alecbradley.com

Cigar makers often pay homage to their familial ties, as is the case with the Patel Brothers brand, a collaboration between Rocky Patel and his brother Nish. The cigars’ rugged Pennsylvania broadleaf wrapper and Nicaraguan binder and filler provide a powerhouse smoke, especially in the 6 x 58 super toro. Complement this hefty combination with a glass of Booker’s unfiltered cask-strength bourbon diluted by a single ice cube. ($6.50–$9) www.rockypatel.com

The Punch brand originated in 19th-century Cuba and took its name from a popular British humor magazine. The firm’s Upper Cut, which may eventually become a separate brand, represents a departure from Punch tradition, even in its packaging. The box, for example, is labeled Upper Cut by Punch. The cigar won’t knock you out, but it will get your attention. The Upper Cut is available a 6 x 45 gran corona, a 5¼ x 50 robusto, and a 6? x 54 toro. Try it with the Talisker Distillers Edition single malt, which is double matured in Amoroso sherry casks. ($6.49–$6.99) www.cigarworld.com

Due to a conflict with another tobacco entity, Pepín Garcia has renamed his new Nicaraguan factory My Father Cigars—a choice that underscores the importance of families in the cigar business. The all-Nicaraguan Le Bijou 1922 (the name combines the French word for “jewel” and the birth year of Garcia’s father) is smooth, elegant, and seamless. It comes in three sizes: a 6 x 52 toro, a 7 x 50 Churchill, and a 4½ x 50 petit robusto. All three pair best with a classic Hennessy X.O. ($12–$14) www.myfathercigars.com