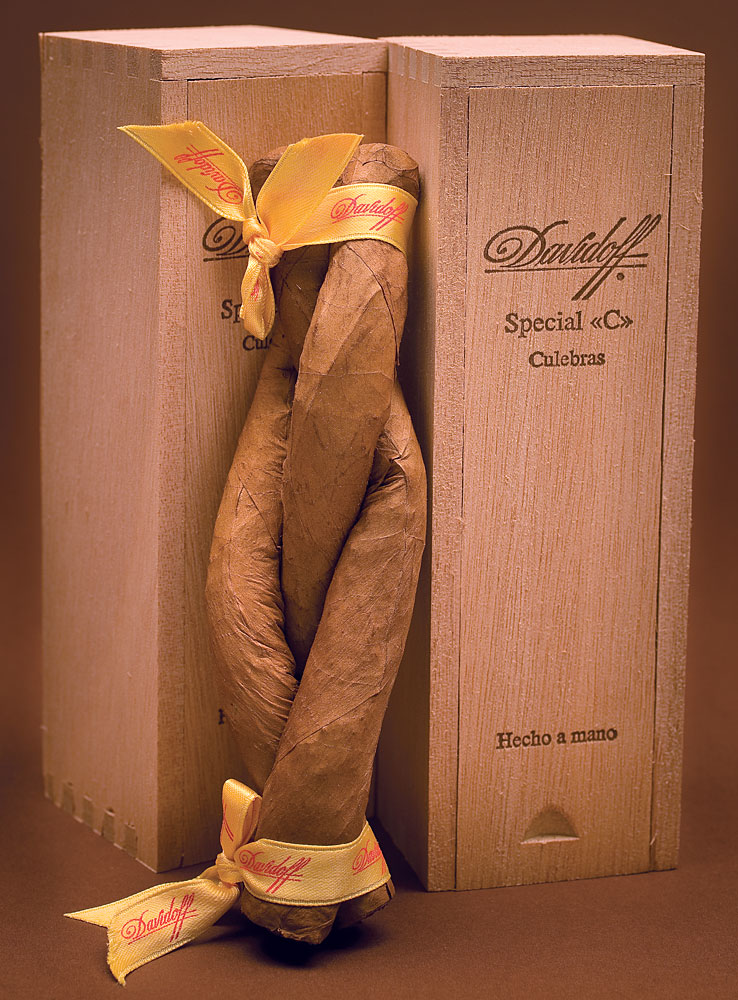 The unusual shape of the culebra invites conversation—or at least questions—about the cigar and exactly how one smokes it. The culebra is actually three cigars in one, a trio of long, thin panatelas that a torcedor twists together, like strands of a rope, while the tobacco is still moist and pliable. But we caution against attempting to light all three of the cigars at once; first remove the ribbons at both ends and separate the cigars, then smoke them individually. Lighting even one of the twisted panatelas can prove a challenge—as can holding it—which might explain why the culebra has never been particularly popular.

For this reason, the cigar is somewhat difficult to find. A decade ago, Partagas and H. Upmann were making culebras in Cuba, as were Hoyo de Monterrey in Honduras, Calixto Lopez in the Philippines, and Villiger in Switzerland. Today, only Partagas still makes a Cuban version of this shape, and the Villiger is the last of the European-made culebras. In the Dominican Republic, La Flor Dominicana makes a 6½ x 30 culebra and a slightly thicker 7 x 38 culebra gorda. Nicaragua’s Drew Estate produces an appropriately named Medusa 6 x 44 maduro culebra. But none of these cigars are produced in great quantities.

The latest addition to the culebra canon comes from Davidoff. The 6 x 46 Special C, which sports a silky Ecuadorean Connecticut wrapper and a specially fermented Dominican filler and binder, has a surprisingly easy draw. It burns with a consistency indicative of its lengthy 21 months of aging in cedar vaults. The flavor is rich and meaty, a perfect match for a medium-bodied single malt or an XO Cognac. Each culebra is enclosed in an individual cedar case, packed eight to a box (for a total of 24 panatelas), that sells for about $384.

The culebra, whose name means “snake” or “serpent” in Spanish, has its origins in 19th-century Cuba, when a torcedor traditionally received three cigars at the conclusion of each workday. But it became evident that, as their shifts ended, the rollers were leaving with far more than their daily allotments. To control the inventory shrinkage, the factories began requiring the rollers to twist their three cigars together and fasten them with twine. The bulky shape made the cigars easy to spot, and anyone caught leaving the premises with more than one of these culebras, or with cigars that were not bound together, was suspect.

Like the culebras that compelled those Cuban rollers, the Davidoff Special C now presents the rest of us a compelling reason to add a new twist to our postprandial smoking.