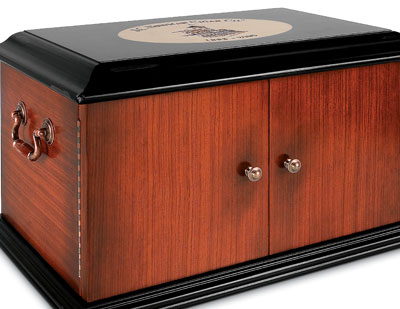 Hannah Newman is said to have objected to her son’s rolling cigars in the family barn because it left the taste of tobacco in the preserves that she stored there. Nevertheless, “Hannah, the Boss,” as her family affectionately referred to her, helped jump-start J.C.’s business in 1895 by issuing an ultimatum to the local grocer in Cleveland, Ohio: Unless he purchased cigars from her son, she would take her business elsewhere. One hundred ten years after receiving the grocer’s order for 500 perfectos, the J.C. Newman Cigar Co., one of this country’s two remaining family-owned cigar manufacturers (from among the thousands that operated at the turn of the last century), is commemorating the anniversary of its founding by offering the limited edition 1895 Series.

The 5-inch-long, hand-rolled cigar has 40-ring-gauge perfecto tips and swells to a thick, 52 ring gauge in the middle. The cigar’s flavor intensifies as the ash burns toward the fully packed center. Like all Newman premium cigars today, the 1895 is made in the Dominican Republic by the Fuentes family. (The Newman company produces 35,000 machine-made cigars daily in its Tampa, Fla., factory.)

The four versions of the 1895 Series include Diamond Crown, which features a Connecticut shade wrapper that has aged for five years; Maximus, a slightly stronger version of the Diamond Crown, with an Ecuadoran sun-grown wrapper; the mild Cuesta-Rey Centro Fino; and the Cameroon leaf–wrapped, spicy La Unica. Each cigar is sealed in a glass tube adorned with an engraved copper band that reads “J.C. Newman 1895–2005.” The cigars are available only as a set of 40 (10 of each version) packaged in a commemorative humidor. Newman is producing 250 humidor-cigar combinations priced at roughly $1,200 each.

The 1895 Series, in addition to being a fine smoke, is the latest example of the Newmans’ marketing savvy, which has sustained the company while so many others have failed. In 1917, J.C. pioneered machine rolling of long-filler cigars, thus introducing a cost-efficient means of producing a high-quality product. In 1932, the company became the first to package cigars individually in cellophane—instead of in foil or leaving them unwrapped—to better protect the tobacco wrapper. During the Depression, when the average price of a cigar was 10 cents, Newman produced a smaller size that sold for 2 cents. “It was something people could afford,” recalls J.C. Newman’s 89-year-old son, Stanford, who serves as the company’s chairman of the board.

More recently, to celebrate the company’s 100th anniversary in 1995, the Newmans introduced a superpremium cigar called Diamond Crown and limited its sale to two per customer. Two years ago, Newman recognized the trend toward stronger blends and released the full-bodied Maximus. “You really have to sit down when you smoke it,” Stanford says with a laugh.

Next year, Stanford celebrates his 90th birthday, which the family no doubt will greet with presents, cake, lots of candles, and perhaps another special edition. After all, throughout its history, when the occasion has called for a cigar, Newman has produced it.