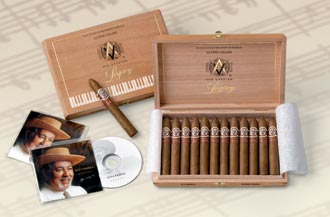 Erudite, urbane, and nattily attired, Avo Uvezian is the consummate cigar smoker. Or more precisely, he represents the romanticized version of the cigar smoker. A performer nearly all of his 78 years, Uvezian, the creator and spirit of Avo cigars, understands how to play a role and how to cultivate an image: His eight white Brioni suits and ever-present straw hat serve a purpose. “People stop me in the street; they recognize the hat,” says Uvezian, whose tanned and weathered face belies a life in the sun. As for the white suits, he adds, “I spend a lot of money on Brioni suits because cigar smoking is a lifestyle.”

Uvezian’s carefully selected wardrobe notwithstanding, his lifestyle—that of the gentleman cigar connoisseur—is innate. His persona, which lends the cigar brand its patrician aura, is authentic, one formed over the course of an extraordinary life. “Having my image behind the product makes a big difference,” Uvezian notes, “but the image is nothing if there is no substance behind it.”

When he speaks, it is in a peculiar accent that intimates an exotic past. Indeed, the sound is the amalgamation of the nine languages Uvezian speaks (“so far,” he adds): French, English, German, Italian, Arabic, Armenian, Turkish, Spanish, and Farsi. Uvezian, who is of Armenian descent, grew up in Lebanon, where he trained for a career as a classical pianist. He toured the Middle East and Asia with a jazz trio as a teenager before emigrating in 1947 to the United States to study at the Juilliard School. A tour of duty as a U.S. soldier in Korea briefly interrupted his concurrent careers as a piano player, real estate investor, and jewelry designer.

In 1974, piano playing became his primary pursuit, when, instead of returning home to Long Island from a business trip to Puerto Rico, he parlayed a four-month piano-playing engagement at the then-new Palmas del Mar resort into a 14-year career. By this time, Uvezian had developed a taste for cigars, and he commissioned a personal supply from Hendrik Kelner, a fellow aficionado and Davidoff’s master tobacco blender. Soon, patrons at the resort began requesting his cigars nearly as often as they did his songs. However, Uvezian did not consider entering the cigar business until his 5-year-old daughter, Karyn, suggested that if people liked his cigars so much, he should sell them. The father concurred.

By 1986, Kelner had expanded the annual production of Uvezian’s cigars to 100,000. Davidoff began selling hand-rolled, Dominican-made Avo cigars in the United States in 1988 and bought the Avo brand outright in the late 1990s for a reported $11 million. Today, Kelner oversees the annual manufacture of some 3 million Avo cigars for the Classic, Maduro, XO, Domaine, and Signature series.

As the personification of the brand, Uvezian travels to dozens of countries promoting Avo cigars. Such a schedule leaves little time for music. With the recently released medium-strength Avo Legacy Limited Edition, however, Uvezian combines songs with smoke. The 12-count boxes of corona extras (5¾ x 48) include Legacy, a 12-song CD written and performed by Uvezian. “I always wanted to do my own CD, but I am a very tough critic,” he says. The music represents a cross section of styles, ranging from a ballad about becoming a new father to a boogie written for a favorite tobacconist. “Cigar smoking is my lifestyle,” Uvezian says, “but my passion, first and foremost, has always been music.”