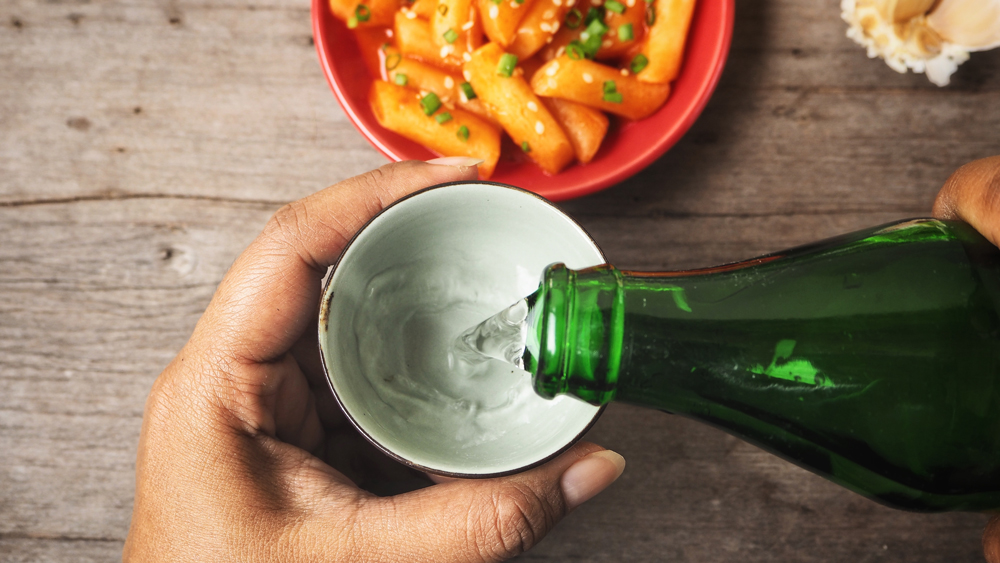 The goal of every athlete competing in the Winter Olympics in South Korea is to be No. 1 in the world. For throngs of spectators attending the games, however, the primary objective will be to have a good time. To that end, over the next two weeks, a great many revelers in PyeongChang will more than likely partake of a colorless, odorless local beverage that just so happens to be the world’s No. 1–selling liquor. Let the games begin and the soju flow!

The Korean word “soju” translates to “burned liquor,” but don’t let that mislead you. There’s no such thing as smoky soju. Indeed, the defining characteristic of this wildly popular drink—often referred to as “Korean vodka”—is that it tastes like . . . nothing.

For centuries, Koreans have been making soju from fermented rice using homemade stills. It wasn’t until 1924 that a company called Jinro began producing soju en masse, setting the stage for eventual world domination. In the beginning, Jinro (now known as HiteJinro) bottled its signature spirit at around 35 percent alcohol by volume, but in 1965, a massive food shortage prompted the South Korean government to ban the use of rice to make alcohol. The Grain Management Act remained in effect for 26 years, giving rise to diluted, lower-alcohol (around 40 proof) soju distilled from fruit and other starches that remains the most widely available style today. But the better-quality soju made from rice and other grains is out there. HiteJinro is the world’s largest soju producer, and its Chamisul variety, Korea’s best seller, is excellent. Other widely available premium brands of soju include Hwayo, Chum Churum, and Andong.

In Korea, soju is as indispensable a component of the nightly dining ritual as table wine is in Italy; its simple flavor profile makes it an ideal complement to complex Korean cuisine. It’s usually served chilled in small, traditional glasses, and once a bottle is opened, no one leaves the table until it’s empty. Custom dictates that no one pours their own soju and that it is to be dispensed and received using two hands. The first shot should be downed in one gulp, again with both hands on the glass. Out of respect, the most senior person in the group drinks first.

America only accounts for roughly 5 percent of soju sales globally, but that number is on the rise. Since soju falls under the same regulatory classification as wine in many states, it’s especially popular at establishments that hold beer and wine licenses, where it’s used as a substitute for light spirits in cocktails. Among the more notable places to enjoy soju in the U.S. are Kori Tribeca and Bar Moga in New York City, Dan Sung Sa and Thirteen XIII in Los Angeles, and Daikaya in Washington, D.C.

But if you really want to go for the gold, cheer on the Americans in person by hopping a flight to Seoul, where the soju flows continuously at virtually every place in town.