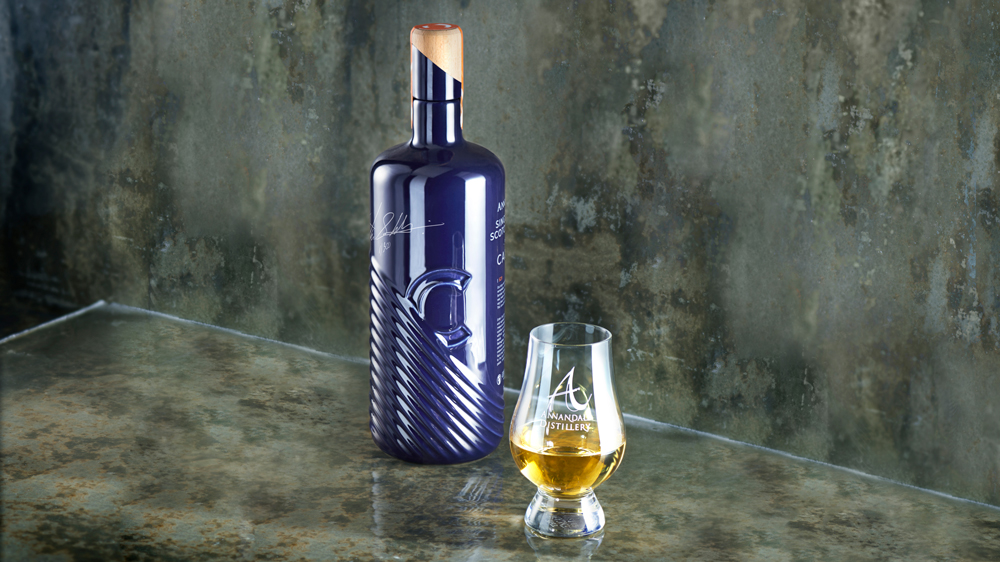 There have been prior collaborations between whisky distilleries and design studios, but perhaps nothing so serendipitous as the brand-new Callum 529 by Annandale. As the name implies, this single-cask single-malt scotch was distilled at Annandale in Scotland’s Lowland region. It’s the creative effort of distillery co-founder David Thomson and renowned designer Ian Callum CBE.

Callum is known for his work in the automobile industry, designing cars like the Aston Martin Vanquish, Vantage and DB9, as well as Jaguar’s F-Type, F-Pace, XJ and award-winning, electric I-Pace. He is now the design director of his own eponymous Callum studio, working on projects with like-minded partners from the motorsport, consumer automotive, art and fashion worlds.

Callum and Thomson originally met as teenagers while attending school together, reconnecting after nearly 50 years to work on the spirits release. “This collaboration with Annandale fits Callum’s notion of taking on projects that challenge, excite, tell a story and span all areas of life,” said Callum. “It’s very much a passion project with a story that goes back to my time at school with David Thomson. As with all our projects at Callum, engineering and design run in parallel—but in this case, it’s the whisky that is engineered. The result is . . . something fun and unique.”

The expression is the result of a partnership between Annandale Distillery’s co-founder David Thomson and designer Ian Callum, former classmates as teenagers.  Leo Bieber, courtesy of Callum.

The bottle design is an unconventional spin on the familiar, a blue ceramic decanter with a natural cork that is meant to create a one-of-a-kind acoustic note when removed. According to Callum, the point was to break with the traditional while still using a neutral material that would not affect the whisky’s character. But this did present some challenges. “With opaque ceramic, you don’t have the luxury of refraction [like glass],” says Callum. “The surface is all you have to play with. To create an impact, all elements of the design must be considered and brought to life on the exterior.”

To that effect, Callum employed “organic lines and contrasting textures” separated by a diagonal slice. And that cork-popping sound was just as intentional as the deconstructed orange tartan that seals the bottle. “The experience is a sum of tiny intricacies of design and engineering that have been carefully crafted and are all incredibly important.”

The unique cork popping sound is just as intentional as the deconstructed orange tartan that seals the bottle.  Leo Bieber, courtesy of Callum.

Of course, the quality of the whisky inside the bottle should match the level of attention paid to the exterior, which Thomson says is the case. The unpeated whisky was distilled in Annandale’s two small copper pot stills and matured in ex-bourbon casks. There is no age statement, but Thomson says that’s a detail often given too much importance. “There is an ongoing debate that ‘the older the whisky the better,’ but that’s not the case,” Thomson says. “It’s all about the whisky reaching sensory maturity and offering the best possible quality rather than hitting a certain age… Cask 529 has reached its peak . . . that’s why it’s been selected; it’s ready to be enjoyed now.” Immediacy is also a factor when it comes to acquisition, as only 230 bottles will be released, each priced at £350 (about $438).