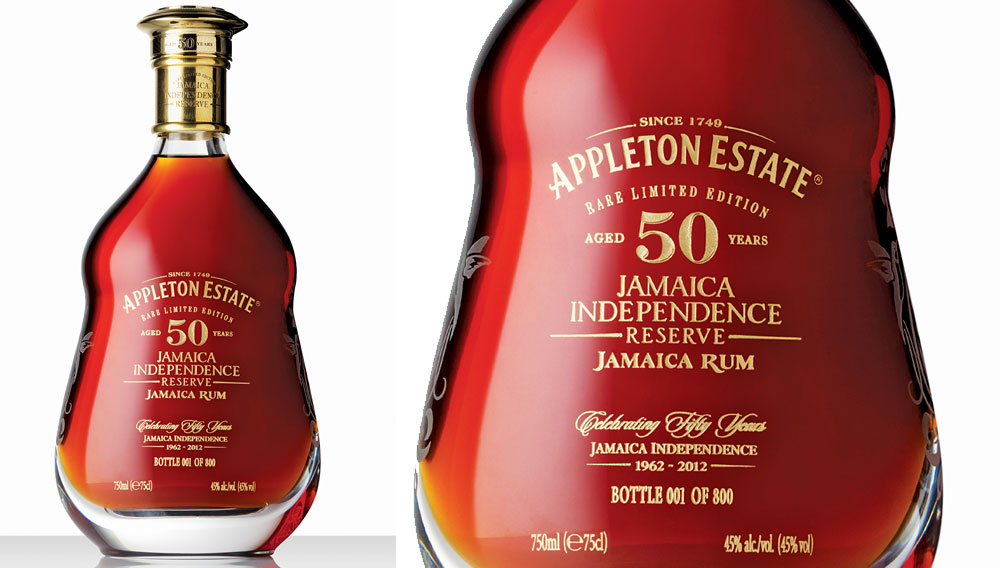 In 1962, Owen Tulloch, then master blender of Appleton Estate, one of Jamaica’s most prominent distillers, added a few barrels of rare column-and-pot-distilled rums to the already exceptional rum-filled, ex-bourbon casks he had begun aging seven years earlier. These additions brought to 24 the total number of barrels that Tulloch designated for possible use a half-century later, when the country would celebrate the 50th anniversary of its independence from the United Kingdom.

Tulloch’s protégé and successor as master blender, Joy Spence, inherited the task of guarding the cache of rare rums—a responsibility she took seriously, going so far as to chain the casks to the warehouse floor. On June 8, 2011, Spence at last proclaimed the rums ready and began the blending process, during which the rums’ flavors were married to produce a seamless spirit that exhibits all the smoothness one would expect of its considerable age. The rum was then double-chill-filtered and bottled at 90 proof to ensure its complexity.

Although the limited-edition Appleton Estate 50 Year Old Jamaica Independence Reserve contains rum older than 50 years, the age designated on the bottle was determined, in accordance with Jamaican law, by the youngest rum in the blend. Indeed, this is unquestionably the world’s oldest barrel-aged rum—an appropriate achievement for Appleton Estate, which, founded in 1749, is the oldest rum distillery in Jamaica. Caribbean rums are seldom aged to this extreme, because the tropical climate accelerates the rate of evaporation to such a degree that, under normal circumstances, a barrel would typically be left empty of spirit after 50 years. Yet Appleton Estate overcame this environmental limitation by imposing a modified solera regimen. Every three years, the rums were decanted, reanalyzed, vatted together, and returned to the barrels, which were refilled to the brim. Because of evaporation, the volume decreased with each of these procedures, resulting in ever fewer barrels. By the time Spence was satisfied that the rum had attained perfection, a half-century of aging had reduced the original two dozen barrels to a baker’s dozen: Only thirteen casks remained—just enough to fill 800 Glencairn crystal decanters, 70 of which have been made available in the United States at a price of $5,000 each.

Appleton is typically a golden rum, but so many years in ex-bourbon barrels have imbued this example with a dark mahogany hue. The distillery’s signature orange-peel flavor is present, however, as are gentle floral notes. The inclusion of a substantial portion of pot-distilled spirits lends to the tasting experience an almost overwhelming array of flavors—chocolate, cherry, cinnamon, and maple—that make this rum, like Jamaica’s independence, well worth the wait.