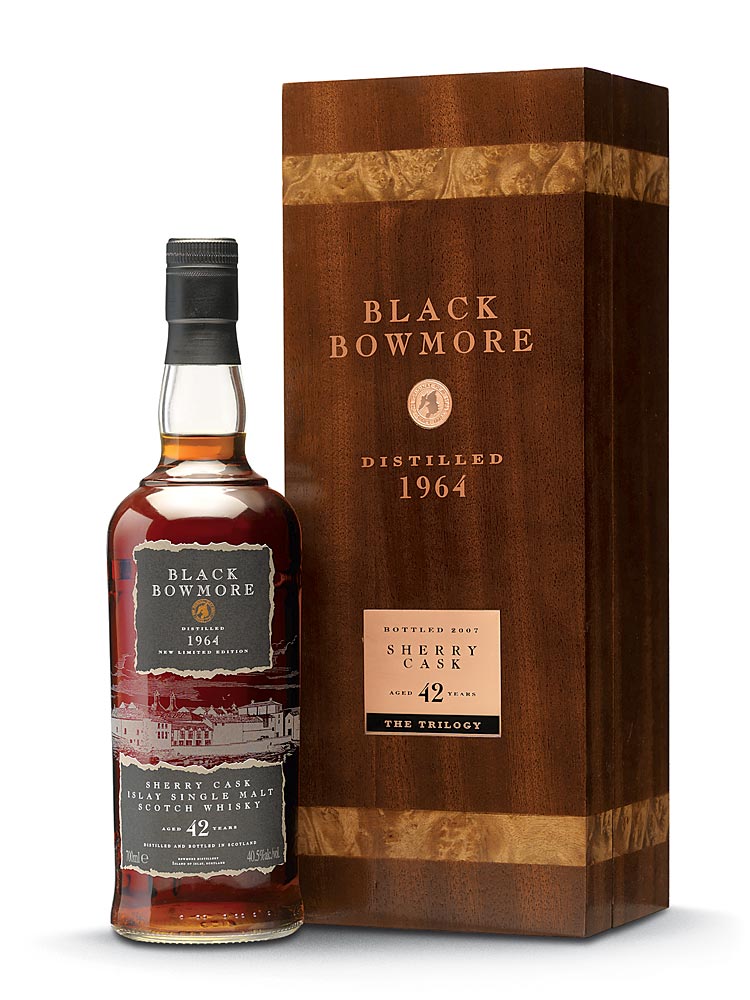 In the game of high-priced whiskies, as in that of high-stakes poker, four of a kind always beats three. Bowmore trumps an earlier winning hand with this summer’s introduction of the long-anticipated Black Bowmore 42-year-old single-malt Scotch whisky, from a rare batch that also yielded the trio that sold for $18,000 at the first spirits auction held by Christie’s in the United States last December. The Christie’s lot offered three examples of this legendary batch, distilled in 1964, each bottled at a different stage of maturity: 29, 30, and 31 years. The recently released 42-year-old Black Bowmore is the last and, one might argue, the best of the line.

“With the first three bottlings, you could see really exotic flavors beginning to develop,” says Iain McCallum, head blender for Morrison Bowmore Distillers, who has had the enviable experience of tasting all four releases. “They were incredibly complex, incredibly balanced, had great fruitiness, and they had fantastic texture. They were like a diamond. Imagine polishing that diamond to the ultimate, and that’s what you get with the 42-year-old. There are mangoes, papayas, lychees—a mouthful of exotic fruits mixed with a dark, syrupy sweetness.”

Black Bowmore’s distinct flavor profile is the result of serendipitous timing. In 1964 the Islay distillery had newly converted from coal-fired pot stills to stills run on steam, enabling the master distiller to control temperature far more precisely. This, says McCallum, helped produce smoother, more consistent spirits. Another factor in the creation of these special whiskies was the convenient arrival—just as the first batch of distillate dripped from the new stills—of 17 sherry butt casks from Williams & Humbert. Unlike the more typical bourbon barrels, which impart a golden hue to their contents, these oak Oloroso casks retained a tremendous amount of sherry-walnut flavor and color, resulting in a much darker, reddish-amber whisky. As the casks aged below sea level in Bowmore’s coastal cellar, known as the No. 1 Vaults, it became apparent that the whisky they contained was evolving into something quite special. The floral notes were deeper, the flavors more profound, and the color darker than usual, prompting the distillers to set the casks aside to allow the whisky to develop in a fashion similar to a fine vintage port.

The first release of the spirit, in 1993, consisted of 2,000 bottles, culled from four casks, that sold for $130 each at the time. A year later, at 30 years old, another 2,000 bottles of the whisky were released for about $190 each. And in 1995 the third offering—1,812 bottles priced at about $250 each—was made available. Though the whiskies spent an average of three decades in oak, they had none of the dominating wood flavors that so often are present in extra-aged single malts—an indication that the casks had been made from seasoned, old-growth wood. “As the whiskies were getting older, the smokiness was dropping away; they were becoming more polished and had more finesse,” says McCallum. “With the remaining five casks, we thought: Let’s keep them a while longer to see how fantastic they could really become.”

The whisky held up for another decade, but by 2006 time was catching up. The world’s last five casks of Black Bowmore had begun to succumb to the phenomenon known as “angels’ share,” evaporating at an average rate of 2 percent a year. The whisky’s alcoholic strength also was diminishing, which became a concern as it neared the 80-proof mark: Any lower and, by law, the spirit could no longer be sold as Scotch whisky.

At 42 years and 81 proof, the last five casks of the original 1964 distillation filled just 827 bottles, 80 of which are now in the United States. Priced at $4,500 apiece, each bottle is numbered and set in a mahogany chest bearing a copper plaque. This may well be the last opportunity to own one of Scotland’s most legendary single malts—at least on the open market.