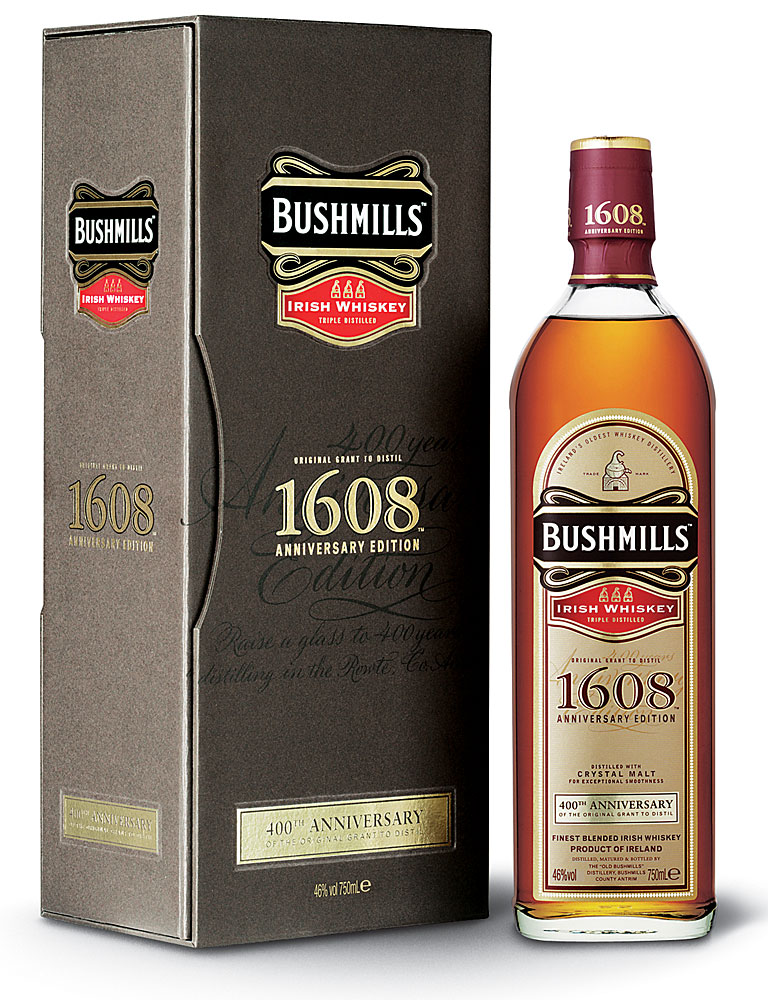 Colum Egan, master distiller for Bushmills Irish Whiskey, remembers the instant he became inextricably linked to his employer’s past. “My key moment was when I tasted an 1882 Bushmills bought at auction,” explains Egan while leading a tour of the company’s centuries-old distillery in Bushmills, Northern Ireland. “We drew the sample with a syringe. You could tell by the look of the stopper it was old, but it reminded me immediately of our 10-year-old single malt.”

Preserving this continuity of taste was high among Egan’s priorities as he developed the new Bushmills 1608, a blended whiskey that commemorates King James I’s granting of a license to distill in the Bushmills region 400 years ago. Since 1784, the Old Bushmills Distillery has occupied the same site in its namesake village in County Antrim, some 60 miles north of Belfast and just 14 miles—across the Atlantic Ocean—from Scotland. The property’s Distillery Burn sluices into the works after passing over basalt, the same type of rock that, just north of town, forms the interlocking volcanic columns at Giant’s Causeway. Legend holds that an Irish giant built the landmark so that he could attack a similarly sized neighbor in Scotland, which, on clear days, is visible across the Atlantic. The myth could serve as a metaphor for the present-day rivalry between Egan’s thrice-distilled whiskeys and the once-distilled malts produced on the other side of the water.

Thanks to its contact with basalt, Bushmills’ water adds a mineral component to the distillery’s malts. The 1608 is no exception, but the whiskey provided Egan with an opportunity to be inventive while still delivering a spirit immediately identifiable as Bushmills. “Our five core whiskeys [Original, Black Bush, and 10-, 16-, and 21-year-old malts] need to stay the same,” he says. “But Bushmills has long been known as an innovator. Very few whiskeys are made using crystal malt today, so I felt it would be appropriate for the occasion.”

In the crystal-malt process, malted barleycorns simmer in a kiln and then are heated rapidly, causing the grains to caramelize partially, which enhances the natural sweetness of the whiskey. Egan blended the crystal malt, at 12 years old, with a 5-year-old grain whiskey from County Cork’s Old Middleton Distillery. “Bushmills makes only malt whiskey, and I felt that adding a small amount of new-made grain whiskey to the crystal malt gave it a nice balance and soft sweetness,” he says.

At the gathering table in Bushmills’ tasting room, Egan adds a bit of water to two glasses containing the 1608, releasing a soft scent of raisins and honey. The taste is not so subtle. “It’s 92 proof, so a little stronger than our other whiskeys,” says Egan. “To me, it’s like putting a vanilla stick on the tip of your tongue.”

The finish—a lingering intimation of chocolate and toffee—owes to the crystal malt. “You can taste it through the whole process,” says Egan, who ends his deliberations with a warning. “We wanted to make this a very special offering, so the 1608 will be available on the open market [for $75] only during the anniversary year. After that, you will be able to buy it only here at the distillery.”