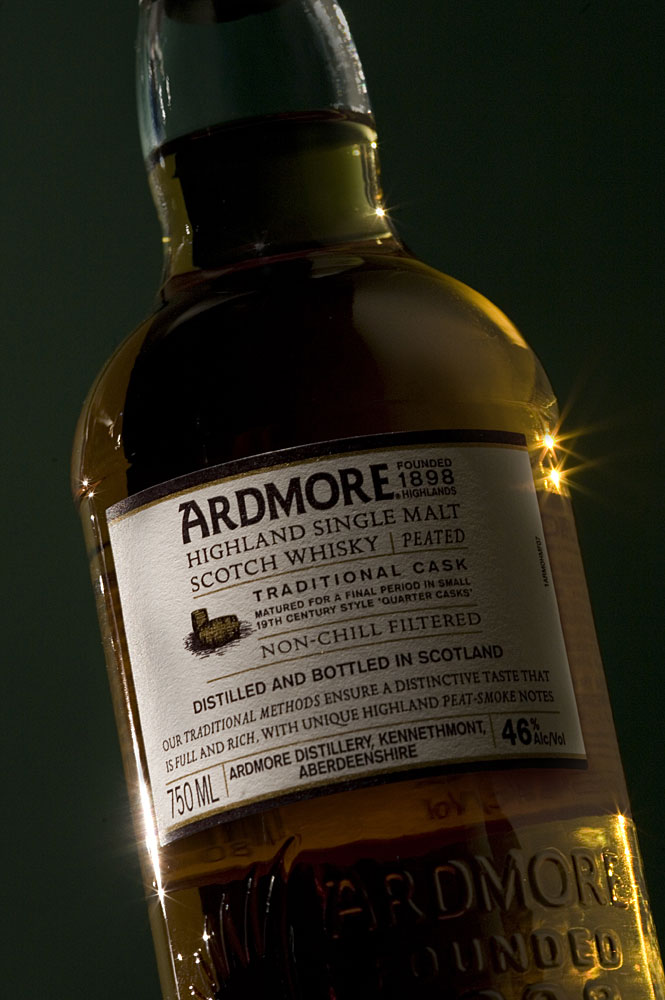 Ardmore, the single malt that lends Teacher’s Highland Cream blended Scotch its buttery and slightly smoky qualities, has gone solo again, this time as Ardmore Traditional Cask. Ten years ago, to celebrate the brand’s centenary, Ardmore presented 200 bottles of a 21-year-old version of its single malt to various VIPs. Also to mark the occasion, it sold 100 cases of a 12-year-old at its distillery, in the Speyside town of Aberdeenshire. The new release, which arrived in the United States in March, bears more resemblance to those whiskies than to the single malt that goes into Teacher’s.

The Teacher’s-bound Ardmore is aged for six years in oak puncheons. (A puncheon is substantially larger than a barrel, and thus, according to distillers, the whisky’s flavor is affected less by the container’s wood or by its original contents.) The whisky then is blended with other single malts and a small amount of grain whisky.

The Ardmore Traditional Cask, with its sweet, earthy, and gently smoky flavor, is closest in taste to the meaty 12-year-old released in 1998. The spirit’s distinguishing characteristics derive from the barrels in which it is aged. Those barrels, known as quarter casks, are roughly one-fourth the size of a standard, 26-gallon wooden cask. The smaller size allows for more contact between the whisky and the wood, which intensifies the flavor more quickly. (Distilleries originally used the lighter, less-bulky quarter casks in the 19th century to transport whisky from the Highlands by horse, attaching one barrel to either side of the animal.)

Ardmore master blender Robert Hicks discovered the benefit of aging whisky in quarter casks while he was the master blender for Laphroaig. In 2005, he introduced the highly popular Laphroaig Quarter Cask bottling.

The whisky reserved for Traditional Cask is aged from five to 17 years in bourbon barrels and then transferred to quarter casks made from Jim Beam and Maker’s Mark bourbon barrels. The length of time that the whisky remains in the quarter casks varies from one cask to another. “Because Ardmore is a mix of different ages [five to 17 years], I said let’s not have an age statement, but a flavor package instead,” explains Hicks. “We’ll go for the taste, not the years. This is critical with traditional cask aging, because the whisky stays for an undetermined period of time in quarter casks until it’s ready. Seven months may not be enough. More than two years might be too much. But when it’s ready, you’ve only got two or three weeks to get it out of the quarter cask and into the bottle or it will be past its peak.”

The distillery plans to ship only 3,000 cases of Traditional Cask to the United States, and the whisky is priced at about $50 a bottle. Ardmore may release a limited bottling of Traditional Cask made from 21- to 30-year-old single malts later this year; however, the demand for Teacher’s leaves less than 10 percent of Ardmore’s stock available for single-malt bottling. “Hindsight is a great thing, and if I’d known how popular Ardmore would be [as a single malt], I would have been squirreling it away for years,” says Hicks.

The whisky supply is not the only concern for Hicks. “Because the whisky takes so much out of the wood, you can use a quarter cask only once,” he says. “They’re not good for anything after that. So what do I do with all those used quarter casks, make flower planters? I wish someone would tell me, because I really don’t know.”