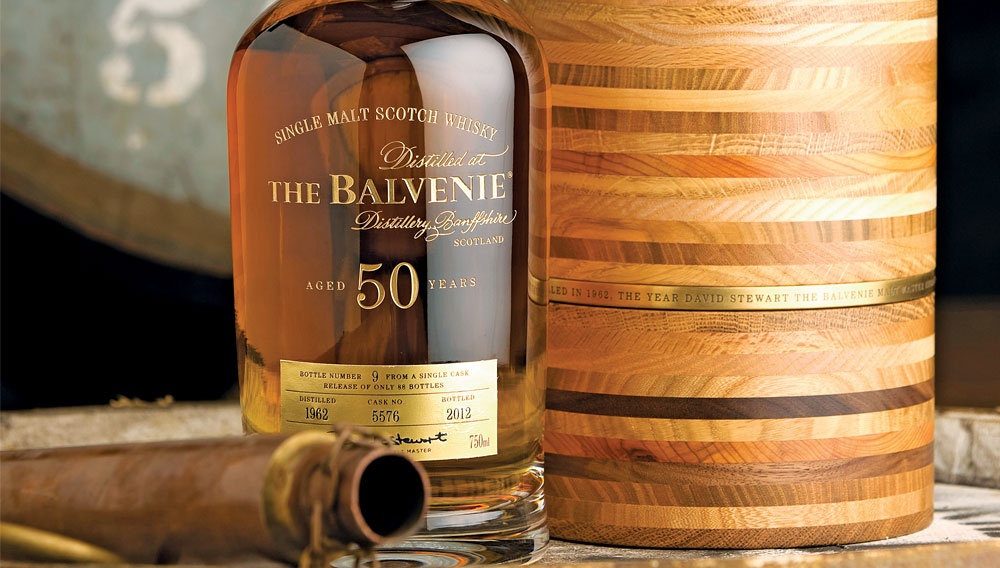 David Stewart, The Balvenie Distillery’s malt master, picks up a gold-etched bottle and gently decants a dram of single-malt whisky into a Glencairn tasting glass. He holds it to the light, gazing at it as if it were an old friend. And indeed it is. “This whisky and I,” he says, “have shared the last five decades together.”

In June 1962, The Balvenie’s workers put a fresh distillate into cask No. 5576—a lightly charred European oak sherry hogshead (an unusual variety of barrel for aging whisky, as most hogsheads are made of American oak). That same year, on September 3, the former malt master, Ham­ish Robertson, hired a young whisky-stocks clerk named David Stewart. Robertson saw something promising in his recruit and began teaching him the fine art of whisky blending. Twelve years later, Stewart succeeded his mentor as The Balvenie’s malt master, and today he is the longest-running malt master in the history of Scotch whisky. Moreover, he was the first to finish single malts in barrels previously used for other spirits, beginning in the 1980s with The Balvenie Classic. That led to The Balvenie 12 Year Old DoubleWood in 1993, which is aged in bourbon barrels and finished in sherry casks. Before that time, single malts had primarily been aged in either ex-bourbon barrels or once-used sherry casks, but rarely in both. Stewart’s innovative concept not only gave rise to an entire family of The Balvenie whiskies aged in multiple barrels, but also established a trend that has been enthusiastically embraced throughout the industry.

Last September, as Stewart celebrated his 50th anniversary (and cask 5576 looked back on its own), he announced that the cask he had overseen throughout his entire career was finally ready for bottling.Although both had matured gracefully, evaporation had taken its toll on cask 5576, leaving only enough to fill 88 bottles, which are priced at $30,000 apiece. Each handblown vessel bears a commemorative brass plaque and is housed in a handsome canister, which was fashioned by Sam Chinnery using seven varieties of Scottish wood, including Banffshire elm from The Balvenie Distillery. The whisky is bottled at a cask strength of 88.2 proof.

“We don’t quite know the history of the barrel,” Stewart says. “It may have had sherry in it, but the whisky itself is not sherried, nor is it overly oaky, although there is some oak there. But it has a nice floral aroma, and when you nose it, you get an orangey-lemon note.”

Only 10 bottles of The Balvenie Fifty have been allocated to the United States, and at least one of them is already empty: The Cosmopolitan of Las Vegas offered $3,400 pours, and they sold out within an hour; the hotel recently secured a second bottle, and one may order a 2-ounce pour once again. A third bottle went to Mastro’s Steakhouse in Beverly Hills, where a 2-ounce pour in a Glencairn tasting glass is $3,700.

The experience of imbibing this rarity may be all too brief, but each sip is memorable. The spirit is a burnished gold, delicately translucent in the glass. Its distinctive aroma is touched with heather and violets, the flavor faintly caressed by butterscotch, black cherries, and vanilla. This combination of complexity and subtlety makes a timely tribute to the distillery and the man who watched over the whisky all those years.