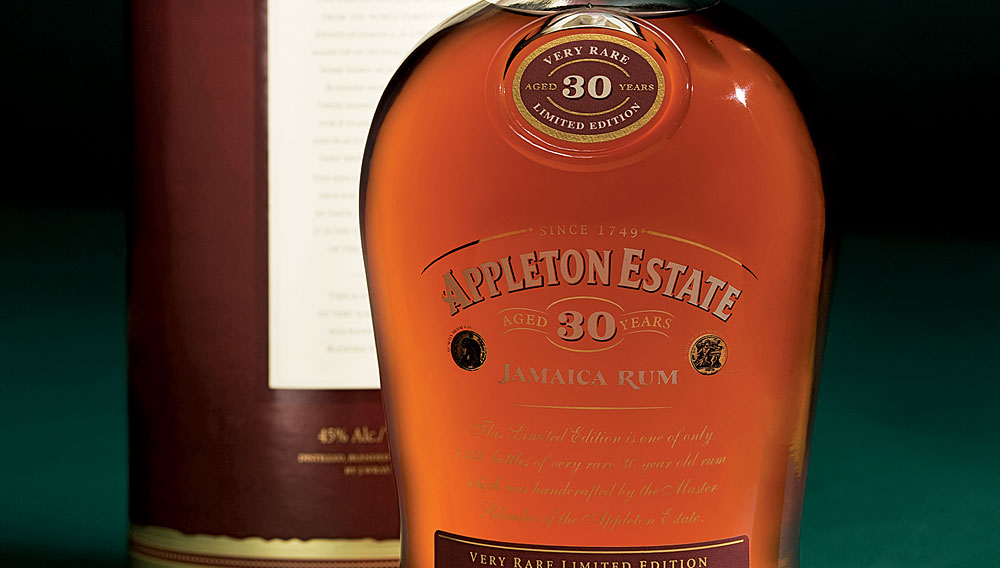 As it illuminates a snifter of Appleton Estate 30-Year-Old Jamaica Rum, the sunlight of the broad Jamaican sky reveals the faintest tinge of jade at the golden-hued spirit’s edges. “We call this the ‘green ring of aging,’” says Joy Spence, Appleton’s master blender. “It is an indication that the rum has been maturing for a very long time.”

The 30-Year-Old is the oldest rum that Appleton Estate has released in its 260-year history. Because the evaporation rate is high in the Caribbean—about 6 percent a year compared with the 2 percent rate in cooler climates like those of France and Scotland—few producers in the region age their distillates for very long, says Spence.

“This is why we refill most of our barrels every few years,” she says. “We select a batch of rums of the same age and marque [i.e., a specific distillation]. Then each barrel is checked for organoleptic quality, and if they pass, their contents are emptied into a vat with similar rums, and the barrels are then refilled.”

Filling the 40-gallon barrels to the brim eliminates air, slowing the rate of evaporation and maintaining the distillate’s alcohol strength. These heavily charred whiskey barrels, which originate from the Jack Daniel’s distillery in Tennessee, lend the 30-Year-Old its hint of smokiness—a significant component of the spirit’s flavor profile. However, other, more subtle, factors also contribute to its personality.

In keeping with its estate designation, Appleton performs all aspects of rum-making—from growing the sugarcane and distilling the molasses to aging, blending, and bottling—in Jamaica’s Nassau Valley, where the firm’s 11,000-acre plantation has stood since 1749. There, a limestone plateau filters underground water, which surfaces to form a stream that meanders through the cane fields before running down a series of waterfalls into the Black River Gorge. This naturally purified water is mixed with the fermented molasses prior to distillation, during which Appleton employs both column and pot stills: The former provides the spirit with finesse and aroma, while the latter increases body and strengthens flavors.

What the stills give, however, the cellar takes away—at least in terms of quantity. Only eight brim-full barrels of the 30-?Year-Old’s original 10 remained at the end of the aging process—just enough to produce 1,440 bottles, 744 of which have been allocated to the United States at a price of $400 each with a numbered certificate of authenticity. Yet three decades in the cellar have also given something back to this limited edition: With time, all of the rum’s elements have come together seamlessly in the glass. The full-bodied spirit offers up a bouquet thick with the fragrance of baked pears, orange peel, ginger, and maple; these aromas repeat on the palate as flavors entwined with traces of smoky vanilla. A slightly herbaceous undercurrent of molasses lingers on an exceptionally dry finish.

Although Appleton’s oldest rum release is a first for its producer, rums as old as 50 years continue to age in the distillery’s warehouse—yet another reason to be optimistic about the delicious future of going green.