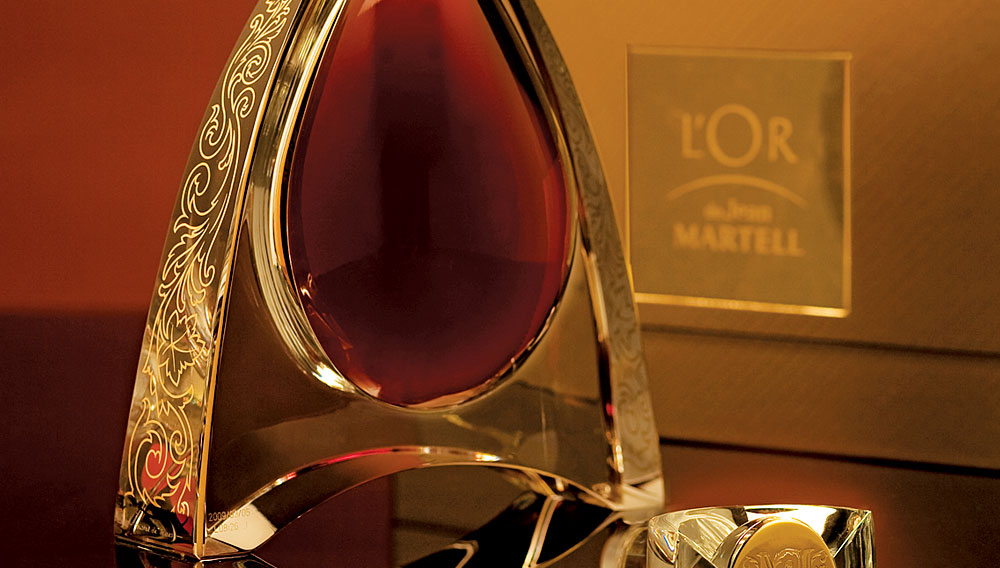 Although provenance is an important factor in determining the value of any commodity, including vintage wines and spirits, the precise origins of the Cognacs combined in the newly released $3,600 L’Or de Jean Martell remain something of a mystery. More than 400 eaux-de-vie, some dating back to the late 19th century, have united in this extraordinary blend; but unlike the 1992 release of L’Or de J&F Martell, which came predominantly from the Grande Champagne and Borderies appellations, this latest creation also includes distillates from grapes grown in Petite Champagne and Fins Bois. The age and proportion of each, of course, is known only to cellar master Benoit Fil and his staff—the master distiller and two professional tasters—who worked together over the course of two years developing the spirit.

“What we tried to do with the new L’Or de Jean Martell is respect the philosophy and the house style of Martell, which is based on the Borderies cru, so there is a significant percentage of it in the blend,” says Fil. “Eaux-de-vie grown in that area add richness, complexity, and balance to those made in Grande Champagne, which bring more body, length, and power.”

Comprising nearly 10,000 acres of vineyards, the Borderies appellation does without question produce some amazingly fine yet underappreciated Cognacs. Its microclimate is similar to that of its southerly neighbor, Grande Champagne; yet Borderies is the only cru in the Cognac region (there are six in all) with significant clay content in its soil, which Fil says accounts for the distinctive character of its eaux-de-vie: floral and expressive when young and, with age, showing nuances of candied fruit and spice.

Despite the fact that L’Or de Jean Martell contains eaux-de-vie from four crus, its profile primarily represents a dance between the flavors of Borderies and Grande Champagne. Which cru dominates remains a well-guarded company secret, perhaps in part because L’Or de Jean Martell—launched in April with only 120 bottles allocated to the U.S. market this year—is not a limited edition. Much like Rémy Martin’s Louis XIII, L’Or de Jean Martell will be re-created in coming years. What is known is that the youngest eaux-de-vie selected are 10 years old; however, the blend draws on some of the most prized stock in the company’s paradis cellar (which is more than a century old), including 1871 and 1933 Grande Champagnes, as well as a Borderies distilled in 1979. As to how much of these older eaux-de-vie actually made it into the final blend, Fil remains tight-lipped. “A true artist never reveals all of his secrets,” he says.

Still, the finished spirit—which is bottled in handblown Cristal de Sèvres decorated with gilded garlands—reveals a great deal. Intense and elegant, as well as fruity and floral, the aromas of L’Or de Jean Martell show spicy black cherry, fleshy plum, cassis, violet, caramelized orange rind, leather, wood, and brown spices. On the palate, this velvety, amber elixir introduces a piquant yet silky balance of candied orange, linden blossoms, caramel, cinnamon, clove, anise, and nuts. As the Cognac opens, nuances of fresh-cut herbs, dried fruit, ripe red fruit, and cocoa emerge. The palate finishes long with a lingering sweetness and an earthy rancio note that is typical not only of its terroir but also of the house that produces it.