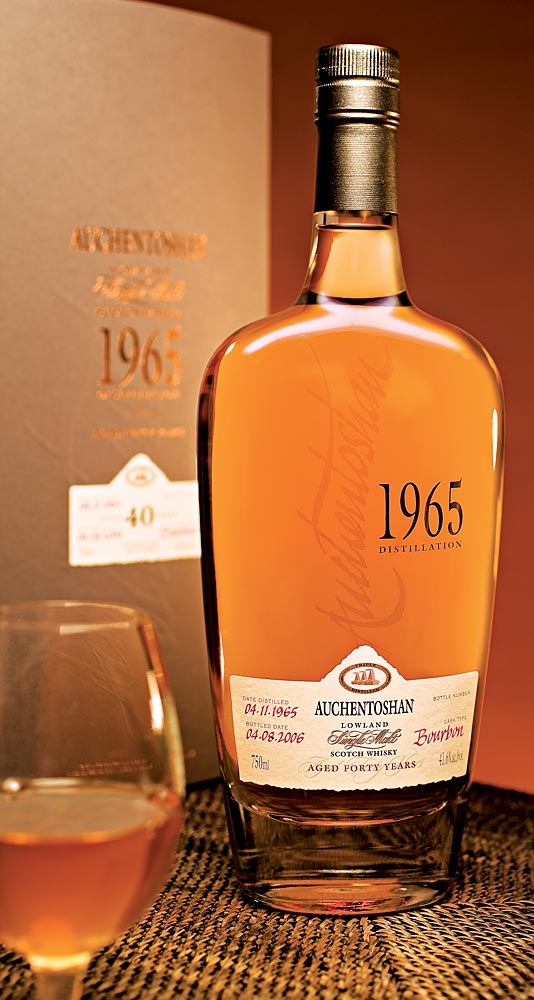 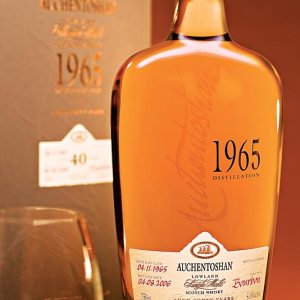 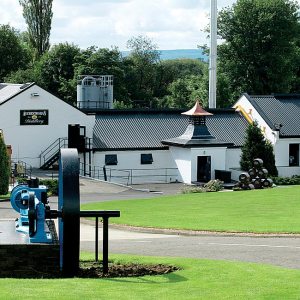 Breaking the seal on a bottle of rare, extra-aged, single-malt whisky often summons the ghost of years past. Indeed, much of our pleasure in owning such a spirit derives from the recollections it awakens of the happenings in the world and our own lives in the year that it was made. In 1965, when the latest limited edition of Auchentoshan—a 40-year-old single malt to be released this fall—first went into the barrel, Winston Churchill had recently passed away, Lyndon Baines Johnson had been sworn in for his own full term, and a youthful Bob Dylan was recording what would become one of the anthems of the emerging youth movement: “Like a Rolling Stone.”

But an interesting year does not a good whisky make. While vintage can make or break a wine, in the case of single malts it is merely an indication of age; the style, character, and quality of the spirits produced by Scotland’s 80 or so distilleries depend primarily on the grains used, the malting processes and distillation techniques, and the choice of barrels for cellaring. However, as with wines, the landscape also plays a critical role; Auchentoshan’s Lowland distillery, located just west of Glasgow, perfectly illustrates this.

“It’s a fantastic place to age whisky,” says Iain McCallum, distillery manager for Morrison Bowmore, which owns Auchentoshan as well as Bowmore, on Islay, and Glen Garioch, in the Highlands. “Here, we’re sheltered by the Old Kilpatrick Hills and the River Clyde, so that we receive a microclimate that stays temperate year-round, with not a lot of variation.”

One of only three full-time distilleries in the region, Auchentoshan (Gaelic for “corner of the field” and pronounced “och-en-tosh-en”) is considered the most classic of the Lowland malts in terms of its method of triple distillation. Its water source, however, is located in the Highlands: A stream from Loch Katrine channels through fields and forests until it reaches its final destination near the distillery. The whisky’s reputation rests in part on the absence of smoky flavors and aromas in its profile. Unlike the Hebrides, the Highlands, or Speyside, the Lowland region has very little peat, the dense layer of vegetative soil that gives most Scotch whiskies their smokelike character. Traditionally, Lowland whisky makers (until the 1980s, there were as many as 20) dried their malted grains by burning coal or other fuel sources instead of the flavor-heavy peat moss. Triple distillation (rather than double) also sets Auchentoshan apart—not only from other distilleries in the Lowlands, where the triple-distillation method was once commonplace, but also from every other whisky maker in Scotland.

Considering Auchentoshan’s lack of smoky flavors and the smoothness it acquires during triple distillation, one might wonder whether this whisky and Lowland malts in general have the structure and intensity necessary for extended aging. Happily, they do.

“The 1965, over the years, gradually gained wood flavors from the bourbon barrels,” explains McCallum. “But we decided to bottle after 40 years because we didn’t want the wood to start to dominate, like it does in an overaged Chardonnay.” McCallum was 30 years old in 2006, when he filled only 200 bottles with this whisky at a natural cask strength of 41.6 percent alcohol, just days short of the 41-year mark and barely above the 40-percent strength necessary to be called Scotch. “Now that it’s in glass,” he says, “it can last for ages, if it is kept at room temperature and out of sunlight.”

A dram of the straw-colored Auchentoshan 1965 ($1,500) displays aromas and flavors of grain, light honey, almond, and vanilla bean, while its long finish is laced with light notes of citrus. The whisky remains firm and well structured; though some flavors are beginning to mellow, it leaves a memorable impression—much like the year in which it was made.