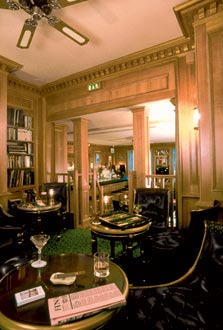 “James Bond stopped by the other day,” begins bartender Colin Field. “I asked him if I could please make him my vodkatini, which is neither shaken nor stirred.”

Bond acceded and, after taking a sip, uttered a one-word appraisal: “Lethal!”

“So then I hung a sign above the bar saying, ‘Martinis recommended by Mr. James Bond,’ ” Field adds with a laugh.

We can only guess which Bond stopped by, for Field is far too discreet to say. But it stands to reason a Bond would be here, as no bar resonates with more legend, adventure, and high spirits than the watering spot over which Field presides: the Hemingway Bar at the Ritz Paris. To be sure, much of the bar’s mystique is related to the famed hotel that is its home, a place so lavish it became a synonym for elegance and luxury. But where the Ritz is ritzy, the oak-paneled Hemingway Bar is clubby and cozy, the sort of place that its namesake might have frequented.

Indeed, America’s most celebrated writer did drink here, beginning on August 25, 1944. As the story goes, with the smoke of war still hanging in the air, Hemingway—then a war correspondent—arrived with a band of American soldiers to liberate the Ritz from its German occupants. That accomplished, they headed for the bar that would later bear Hemingway’s name, where he ordered a round of 51 dry martinis.

What Hemingway was to literature, Field is to mixology. The affable Briton, who studied history at England’s Tresham College in the early 1980s, has been called the world’s greatest bartender and, according to the French newspaper Le Figaro, he is one of the 20 most creative people in Paris.

Recently, his artistry and observations of life from behind the bar were collected and published as The Cocktails of the Ritz Paris (Simon & Schuster, 2003). “There is no one way to make a cocktail,” says Field, who is in his early 40s. “You have to ask yourself, ‘For whom am I making this drink?’ ” For Bond, he recalls, he had poured vodka chilled at precisely minus 1 degree Fahrenheit into a glass before spraying a thin film of Noilly Prat over its surface. “The secret,” he explains, “lies in the temperature.”

An avid collector of books on bartending and spirits (the oldest in his collection dates to 1850 and chronicles the favorite drinks of the Oxford dons), Field has little patience for the apocrypha surrounding the origins of certain cocktails. In fact, he has been banned from one Paris bar for refuting its claim as the birthplace of the Bloody Mary. Field prefers the story that the first Bloody Mary was created by his predecessor at the Ritz, Bertin Azimont, at the behest of Hemingway, who wanted a cocktail that his wife—whom he often called Bloody Mary—could not smell on his breath.

Field can speak with greater authority on such cocktails as the Ritz Side Car, the Bilbo Baggins, the Fratini, and the Dakota, to mention just a few of the concoctions he himself has created at the Hemingway Bar. “The Ritz Side Car is the most expensive cocktail in the world,” he claims. “It costs 400 euros because it’s made with pre-phylloxera cognac. It landed me in the Guinness Book of World Records. A bartender can never get rich, but he can become famous.”