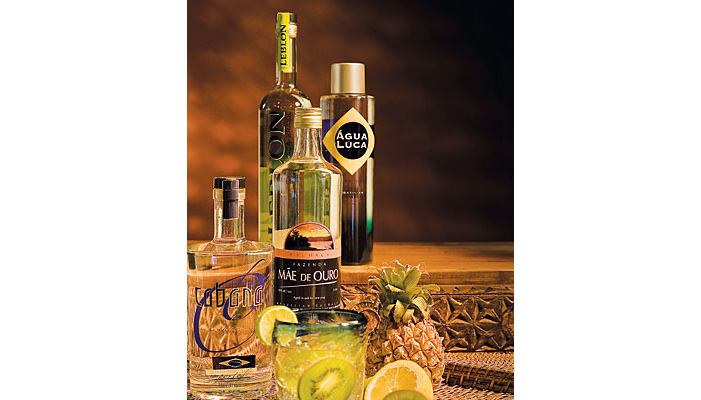 Brazil’s national spirit, the sugarcane-derived cachaça, is the third-most-imbibed distillate in the world (behind vodka and soju). Until recently, however, less than 1 percent of the total production of cachaça entered the United States, and the low-grade varieties that reached the country served almost exclusively as ingredients for caipirinhas and similar cocktails. But with the recent introduction of premium brands such as Sagatiba, Rochinha, Água Luca, and Leblon, cachaça is poised to carve out a niche with North American connoisseurs.

“Cachaça is hot right now,” says Joseph Bowman, a partner in Excelsior Imports, which introduced Água Luca to the U.S. market in 2005. “It’s where the 100 percent blue agave tequilas were 10 years ago.”

Like tequila, the term cachaça (pronounced ka-SHA-sa) refers to both a spirit’s provenance and production methods. The name originates from cagaça, a crude sugarcane wine made by plantation slaves in colonial Brazil. After the Portuguese introduced distilling techniques to Brazil in the mid-1500s, cachaça, which also is known as Brazilian rum, supplanted the wine in the country’s culture.

Leblon, Cabana, and other recent introductions to the U.S. market prove that cachaça is not just for caipirinhas. Photograph by Cordero Studios/ www.corderostudios.com (Click image to enlarge)

Unlike most rums, which are molasses-based, cachaça is produced from fermented sugarcane juice. The spirit is commonly associated with the caipirinha, Brazil’s national cocktail, which consists of cachaça muddled with lime and sugar. But Adam Seger is among the mixologists who favor cachaça—for its piquant backbone and a sugarcane essence that complements herbs, spices, and fresh fruit—over vodka and standard white rum in a variety of drinks. “A great cachaça is smooth enough to sip,” says Seger, who worked with chefs Thomas Keller and Charlie Trotter before assuming his current role as head bartender at Chicago’s Nacional 27, where he makes such food-friendly cocktails as a caipirinha with muddled grapes, limes, and white-wine reduction. “But cachaça also has more edge than squeaky-clean white rum.”

Cachaça’s characteristics—and the fermentation, distillation, filtration, and aging methods used to produce it—vary widely among Brazil’s approximately 20,000 distilleries. All good cachaça, however, begins with high-quality sugarcane, much of which comes from agricultural regions in the states of Minas Gerais and São Paulo. “Minas Gerais is a bit like California’s San Joaquin Valley, with soil so rich and dark it can grow anything,” says Steve Luttman, a former LVMH marketing executive who two years ago began producing Leblon ($30, 750 ml), a smooth white cachaça made from Minas Gerais cane. “Cane grown here tends to be fruitier and not as acidic.

“We are very meticulous about the harvest,” Luttman continues. “The farmers cut the middle stock by hand and mill it within 24 hours for the freshest extract.” The juice is then fermented in a closed environment using a yeast that promotes fruit-forward qualities. After distillation in copper alembic pots, the liquid is shipped in bulk to the Cognac region of France, where it is blended, aged for as many as three months in vintage Cognac casks, triple-filtered, and bottled for distribution in North America. (Like many of the new cachaças coming to the States, the spirit is not yet available in Brazil.)

Imports of cachaça into the United States grew by 20 percent in 2005. Still, North America lags behind Europe, where, during the last decade, Brazilian rum has become wildly popular. (Cachaça-based drinks are second only to beer in bars in Germany.) Importers are hoping for a similar, albeit more broad-reaching, boom in the United States. “With the emergence of cocktail-friendly brands, it’s only a matter of time before the consumer wants to dig deeper into the cachaça story,” says Olie Berlic, CEO of Excalibur Enterprises, which since 2004 has imported GRM Small-Batch Artesian Cachaça and other single-estate brands to North America.

Aged two years in three types of tropical wood, GRM ($70, 750 ml) is the product of a small farm in Minas Gerais. The rum has spicy, tequila-like notes laced with cloves, cinnamon, creamy caramel, and a bite of pepper. Another Excalibur import, Rochinha, is aged in Scotch whisky casks. The Rochinha Single Barrel 5 Year ($40, 750 ml) exhibits a soft yet masculine heat that shows best on the rocks before a meal, while the Single Barrel 12 Year ($80) is best neat after a meal and exudes oaky characteristics with toffee, caramel, and hints of smoke.

Introduced to the United States this spring, Sagatiba Pura ($30, 750 ml) is distilled as many as five times and reveals fresh cane and a clean, fruity essence on a warm finish. Cabana Cachaça ($35, 750 ml) is double-distilled in São Paulo and offers fruit, floral, and vanilla aromas and a smooth, peppery finish. Água Luca ($30, 750 ml), also from the São Paulo region, is a silky vegetal- and honeysuckle-flavored cachaça with a spicy finish.

Elusive but worth the search is Fazenda Mãe de Ouro ($30, 1 L). Only 2,500 cases of the small-batch, triple-filtered cachaça are produced from a single farm in Minas Gerais each year. Aged for at least one year in Scotch whisky barrels, the spirit features earthy aromas that preface light vegetal and peppery flavors reminiscent of a young tequila.