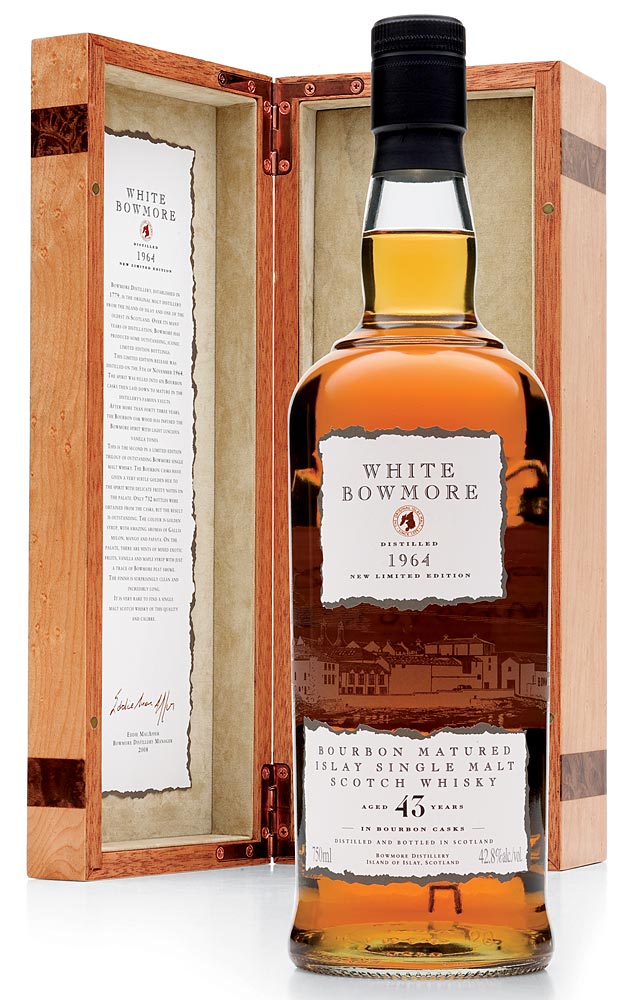 The return of the long-lost sibling is a dramatic device thoroughly exhausted by novelists from Dickens to Dumas; yet this well-worn formula provides a plot twist in the ongoing story of Black Bowmore that will excite the palates of discriminating whisky drinkers around the world. Four expressions of this rare, unusually dense and dark whisky have been gradually released since 1993—at 29, 30, 31, and 42 years. When the last of these expressions came onto the market earlier this year (see Robb Report, “Back in Black,” August 2008), aficionados assumed that the decades-old saga was finished. But only a few months after the final, much-touted Black Bowmore’s release, the distillery unveiled its twin brother, White Bowmore, at a private tasting in New York.

With its pale straw color, White Bowmore appears as different from the Black Bowmore as does day from night, despite the fact that both of the spirits originated from the same batch produced at the Bowmore distillery on November 5, 1964. Following a typical production run that day, the nearly clear distillate was poured into oloroso sherry casks that imbued the Black Bowmore with its walnut color and signature fruitcake, chocolate, and coffee flavors. But not all of the spirit went into sherry wood: Six American-oak bourbon barrels were also filled.

“We’ve always had a variety of barrels on hand—used casks that once held sherry or bourbon, but sometimes wine and port,” explains distillery manager Eddie MacAffer, who has worked for Morrison Bowmore since 1967. “It’s common practice to pour a single batch of distillate into several types of barrels; they each impart a different flavor.”

MacAffer doubts whether, on that particular day in 1964, anyone had specific plans to age the whisky for several decades; more likely, the distillers intended to prepare it for use in the Bowmore blend or for sale to Johnnie Walker. Yet as the whisky mellowed and drew complexity from the wood, the distillers recognized that this single malt had the potential to evolve into something quite special; and so the barrels were allowed to continue aging until the first of them was bottled, in 1993, as 29-year-old Black Bowmore. With the percentage of alcohol beginning to dip into the low 40s, the contents of the last five sherry casks were bottled in 2006 at the age of 42 years. The half-dozen bourbon casks remained untouched, however, until earlier this year, when the distillers determined that their time had come.

“We bottled the White Bowmore at 42.8 percent alcohol,” says Iain McCallum, the senior blender for Morrison Bowmore. “My guess is, the barrels lost 65 to 75 percent of their volume to evaporation over the 43 years.” That process left sufficient cask-strength whisky to fill a modest 732 bottles, only 40 of which have been allocated to the U.S. market, where their release price will be $6,000 each.

Separated at birth, as it were, the two whiskies share a core of luscious tropical-fruit flavors, though the 43-year-old White Bowmore emphasizes softer notes. On the nose, the whisky exhibits candied-fruit and tutti-frutti aromas, followed by hints of the rancio that one detects in older Cognacs. The palate is incredibly smooth and elegant, exhibiting flavors of crème brûlée and bourbon toast, with just a whisper of peat on the finish. “It’s typical of very old Islay single malts for the peatiness and phenolics to fall off and mostly disappear,” McCallum explains. “In young Islays, you get the smoke at the front of the palate. But with the White Bowmore it’s mostly in the aftertaste.”

Interestingly, this tale of two Bowmores does not end with the release of the White. According to McCallum, one final chapter remains: Another whisky, Gold Bowmore, has yet to be unveiled. But the blender refuses to disclose what kind of barrels house the Gold or how many bottles may be offered when it is finally released in 2009, 45 years after it was put into cask.