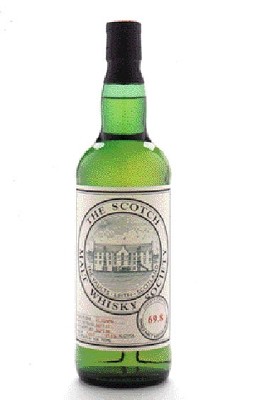 It was without a doubt one of the most unusual and interesting whiskies I had ever sipped. Although it was apparently a Macallan, the famous name appeared nowhere on the label, and it tasted like no Macallan I had ever encountered before.

The bottle had come from the Scotch Malt Whisky Society (SMWS), an organization made up of the world’s most passionate whisky connoisseurs. As a member, I had purchased a few samples of the society’s most interesting recent offerings, and the 24.61—that was the only identifier on the label—was a stellar selection.

It’s a taste I would never have known without my membership, because aside from the SMWS and a handful of distilleries, single-cask bottlings are primarily available only from independent bottlers. I discovered the organization during a visit to the Vaults, its converted 17th-century warehouse headquarters in Leith, just outside Edinburgh, where I met the society’s founder, Pip Hills. In the 1970s, while visiting friends in the Highlands, Hills sampled the delights of whisky taken straight from a cask, inspiring him and a group of fellow whisky enthusiasts to buy their own barrel. Word quickly spread about this unusual purchase, and soon they were planning a second one. It was from these modest beginnings that the SMWS eventually emerged as an organization that today includes 25,000 members around the world.

The SMWS buys the best, most unique individual casks of whisky it finds, bottles them under its own label—unfiltered, unblended, and undiluted—and sells them to its members. This was a radical concept when Hills and his friends began their plan. Distillery single malts were extremely rare, and single-cask single malts were unheard of.

Today single malts are widely available, but single-cask single malts, especially the society’s, are rare and far superior to the typical single malt. They offer an intensity and variety of flavor that you don’t find in the proprietary malts. “Over time, the tasting committee has built its own taste profile of a particular distillery,” says Richard Gordon, SMWS’s managing director and head of the tasting committee. “When we taste a new potential offering we know where it fits within that profile, whether it’s a good, an average, or a poor example—or if it’s completely off beam for that distillery. If the sample is both good and off beam, we go for it.”

My Macallan was a perfect example of this. It had none of the hallmark honeyed, sherried creaminess of the distillery bottling, tasting instead quite similar to a heathery, peaty Highland. This was not surprising, given that it originally came from an old bourbon cask—unusual for a Macallan—and was finished off (by the SMWS) for two years in a vintage Bowmore cask. The extra maturation proved to be a stroke of genius, introducing to the flavor briny hints of that Islay favorite.

The U.S. chapter of the SMWS offers about 20 whiskies at any one time, ranging in price from $85 to $125 per 750-ml bottle. The organi-zation requires a $149 initial mem-bership fee, for which you receive a bottle of whisky of the society’s choosing and a periodic newsletter with its colorful, if not entirely helpful, descriptions of the whiskies, and of course the exclusive opportunity to purchase them. The group sponsors the annual Single Malt and Scotch Whisky Extravaganza at various locations around the country and will organize tastings for private or corporate groups. In addition to the Leith headquarters, SMWS Members’ Rooms are also located in London and Zurich, and future facilities are planned for Tokyo, Paris, and New York.

If you hanker for variety or want to share the whisky epiphany Pip Hills experienced in the Scottish Highlands 25 years ago, sign yourself up for one of the SMWS’s many remarkable offerings. You’ll agree: Membership has its privileges.

Cask No. 69.8, 22 years old at bottling, is described thus: “…pale gold in color, clearly from a hogshead, and has a sweet, rich, creamy nose, with mead-like top notes. After a while in the glass, it acquires a light toffee note, reminiscent of Berwick cockles, and when water is added, it changes again, becoming fresh and somewhat spicy, like cardamom seeds. The flavour starts full and sweet; then becomes liquorice-like with an earthy, leathery element and a slightly dry finish. There is a trace of bitter cooking chocolate in the aftertaste. Unusual and stimulating.”