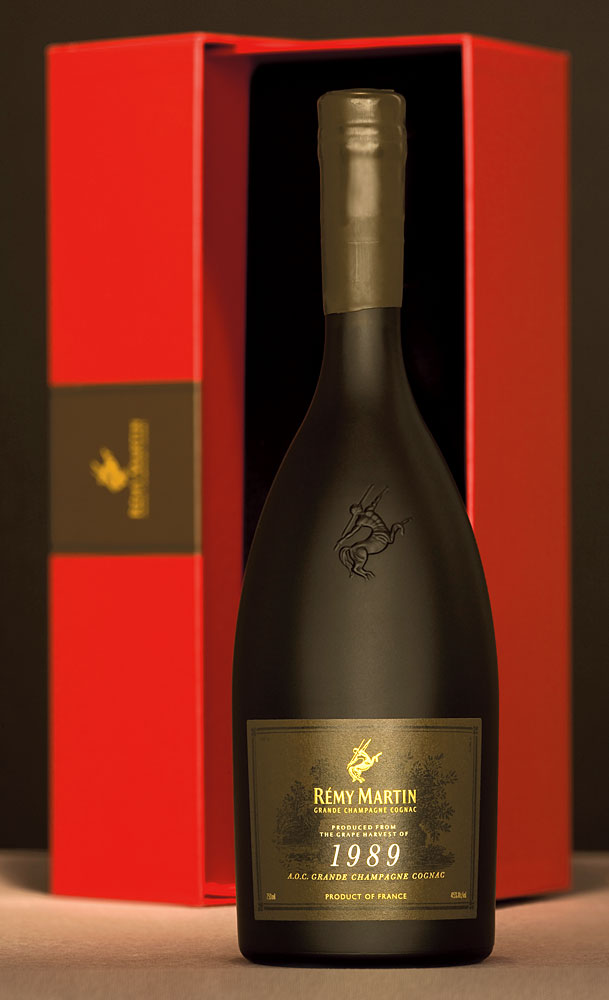 In the worlds of cars, cigars, and wine, the word vintage is often bandied about. But it is rarely applied to Cognac, as this double-distilled brandy is usually a carefully constructed blend of many eaux-de-vie produced in various years. There are occasions, however, when a single-vintage Cognac exhibits refinement that allows it to stand on its own, without rough edges that only blending can artfully smooth away. Such is the case with Rémy Martin’s latest release, the 1989 Grande Champagne ($300, 750 ml), an 18-year-old, single-vintage eau-de-vie made from 100 ?percent single-estate grapes.

Although 1989 proved to be a less-than-stellar year for some French winemakers, it was a boon for Cognac’s Grande Champagne region, where the variance between the summer’s warm days and cool nights was minimal. “A burst of heat in April caused the grapevines to bud early,” says Vincent Géré, director of Rémy Martin Cognacs & Estates, who has witnessed the progression of the 1989 Grande Champagne from vineyard to bottle. “So by August we knew it would be an early harvest—in fact, a month ahead of schedule. But temperate weather and scanter-than-usual rainfall led to small, robust grapes. For us, it was a perfect vintage.”

Even so, Georges Clot—Rémy Martin’s cellar master at the time—selected, from among a thousand Grande Champagne vineyards, Ugni Blanc grapes from only four estate-owned plots. After distillation of the powerful, concentrated wines, he set aside 95 barrels as a possible single-vintage spirit—a decision not without risks. The promising eau-de-vie that was removed from Rémy Martin’s blending inventory back in 1989 represented a sizable investment that might never be recouped if Clot’s expectations went unfulfilled. After all, aging Cognac is a mysterious art, and there are no guarantees as to how the spirit will mature over time.

The rules of the Bureau National Interprofessionnel du Cognac (BNIC) further complicated matters. The French agency, which regulates Cognac production, requires that barrels marked for vintage designation be stored in a locked cellar on the estate where the grapes are grown. The BNIC retains one of two keys necessary to unlock the cellar door, thereby ensuring the presence of a government official should the cellar master want to assess the Cognac’s progress. With so much red tape to contend with, it is little wonder that single-vintage bottlings are rare. In fact, the 1989 Grande Champagne is only the third vintage bottling to come from one of the “big four” Cognac houses (Rémy Martin, Hennessy, Courvoisier, and Martell).

“We created it to prove a point,” says Géré. “To play a great symphony, you need to have a great philharmonic orchestra that is full of great instruments. A vintage is like an instrumental soloist that you separate from the rest, which is testimony to the fact that if you can make great blends, it is because you have individual components of this quality.”

During the aging process, evaporation (commonly referred to as the “angel’s share”) claimed the equivalent of 23 barrels of the liquid; thus, only 72 barrels remained, the contents of which were bottled last January. Rémy Martin allocated all 1,500 cases of the 1989 Grande Champagne to the United States, where it was scheduled for a September release.

“The 1989 Grande Champagne Cognac is very precise, very clear-cut, a little bit sharper, perhaps because it has been released at a higher 90 proof,” says Géré. “But what is striking is the presence of two aromatic notes not normally found in Cognac. One is clove, and the other is figs. The whole taste builds on those two aspects, yet it still has all the qualities of the Rémy Martin style, with intense aromas, incredibly mellow and smooth, and a lot of length and harmony.”