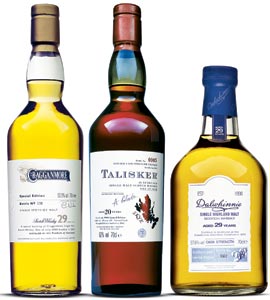 We tend to associate old and rare spirits with small, obscure producers quietly meting out their precious nectar in enclaves of Scotland’s sprawling countryside. The discovery of something wonderful in an unexpected place is, after all, the aim and end of the connoisseur’s art—and certainly its supreme pleasure. But in today’s crowded world, such a serendipitous unearthing becomes increasingly unlikely, given that most stockists who know the market value of their holdings remain reluctant to part with them. Thus, sometimes it pays to look up, rather than down.

Diageo, as the biggest spirits company in the world, owns approximately half of the Scotch whisky industry, including dozens of malt-whisky distilleries, each of which has been laying down stocks of whisky in casks for generations. The company’s cellars are as vast as their contents are legendary. Since its main focus has long been on blends (most notably Johnnie Walker and J&B), Diageo’s bottled malts have never achieved the recognition that some of them undoubtedly deserve. Nevertheless, when the company decides to bottle some of its aged malt whiskies, the event assumes momentous proportions for whisky drinkers everywhere.

More significant still is the company’s decision to introduce a cadre of Special Releases on an ongoing annual basis—a plan informed by growing interest in unusual whiskies and the firm’s extraordinary stock. This year’s selection (listed below) includes a 20-year-old Talisker, a 29-year-old Cragganmore, and a 24-year-old whisky from Port Ellen, a plant that long ago ceased to distill.

This whisky is light in color for such an old spirit. Its nose suggests dried fruits and citrus peel, while the flavor is slightly resinous and citric. The finish is sweet, then dry. ($250)

The signature flavors of the 12-year-old Cragganmore appear in its older sibling: vanilla, caramel, and smoke on the nose, while to the palate it is honey-sweet. ($230)

This whisky is less phenolic than the younger Talisker, and its virtues are, consequently, more apparent. Its nose is redolent of vanilla and smoke, and its taste offers a touch of honey before the astringent finish. ($150)

A delightful dram whose complex nose is difficult to differentiate into its constituent aromas, though the overall impression is of a charming, well-matured whisky. Nuts,  caramel, vanilla, and custard cover a fruity base. The taste is sweet and peppery, so we recommend the addition of water until the pepperiness reaches a suitable level. ($300)

This distinctive whisky is resinous and slightly woody, with an aroma of fermentation, smoke, and cereal—not unlike the scent of a distillery. This spirit is dead dry on the palate, perfect for the ascetic connoisseur. ($330)

A sweet-sour nose with lovely, lingering aromatic scents. The whisky exhibits a fruitiness, and the taste is mild with a dry finish, exemplifying old-wood flavors derived from the cask in perfect balance with the spirit’s natural character. ($520)

Surprisingly little smoke for a Port Ellen. It is resinous and woody, nutty with a hint of seaweed. It tastes sweetly of caramel with a dry, peppery finish. ($200)

The aroma of this whisky speaks of black bun, a rich Scottish pudding that contains dried fruits, nuts, cinnamon, and allspice. It has resin and tannin as well, though it tastes sweet, rich, and mild. ($1,573)