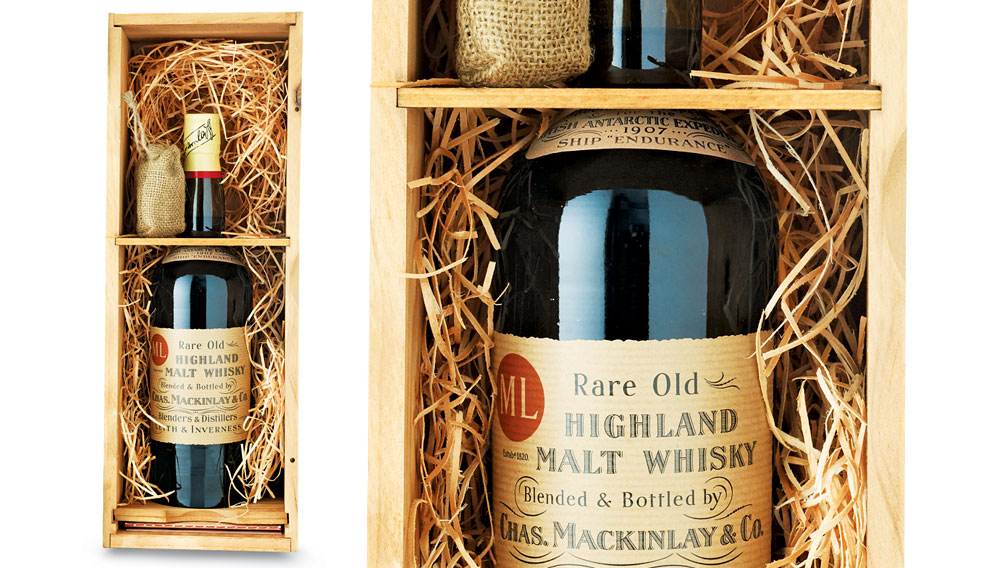 Records may stand for a period of time, but they never endure. This knowledge may have traveled southward with Irish explorer Ernest Shackleton, who, in 1907, led an expedition from England to Antarctica aboard Nimrod, in hopes of being the first man to reach the South Pole. This attempt was his second: In 1901, he journeyed to the remote continent with the Discovery Expedition, which reached a record-setting latitude of 82°16’ 33″ S, but illness forced Shackleton to return to Europe on a relief ship. Determined to prove his mettle, he organized the Nimrod team, which bested the Discovery record, attaining a point nearly 97 nautical miles from the pole. Though others soon surpassed his achievement (Norwegian Roald Amundsen finally arrived at the South Pole in 1911), Shackleton left behind him a legacy undreamed of by his rivals—and one that, more than 100 years later, answers the dreams of whisky lovers everywhere.

When the haggard crew finally sailed for home in 1909, three cases of blended Scotch remained buried in the snow beneath the expedition’s hut. These were the remnants of a whisky Shackleton had personally selected for his expedition—Mackinlay’s Rare Old Highland Malt Whisky, a popular brand of that era from the Glen Mhor distillery in Inverness. The bottles lay undisturbed until 2007, when members of the New Zealand Antarctic Heritage Trust discovered them in their weather-beaten wooden crates during a commemorative journey on the centennial of Shackleton’s Nimrod Expedition. In the interest of preserving the historical record, the New Zealanders left two of these cases as they were found but flew the third case to Christchurch, where conservators at the Canterbury Museum carefully thawed and examined it. Inside, 10 of the bottles were still intact; three of these were taken to Scotland for analysis.

Mackinlay whiskies are no longer produced (the Glen Mhor distillery was demolished in the 1980s), but the brand is now owned by Whyte & Mackay, whose master blender, Richard Paterson, examined in detail the 100-year-old whisky to reveal its method of production. Using a syringe to withdraw a sample, Paterson determined that Orkney peat was used for the malting, and that the whisky had been aged in American white-oak sherry casks. Thus enlightened, the master blender set about replicating this storied Scotch using similar single malts from Dalmore’s vast cellars of aged stocks from Speyside and Island distilleries, as well as whiskies from the original Glen Mhor distillery.

The result is the newly re-created Mackinlay’s Rare Old Highland Malt, a 94.6-proof, straw-gold whisky presented in replica bottles priced at $175 apiece and packed in facsimiles of the 1907 wooden crates. The distiller will donate the U.S. equivalent of £5 to the New Zealand Antarctic Heritage Trust for each bottle sold, but enthusiasts will require no charitable incentive to entice them. With aromas of apple, pear, pineapple, and a hint of oak—essences that carry over on the palate, intermingled with flavors of gentle smoke, toffee, and pine nuts—this warm blend is the perfect dram for an icy night, as Shackleton and team no doubt discovered.