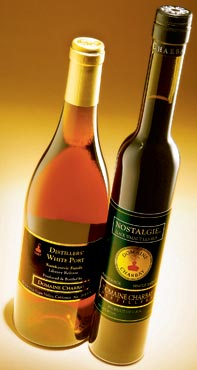 Traditions run deep in California’s wine country. But none runs as deep, or can be traced back so far, as that of the little known firm of Domaine Charbay. Beyond the small, unassuming sign that marks its location on Napa Valley’s Spring Mountain, and within the rusticated farmhouse in which one finds a cozy tasting room, a remarkable family reaps the sumptuous harvest of a 250-year legacy that embraces much more than wine.

High above the bustling main street in St. Helena resides master distiller Miles Karakasevic’s eclectic family-owned-and-operated business, which specializes in small-production distilled spirits, as well as fortified wine and port. Along with his wife, Susan, daughter, Lara, and son, Marko, Karakasevic, who moved to North America from Serbia in the 1960s, continues a family distilling tradition that dates to 18th-century Vienna.

Whether crafting a double-barrel, hop-flavored whiskey sold in handpainted, numbered 750 ml bottles ($325); Nostalgie, a black walnut liqueur ($75 per 375 ml bottle); or exotic white port made from Chardonnay, sauvignon blanc, and the family brandy ($130 per 750 ml bottle), Domaine Charbay uses only the highest-quality ingredients to build its exclusive elixirs. “We’re not in it for everybody, and we don’t have enough for everybody,” says Marko, who represents the family’s 13th generation of distillers and has been working with his father since age 10—two-thirds of his lifetime. “We’re interested in people who want the good stuff, because that’s all we make.”

Marko’s passion for perfection becomes crystal clear when he discusses the methods he and his father employ for their most popular product, Charbay flavored vodka ($30), which they produce in four flavors: blood orange, key lime, Meyer lemon, and ruby red grapefruit. “I knew I could make a better-tasting, fresh-picked, fruit-flavored vodka that no one else in the market was making,” he exults. “It takes us about six months, and we make it only once a year when the fruit is ripe.”

Miles and Marko create the fruit extract used to flavor the spirit; the vodka itself is the only product not distilled by the family, though it is custom-distilled to their specifications. The 300-case initial production in 1997 has grown to a current annual figure of 30,000 cases. Two new flavors—Oregon red raspberry and green tea (“For the health nuts,” Marko jokes)—are in the pipeline.

The vodka’s success paved the way for the family’s most recent release: triple-distilled Tahitian Vanilla Bean rum. The spirit, made on the property from imported Jamaican and Hawaiian sugarcane syrup, is one of only a handful of rums distilled in the United States. “The Tahitian vanilla beans are $400 a pound, but it’s worth it,” Marko enthuses. “It’s such an amazing vanilla flavor.”

The rum—also released in an unflavored, clear version—formed part of the first shipment from Domaine Charbay’s inaugural wine and spirits club. Lara, the company’s publicity director, describes the club as “rather eccentric, because it’s always a surprise as to what—and when—we will be coming out with something.”

This serendipitous, even playful approach to serving their clientele does not diminish the seriousness with which the Karakasevics apply themselves to their work: They have transformed a European master distilling tradition into a distinctly American artisan craft. “In our family, distilling is an art,” Marko explains. “The definition of master distiller in my family is the ability to meet and exceed your instructor. That’s my dad, so I’m on my way.”

also available through the

How to Watch the First 2020 Presidential Debate