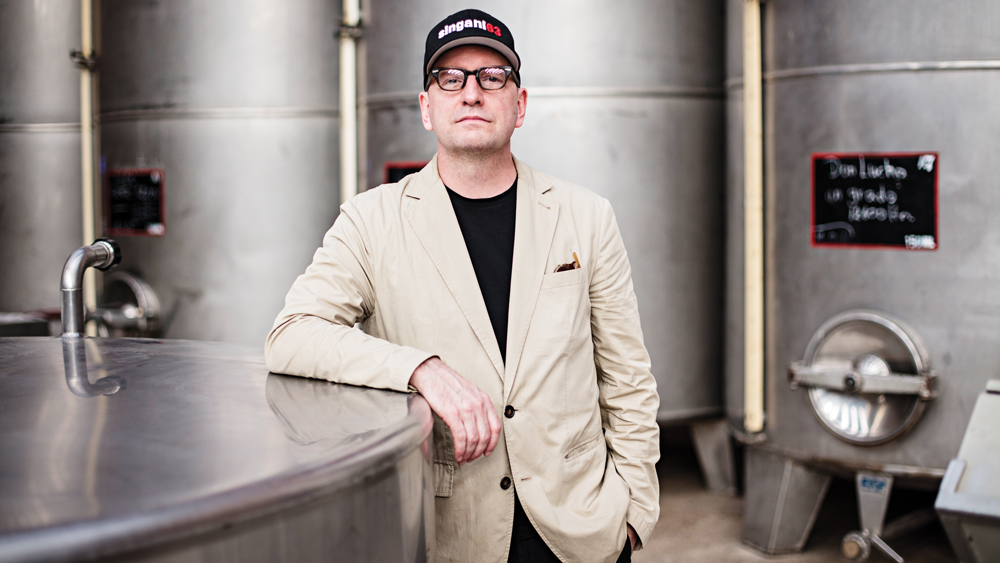 Steven Soderbergh scrambles to the roof of a semitruck, sets up a tripod, and begins to shoot. Before him lie undulating rows of grape vines, the leaves glinting gold in the early dawn as a harvest crew begins the day’s labor. It is an improbable scene: We are in the far south of Bolivia, a country not exactly known for wine grapes. And Soderbergh—the groundbreaking director whose credits span from 1989’s Sex, Lies and Videotape to Traffic, Ocean’s Eleven, Magic Mike, and the just-released Logan Lucky—isn’t here to shoot another film. He is simply here to visit—and, at the moment, photograph—the source of singani, a clear and compelling spirit that he is almost singularly responsible for introducing to the United States.

The national spirit of Bolivia, singani is an 80-proof tipple that has a 500-year history, dating back to when the Spanish first settled here. It is made from Muscat of Alexandria grapes, which grow in bunches that can be the size of a basketball. The grapes are incredibly liquid, perfumed, floral, and sweet, with almost no tannic bite—the best grapes you have ever eaten. And when they are turned into wine and distilled, they become a spirit that tastes uncannily like the grapes themselves.

Soderbergh—a longtime “vodka-and-rocks guy”—fell hard for singani while filming his 2008 epic, Che. The spirit was not exported to the States at the time, so after figuring out how to keep himself supplied, he decided to create his own brand. Singani 63—the number refers to Soderbergh’s birth year—is a premium example of the spirit, made in Tarija by Casa Real, a fourth-generation family distillery that employs cutting-edge techniques and copper stills from Cognac, France.

Set 6,000 feet up in the Andes, the Tarija valley is perhaps the world’s least touristy wine country. The landscape is alternately lush and lunar, etched with craggy palisades and deep craters that need to be filled before being planted with vines. Soderbergh captures the scenery from his perch atop the semi as the truck is filled, basket by basket, with grapes. After he climbs back down, he shares some of his thoughts about singani and other discoveries he’s made in Bolivia and beyond.

Tell us about your first sip of singani.

It was 10 years ago in Madrid, at our start-up party for Che. It was shaping up to be a difficult production, and I was very anxious about it. Rodrigo Bellott, our
casting director, gave me a bottle as a gift, and I said, “Well, let’s open it up.” And I spent the next 6 months drinking it.

I think I said, “I’ve gotta call vodka on the phone and tell her that I’ve met someone,” because it really was that immediate. It really was one of those encounters that alters your life. Looking back, I’m not surprised that it happened at the end of a day that was very intense and stressful. I needed a happy place on that project. Singani wasn’t exported at the time, so I was intent on Rodrigo figuring out a singani mule train that would go from Bolivia to wherever we were during the production. We had it every night—on the rocks.

The assistant editor would prepare that day’s footage, and I’d edit at night with the core camera and editorial team. So it’s kind of like a salon, and it was all lubricated by singani. I think those associations contributed to becoming an importer, with the idea of, “Well, we could just move the salon to the United States.”

Soderbergh’s Singani 63 is made from Muscat of Alexandria grapes by the family-owned Casa Real distillery in Tarija, Bolivia.  Photo: Courtesy Patricio Crooker

What do you love about it?

There are three acts of singani. The first is the nose, which isn’t like anything else. The second act is the taste: You get the floral notes and an almost peppery thing when you swallow it, and there’s no burn, which was something new to me.

And the third act?

You’re not supposed to talk about this—you’re not allowed to make a commercial that says it’s very buzzy. But you do feel buzzed and not drunk. There is no diminishment—I’m not slurring, I’m not heading for the end zone. I found the effect of it to be more like a high than a drunk, and that was interesting, too.

Introducing Singani 63 has been like a 3-year bar crawl across the U.S. You must’ve found some great places.

So many. We just went to a really interesting bar in Portland called Bible Club PDX. You get out of the car and you’re in a neighborhood, houses all around. There’s no sign; you just walk into one of the houses and it’s like you stepped into a portal into another century. Nothing in there—including all of the utensils that the bartenders use—is younger than 1920.

Gwen in Los Angeles was also insane. Every layer of the experience is kind of exceptional—the physical space, the atmosphere, the presentation, how you interact with the people, the menu, the cocktails. In San Francisco, 1760 and Foreign Cinema created incredible drinks. It’s fun to be reminded that creativity takes all kinds of forms. What these people do requires as much experience and imagination as anything that I’ve ever done.

The way it’s been working lately—where I’m the director and the cinematographer and the editor—if I’m not on set, I’m in my hotel room doing those jobs. So it’s really hard for me to take advantage of the opportunities in terms of travel. But no matter how busy I am, I will carve out time to read. So when you talk about discoveries over the last year and a half, I read both the Elena Ferrante novels and the [Karl Ove] Knausgaard autobiography, the five volumes of My Struggle. I’m dying to read the last installment of Knausgaard. They’re all good, but there’s a build coming.

How else do you relax?

When it comes to going on vacation, I don’t swim, because I got thrown into the pool when I was a kid and I sank to the bottom and had to be rescued. I don’t want to jump out of an airplane, I don’t want to hang glide. I literally want to—there’s a term in the film business, a thing called a Translight. It’s a photograph that’s been blown up to like 20 feet by 80 feet and it’s outside the window of the soundstage to make it look like you’re in Paris. So the joke that I have with my wife is that I just want to read somewhere where the Translight is different. And it really does, psychologically, work for me.

So what’s your favorite “Translight”?

We go to this place in Turks and Caicos, the Amanyara. It’s extremely quiet, even for the Turks, since it’s at one end of the island. We’ve also been making regular New Year’s trips to London. We’ll go see a couple of plays, see some friends for dinner, and stay at the Charlotte Street Hotel near Covent Garden. It’s the perfect hotel. It kind of combines a classic, English approach to aesthetics and service, but it’s been brought into the 21st century. I guess I got into the right business, because I really like hotels.

What is your all-time favorite?

When we were shooting Erin Brockovich and staying at the Holiday Inn in Barstow, it was the happiest I’ve ever been in my life.