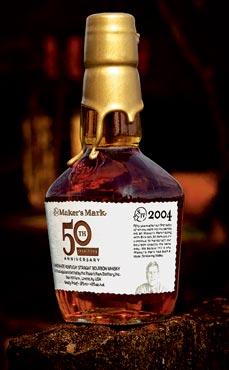 The way Bill Samuels Jr. tells it, his family had been making bourbon for seven generations when, in 1954, his father decided to create a whole new style of whiskey. To dramatize his determination to break with the past, the distiller took the only remaining copy of his family’s 170-year-old recipe and set it on fire. The moment became even more dramatic, however, when the burning parchment also set the Samuels’ living room drapes ablaze and almost ignited Bill Jr.’s sister in the process. “We didn’t talk much about Dad’s recipe-burning episode after that,” Bill Jr. recalls.

Near-disaster notwithstanding, the elixir the distiller created—Maker’s Mark—transformed what was once a commodity item into a luxury libation and spawned a new class of upscale whiskeys: small-batch bourbons. And so, a half century later, aficionados of fine spirits gathered in that same house, a handsome Victorian structure in Loretto, Ky., to commemorate the event. Today, with its characteristic hand-dipped red wax top, the Samuels family brand enjoys such a cult following that commemorative bottles topped in waxes of other colors sell for as much as $2,000.

But when Bill Jr. was born in 1941, bourbon enjoyed no such éclat. With the repeal of Prohibition in 1933, American whiskey makers rushed to market with goods that were made in haste and under-aged to satisfy the thirst of Americans who had not tasted a legal drink in more than a dozen years. “It was mostly rotgut,” says Bill Jr.

Five years after putting up the first batch of his new bourbon, Bill Sr. shared it with friends at the 1959 Kentucky Derby. It was, they all agreed, full and rich and sweet, without the bitter overtones associated with rye-flavored bourbons. The company’s marketing style was different, too. The elder Samuels wanted to be sure his customers appreciated his product. “Dad used to tell our salesmen, ‘I don’t want you to sell my whiskey to anybody unless they really really really really want to buy it,’ ” recalls Bill Jr. As a result, says Jimmy Conn, the company’s first salesman, “I went months before making a single sale.”

If, at first, this approach cost the company sales, in time it fed the mystique of Maker’s Mark. So, too, did Bill Jr.’s refusal—after he was named CEO in 1975—to modernize or automate the production process to meet the soaring demand for his bourbon. That old-fashioned style has not changed to this day. Where most commercial distilleries have an industrial appearance, the Maker’s Mark site is strictly 19th century, with an antique firehouse, landscaped grounds, an old covered bridge, and an aging shed that looks like a red-shuttered barn. There is more than aesthetics involved. Instead of a hammer mill, Maker’s Mark uses a slow, antique roller to grind grain without scorching it. The yeast that goes into the fermenting mash is descended from the same strain used to produce Bill Sr.’s first batch of Maker’s Mark. And in the old still house, carpenters can be seen building and scorching barrels.

Maker’s Mark is no longer the only fine, small-batch bourbon on the market; its success has inspired Knob Creek, Evan Williams, A.H. Hirsch, Blanton’s, Basil Hayden’s, Baker’s, Booker Noe, Hancock’s Reserve, Elmer T. Lee, and Rock Hill Farms, among others. Like Bill Jr., the distillers of these spirits understand that the true measure of a sour mash whiskey is the sociability it instills. A glass of fine, handcrafted bourbon is no mere libation; it is an invitation to sit a spell, to reminisce, and to enjoy the company of friends. Indeed, for gentlemen of the South, it is the stuff of civilization itself. Although it might be possible to produce on an assembly line a whiskey possessing as rich an aroma and as flavorful a taste as the small-batch bourbons, that whiskey could never reflect the same level of civility.