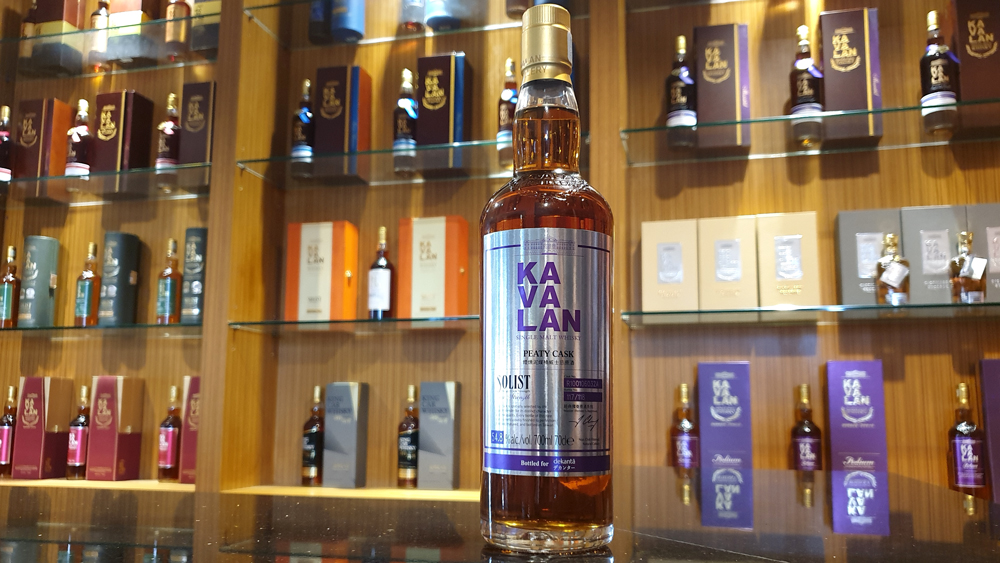 In 2005, Kavalan opened the first distillery on the island of Taiwan, a region no one is likely to have ever mistaken for the isles of Scotland. At the time, few people outside the company could have imagined the subtropical climes of Yilan County would engender world-class whisky, but that is precisely what’s happened. Kavalan wins awards, and lots of them. As a result, the whisky has become quite fashionable among collectors. With its ever-present humidity and an average temperature of 72 degrees, the area just south of Taipei is literally a hotbed of high-end hooch.

The latest must-have release from Kavalan is its Solist Peaty Cask ($399), the second limited-edition release in a range of single-cask whiskies curated by online retailer dekantā, home of the world’s largest online selection of Japanese spirits. Up until recently, Kavalan’s peaty cask whiskies were only offered for sale at the Taiwanese distillery. Slowly but surely, however, wares from the peated range are being bottled exclusively for online retailers. The Solist Peaty Cask is the sole peated whisky from Kavalan to be made available off premises in 2018, and there are but 116 bottles at that. In other words, here’s your chance to get something that usually isn’t easily gettable.

Interestingly, Kavalan Solist Peaty is not a peated whisky in the traditional sense, in which the barley grain (a.k.a. damp malt) is exposed to pungent peat smoke during drying. Instead, Kavalan’s master blender Ian Chang takes unpeated whisky and rests it in casks that were formerly used to mature the peated stuff. The reason for this is twofold: peat isn’t a readily available fuel source in Taiwan, and folks in that part of the world generally prefer fruity rather than smoky drams.

You might say the 2018 Solist is a peaty Scotch in the same way Snickers is a chocolate bar. Peat is part of the flavor profile, of course, but the essence of the whisky—the nougat, caramel, and peanuts, if you will—is a combination of tropical fruit, vanilla, and buttery notes that subjugate the smoke. At 54.8 percent alcohol by volume, the 2018 Solist brings some heat, but by and large it’s an easy-drinking-session whisky with a smooth, satisfying finish.