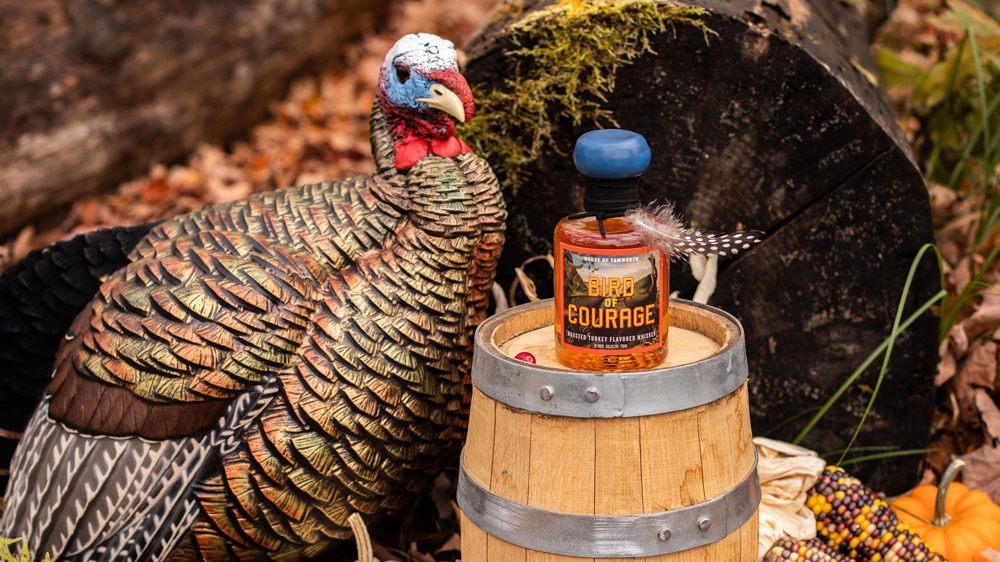 Every year in late November you’ll find a bunch of whiskey bros on social media posting about how they are going to drink some Wild Turkey with their Thanksgiving dinners. And kudos to these fellas (and yeah, it’s mostly dudes) for the creativity of this low-hanging dad joke. New Hampshire’s craft distillery Tamworth Distilling apparently took this turkey-whiskey celebration as a challenge because distiller Matt Power and his team have created Bird of Courage, a whiskey with roast turkey actually infused into the liquid. Of course, this is the same distillery that has been responsible for such spirits as Deerslayer Venison Whiskey, Corpse Flower Durian Brandy and Eau de Musc, a whiskey flavored with beaver butt (“the oil extract from the castor gland of the North American beaver,” to be more precise).

Mezcal de pechuga, which is mezcal redistilled with raw chicken or turkey breast hanging in the still to infuse it with flavor, comes to mind when considering this whiskey. According to Power, it wasn’t exactly the inspiration, but “it was nice to know we weren’t totally alone in the world of avian liquors.” Fair enough, so let’s dive into the details, because the process is truly fascinating and combines both gin and whiskey techniques. The core liquid is five-year-old bottled-in-bond bourbon distilled at Tamworth, with a familiar mash bill of 81 percent corn, 12 percent rye and 7 percent malted barley. And now things begin to get weird. An entire Thanksgiving dinner made from local ingredients from the Northeast was infused into the whiskey using techniques more in keeping with gin production than bourbon. Flint corn, chestnuts, apples, cranberries, squash, sage, sweet potatoes, stuffing and an actual roasted turkey were all prepared in traditional methods as if they were going to be eaten. Then each was separately infused into the bourbon and redistilled on a rotary evaporator still.

“The redistillation carries over the character of the base whiskey as well as the aromas of the infused material,” explained Power via email. “The heavier aromatics that get extracted from the oak (vanilla, burnt sugar, etc.) do get left behind in this process. The redistillates would be each considered flavored whiskey of their own within the production process.” Finally, these redistilled spirits were all blended back together with the original unadulterated whiskey to a final proportion of about 40 percent “aromatic distillates” and 60 percent bourbon. Power said these methods were used so that Bird of Courage would still be considered a whiskey according to the TTB, although it’s now technically classified as a “flavored whiskey.”

But of course the most important thing, as always, is how the whiskey actually tastes, and I have to say I enjoyed this way more than I expected. The nose is bright and crisp, with some lemongrass, cranberry, sweet honey and a bit of spice. The palate is ever-shifting and surprising, alternating between young wood, fresh sage and parsley, butter-roasted root vegetables, and a friendly clash between sweet and savory notes. To be clear, power of suggestion cannot be discounted when you know the intimate details of what goes into a whiskey. But I’m all in with Bird of Courage because it’s interesting and pretty damn good. About the name—according to Tamworth founder Steven Grasse, Benjamin Franklin actually thought that the wild turkey should be the symbol of America rather than the eagle, due to its tenacious courage. Unfortunately for turkeys but to eagles’ great relief, we find the latter giant birds on our tables at Thanksgiving, and now, at long last, in a whiskey (vegans, take note). So don’t be a turkey, and be thankful that you can gobble this craft whiskey down (Ok, I guess I’m doing the Thanksgiving dad jokes now).