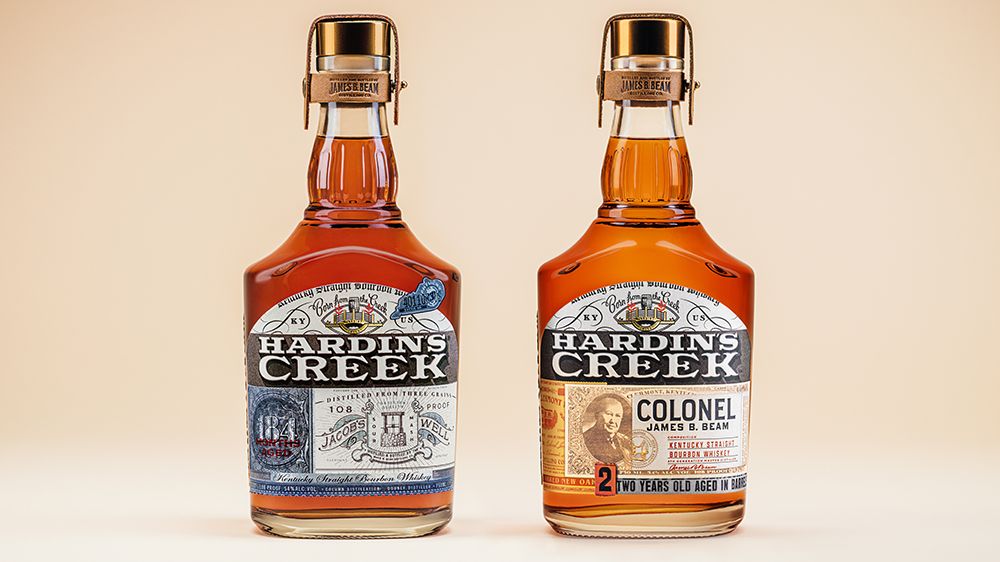 There’s a lot going on at the James B. Beam Distilling Company, as the Clermont, Kentucky home of Jim Beam is now officially known. Some of the most intriguing whiskey coming out of Beam these days is the work of Freddie Noe (who now holds the title of co-master distiller with his father Fred Noe), specifically his Little Book lineup of blended whiskeys. The father-son distilling duo is the force behind the new Hardin’s Creek brand, an ongoing release that will consist of limited-edition whiskeys that stray from the familiar Beam whiskey range.

Hardin’s Creek launches in June with two new whiskeys, Jacob’s Well and the curiously young Colonel James B. Beam. While most whiskey drinkers know that age ain’t nothing but a number, releasing a two-year-old bourbon priced at $80 is indeed a bold move. I had a chance to talk with the Noes about what went into these whiskeys and why they decided to launch this new series.

First, let’s take a look at the what and the why of the whiskey. Hardin’s Creek is named after the actual creek that powered founder Jacob Beam’s mill in 1795 when he was just getting started making whiskey.

“I’ve often wondered in my career how I could pay homage to what Jacob did… So this brand would be a cool place for me specifically to get inspiration from the story of Hardin’s Creek,” Freddie tells Robb Report. “You’ll see a lot of whiskey that’s come to life under this brand.”

If the name Jacob’s Well sounds familiar, that’s because a bottling with the same name was released in 1995 to celebrate Beam’s 200th anniversary, but didn’t really do as well as the company hoped. The old Jacob’s Well was aged for 84 months and bottled at 84 proof, and consisted of a blend of the regular Beam mashbill and the high-rye Old Grand Dad mashbill. The new version of Jacob’s Well is also a blend of the two mashbills, each aged for 184 months (just over 15 years), and bottled at 108 proof. The grainy, nutty Beam character is present on the palate but with a richer, more mature baseline, along with lots of cherry, pineapple and ripe fruit notes, some creamy custard and butterscotch, ripe plum, and a bit of smoky char on the finish.

Colonel James B. Beam, on the other hand, is a difficult one to wrap your head around, but maybe that’s not such a bad thing. It’s distilled to a lower proof (115) than other Beam whiskeys in order to amplify flavors derived from fermentation and allow barrel sugars to mingle more broadly with the liquid. It is bottled at 108 proof like Jacob’s Well. Some of the first whiskey sold out of the distillery after Prohibition was also called Colonel James B. Beam, and was two years old because at the time the law required it. This whiskey adhered to the regular Beam process in terms of production, which makes one wonder whether this is basically younger Jim Beam bottled at a higher proof. And while it is different from the mainline whiskey, overall it seems to be very much about the history of Jim Beam. “A lot of our other brands have guardrails around them in terms of proof and age so these new releases can really be storytelling elements,” Freddie says.

The story here does read older than two years, but still much younger than anything you’ve likely tried from Beam before. The flavor profile is classic Beam with more heat from the higher proof, with nutty and grainy notes, as well as popcorn, vanilla, caramel, baked apple, hot cinnamon and allspice. One note that keeps popping into my head as I sip is Entenmann’s crumb cake, a nostalgic flavor from childhood for many.

Beam is a distillery and company, like Jack Daniel’s, that could just rely on its wildly popular core lineup and flavored whiskeys and not bother with any line extensions or innovations. The bigwigs would continue making lots of money, and customers would probably not complain. But the last few years have proven that this will not be the case, and the spirits world is better for it. Hardin’s Creek is a mixed bag, but that’s OK because while every release can’t be a winner, I’m happy to try whiskeys that stray from the norm. I think one glaring issue is the price of Colonel James B. Beam, which I think is wildly inflated (for that money I’d stick with Colonel E.H. Taylor, if you can find it at SRP). Still, I’m looking forward to seeing what Fred and Freddie have in store with the next Hardin’s Creek release.

What Our Scores Mean