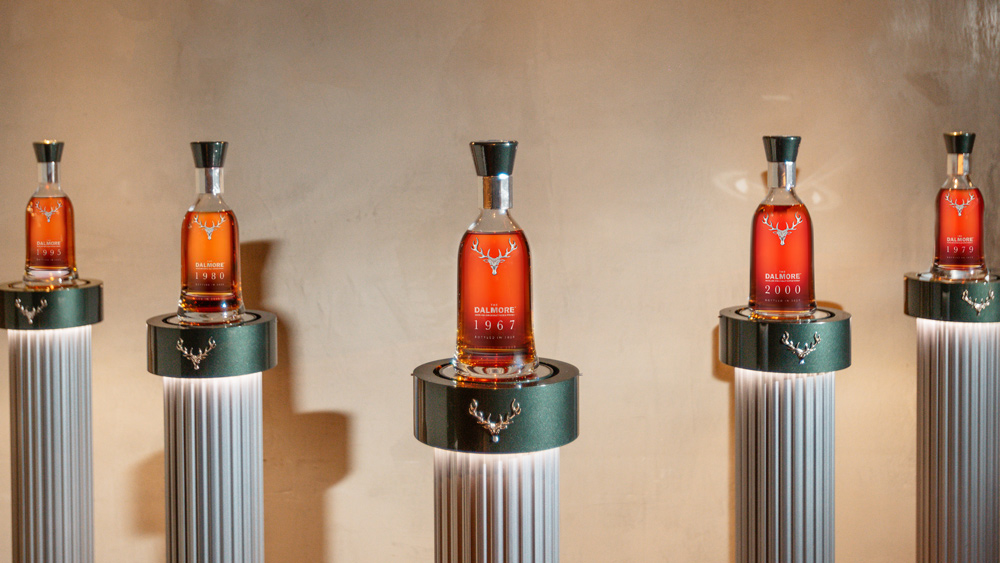 In the cult-classic film Sideways, a cinematic love letter to wine, actor Paul Giamatti waxes poetic about how the product of the vine “connects you more to life,” adding, “I like to think about what was going on the year the grapes were growing.” It’s a sentiment that applies equally to the ingredients and processes involved with spirits, and one that resonated profoundly with me at a recent tasting of some of Dalmore’s most exclusive scotch, including an expression from 1967—my own birth year.

The older someone gets, the less likely to taste juice that’s been on the same number of trips around the sun—the liquid manifestation of a lifetime. My moment came recently at Wally’s Wine & Spirits in Santa Monica, Calif., which hosted a dinner paired with the Dalmore Decades. The five-bottle set comprises cask-strength samples from the 182-year-old distillery that range from the 1960s through to the new millennium.

We entered the whisky wormhole with the 2000 selection, which spent 20 years solely in Matusalem Oloroso sherry casks, breaking from Dalmore’s traditional two-cask aging program that employs American white oak bourbon barrels and butts formerly used to house the 30-year-old sherry. Redolent with baked fruits on the nose, it delivers black cherry complemented by dark chocolate and orange—the latter two being de rigueur of Dalmore—which juxtaposed brilliantly with a serving of salt-roasted beets and aged Balsamic.

A sample to savor.  Photo by Jack Rodriguez, courtesy of Dalmore.

The subsequent 1995 sampling—aged in bourbon barrels before rounding out its time in Tintilla de Rota port casks—was among the most vibrant of the five. A Hawaiian luau in glassware, it elicited floral hints succeeded by sweet citrus. The combination played delightfully off the grilled duck entrée with, fittingly, Maui onion jus.

The following two expressions presented quite differently as they showcased disparate approaches taken by master distiller Richard Paterson, whose own time at Dalmore extends more than half a century. For the 1980 selection, presented alongside Kurobuta pork, Paterson flipped the script. After the whisky went through the bourbon- and sherry-cask maturation route, he sent it back to bourbon barrels for another five years. The resultant traces of smoke seem non sequitur as the distillery eschews the use of peat. That third step, however, draws the latent smoke from the staves of the bourbon cask and, as Craig Bridger, Dalmore’s head of advocacy explains, “slaps awake an older whisky.”

The 1979 bottling goes through the same initial bourbon-barrel aging protocol, where it gathers tropical fruit characteristics, followed by the infusion of chocolate and orange from the Matusalem sherry butts, though that’s where similarity with its 1980 sibling ends. The ’79 was next sequestered in casks that formerly housed 1952 Graham’s Port, considered a unicorn vintage. The singular trifecta is responsible for the pistachio, maple and date nuances that dominate; a rich complexity that was shared by the black truffle fondant drizzled around a course of Wagyu strip.

Craig Bridger, head of advocacy for the distillery and tasting guide for the Dalmore Decades–paired dinner.  Photo by Jack Rodriguez, courtesy of Dalmore.

The ne plus ultra of the evening, at least for me, was the aforementioned 1967 tasting. The juice’s exclusivity is enhanced not just by age but its finish in casks originally laden with Mont-Redon Châteauneuf-du-Pape wine. Although it’s touted to have notes of clementine and ground coffee, I found the overall personality to be more subtle at first sip than the previous expressions, especially as paired with chocolate gelato. Yet it was slowly revelatory, like a sage elder with much to offer if given the appropriate level of patience. Unlike the others, the sample reflected its longstanding marine influence with a delicate suggestion of the North Sea’s salt air. Lingering on the palate, it was reminiscent of my own milestones—both sweet and bracing.

Only 15 examples of the five-bottle Dalmore Decades collection exist, each priced at $275,000. There is, however, one other version with an additional cask-strength representation from 1951. That unique six-pack sold earlier today through the Sotheby’s Hong Kong auction for more than $1.1 million.