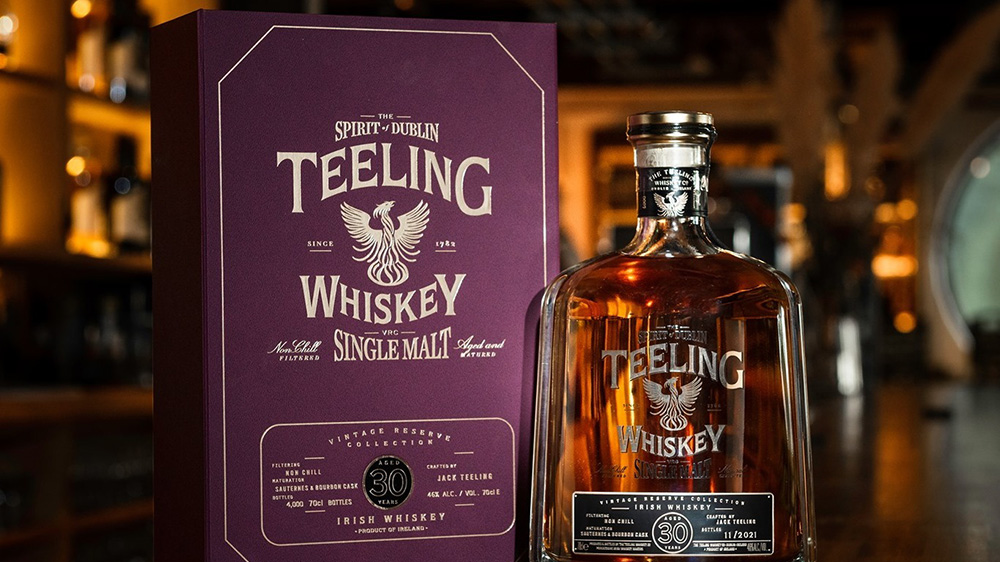 Teeling Whiskey Co. is returning to the well again.

The Irish distillery has announced that it will expand its Vintage Reserve Collection with a new 30-year-old single malt. The limited-edition release is the third expression from a critically acclaimed batch of whiskey that was originally crafted by the Cooley Distillery.

Teeling first acquired that whiskey, which dates back to 1991, 12 years ago, according to Forbes. It has already given rise to two well-regarded single malts—a 24-year-old and 28-year-old, both of which are part of the same line of limited-edition releases. The 24-year-old took home the prize for World’s Best Single Malt at the World Whiskies Awards in 2019, while the 28-year-old won World’s Best Irish Single Malt at the same show in 2021.

The latest expression was aged in bourbon casks for 21 years, before being transferred to Sauternes wine casks for an additional nine years of aging. The distillery says this “dual maturation” has given the resulting whiskey a nose and taste that carefully balances orchard fruits, like peaches and apricots, with nuts, chocolate and a hint of smoke. Although smooth, it’s said to linger on the tongue, with a touch of spice and salt.

“Our latest Teeling 30-Year-Old Single Malt is a perfect representation of everything good about Irish whiskey—from its robust nose to its fully rounded and balanced array of flavors,” founder and president Jack Teeley told Forbes. “We are very proud of this whiskey, and we hope it can continue to help forge our reputation as a truly world class whiskey.”

Teeling’s latest single malt whiskey will be available in Ireland, including at its Dublin distillery, before the end of the year, and will cost $1,100 per 700 ml bottle. If you can’t make it to across the Atlantic before then, don’t worry: It will be available stateside starting in January, with a list price of $2,199.99.

It also won’t be the last expression from the Cooley whiskey, either. The brand already has plans for older releases in the future.