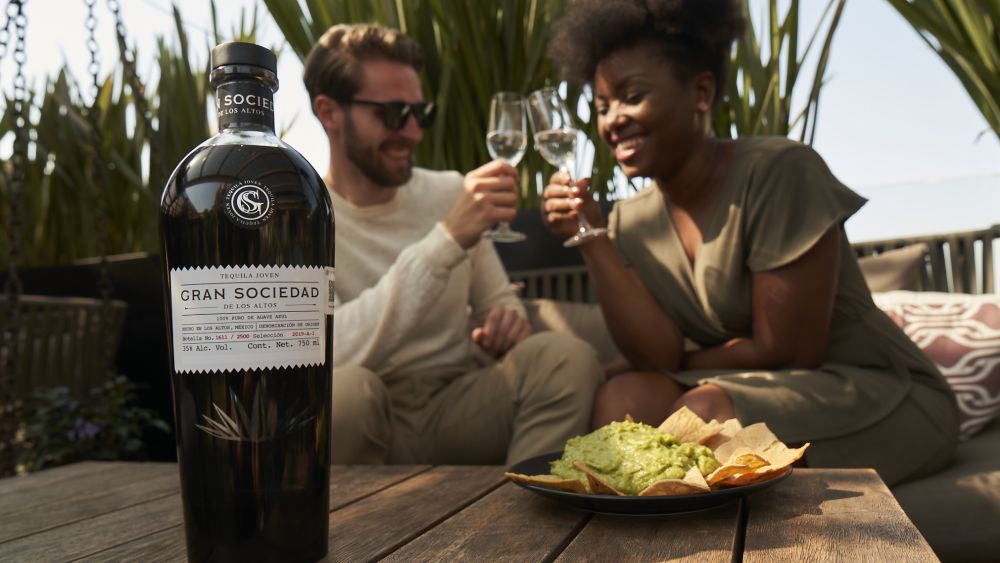 Gran Sociedad has released a new ultra-premium joven tequila, a category which is still relatively uncommon in US (joven is a designation that means un-aged tequila is blended with aged tequila). This premium bottle combines blanco with añejo tequila that’s been filtered to remove color like a cristalino, resulting in a very nice sipping spirit.

Gran Sociedad was created by a group of Mexican artists and business owners who wanted to craft a tequila that embodied the spirit of “grand society,” which is the direct translation of the brand name. They turned to maestra tequilera Yadira Hernandez to helm the distillation and blending, which takes place at Inulina y Miel de Agave (NOM 1605). While there is a record of a diffuser at this NOM (a modern piece of equipment that extracts sugar from agave via high-pressure water or chemicals), a rep for the brand says that there are two separate facilities there and Gran Sociedad is made using traditional instead of industrial methods. First, six to eight-year-old agave is harvested from the Highlands, which is then cooked in stone ovens and crushed by a tahona stone. Fermentation takes place in stainless steel vats, distillation in copper alembic pot stills and the añejo portion (30 percent of the blend) is matured in American oak barrels for about a year, the minimum required for that category. Lastly, the añejo is filtered to remove the color but retain the flavors picked up from the barrel before being blended with blanco.

This is a very good, if expensive sipping tequila. The cooked agave notes really shine through on the palate, with a bit of citrus, vanilla and baking spice as well. At a tasting event this week, the tequila was presented in both a crystal flute and small ceramic vessel, and each method accentuated different flavor profiles. I can’t help but wonder if filtering the añejo is an unnecessary step in this process (because after all what’s wrong with a little bit of natural color in your tequila), but I recognize that some consumers prefer to see a clear tequila in the bottle.

The founders of Gran Sociedad have a project in the works to benefit the indigenous Huichol communities in Mexico. Details will be revealed in the coming months, including a documentary about the importance of the Huichol people to Mexican culture that should be released in 2023.