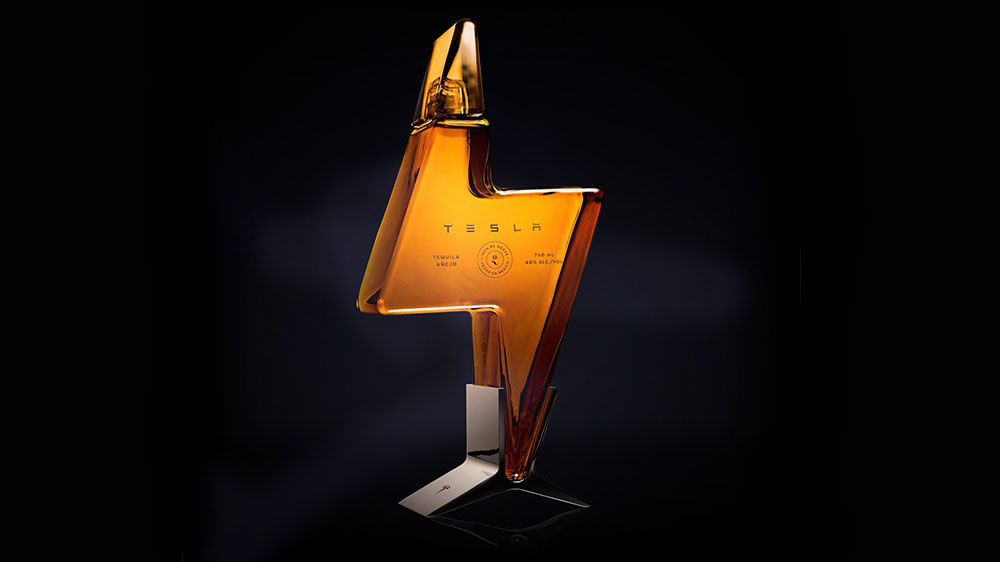 Anyone familiar with Elon Musk knows he has tendency to bounce from one idea to the next with the speed of a Tesla Model S. That’s why it’s never that surprising to see him announce a new venture out of nowhere. Still, we can’t imagine many people expected the EV maker to get into the spirits game.

The marque has just revealed that it’s next release won’t be a new EV, instead it’s a bottle of tequila, according to Tech Crunch. That’s right, you can now buy yourself a lightning bolt-shaped 750 ml bottle of Tesla’s first branded liquor for $250.

Simply named Tesla Tequila, the EV giant’s spirit is described as a “small-batch premium 100% de agave tequila añejo made from sustainably sourced highland and lowland agaves” on its website. Aged 15 months, the tequila is meant for sipping and is said to have a fruit-tinged nose and a sharp cinnamon-like finish. And, as mentioned earlier, it comes in a rather ridiculous handblown bottle shaped just like the electric charge symbol.

If you’re wondering why in the world Tesla is releasing a tequila, well, you’re not alone, but it’s also because of an April Fools’ joke. Back in 2018, Musk posted a picture on Twitter of himself passed out against a Model 3 holding a hand-written side that read “Bankwupt!” According to the caption accompanying the image, the EV maker’s CEO had been found unconscious surrounded by bottles of “Teslaquila” with “the tracks of dried tears still visible on his cheeks.” While some may question the humor of the post, it still managed to garner 151,000 “likes” and months later the company actually trademarked the name “Teslaquila.”

Is it weird for a car maker to be selling liquor considering the very real danger tied to drinking and driving? Of course! But issues of taste and discretion have never stopped Tesla before. They also aren’t stopping the brand’s fanboys from buying up the tequila, either. According to the marque’s website, the first run has already sold out. But if your curiosity has gotten the best of your, don’t worry, more will be available soon. In the mean time, you can just drink one of the best new tequilas to come out this fall.