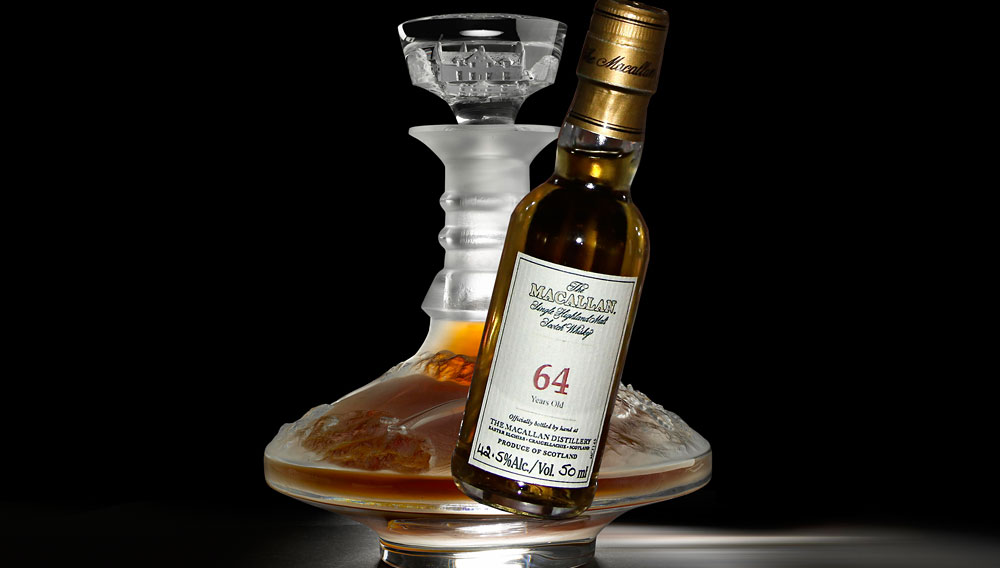 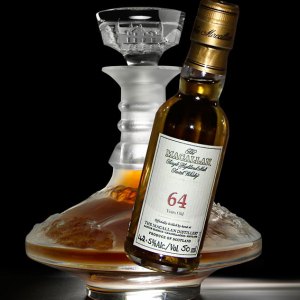 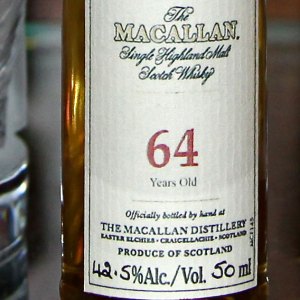 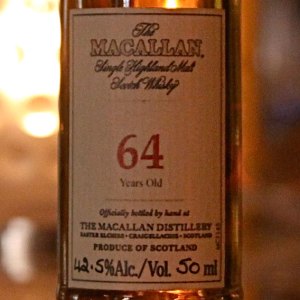 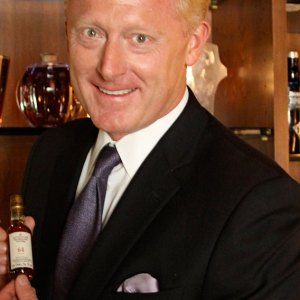 Guests relaxing within the wood-paneled, Lalique-accented ambience of Macallan’s elegant £10 (Ten Pound) cocktail lounge at the Montage Beverly Hills hotel might expect to see Macallan 25 Year Old at $95, the 30-year-old Fine Oak at $170, and even the 1951 Macallan at $900, all served in Lalique owl-pattern glasses. But even the most jaded single-malt aficionados invariably do a double take at the $64,000 price for a single 50 ml vial of the Macallan 64 Years Old on the £10 oak-sheeted menu. At 85 proof, this dram of ultrarare Macallan is composed of three sherry-cask-aged single malts, filled, respectively, in 1942, 1945, and—making it the youngest—on January, 1946, which by law is the only year that can be referenced to denote the whisky’s age.

Not only is this the oldest Macallan ever released by the iconic Speyside distillery—famed for its rich, resiny, sherry-barrel-aged whiskies—this is the only mini-bottle of its kind and is of such scarcity its label had to be hand-printed. Thus, rather than be kept on the £10 back bar, which contains what is arguably the most extensive collection of Macallan single malts in America, this particular single malt is locked in the hotel’s safe, where it nonetheless is ready to be shown to anyone who can prove they are serious about purchasing what is probably the most expensive dram of whisky in the world.

That statement is verified by the fact that this is the same precious Macallan 64 Year Old single malt that filled the one-of-a-kind Lalique Cire Perdue lost-wax decanter auctioned off by Sotheby’s in New York City on November 15, 2010, for $460,000, the proceeds of which went to charity: water, a nonprofit that provides safe drinking water to developing nations. As a result, on July 5, 2012, Guinness World Records proclaimed the Macallan 64 Year Old the most expensive single-malt whisky ever sold at auction.

“From the outset in planning the Macallan in Lalique Cire Perdue initiative, we decided to make a small measure of the actual 64-years-old whisky available at every location on the decanter’s world tour across our major markets,” said David Cox, Macallan’s director of fine and rare malt whiskies. At each location, the brand auctioned a 100 ml bottle of the 64-years-old Macallan for charity: water, raising a further $150,000, on top of the $460,000 raised at the final Sotheby’s auction in New York. There was a small amount of liquid left following this, and Macallan decided to make it available at the Montage.

Naturally, following the precedent of the auctioned Lalique decanter, all proceeds of the $64,000 dram, if it is ever sold, will go to charity: water, or to another charity of the purchaser’s choice. In the meantime, it is quite a responsibility for the Montage Beverly Hills to be the guardian of so precious a single malt.

“We were honored, and it was a great sign of the commitment of the partnership between the Macallan and Montage to be entrusted with the last remaining dram of this valuable scotch at £10,” said Hermann Elger, general manager, Montage Beverly Hills. “Not that we wouldn’t sell it, and we probably will someday, but we’ve actually become quite fond of it and the story that goes along with it. But there’s a charity more eager to get the money than we are to keep the Scotch.” (310.860.5808, www.montagebeverlyhills.com, www.themacallan.com)