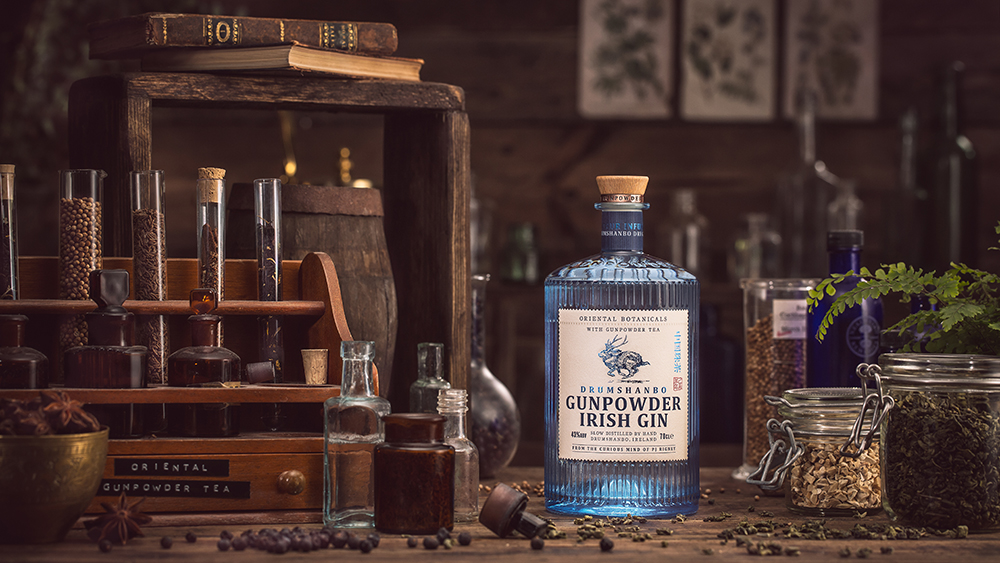 Gin, once the most oft quaffed clear spirit on the planet, is on the rise again. London dry gin, American-made gin, Irish gin, gin made in Japan, gin made in Scotland. Maybe it’s because all these new whiskey distilleries are opening up and they need to wait a few years before the single malts are ready. Or maybe it’s just because gin is the most versatile cocktail spirit out there. It’s classic. Timeless. And if you give it a chance, it’s likely to surprise you.

You’ll be forgiven if you’ve never heard of Drumshanbo, a tiny town in Ireland that lists Charlie McGettigan as the sole “notable resident” on its Wikipedia page (you’ll also be forgiven if you’ve never heard of McGettigan, the 1994 Eurovision Song Contest winner with “Rock ‘n’ Roll Kids”). In 2014, a distillery called The Shed opened in Drumshanbo, the first in the area in over a hundred years. The gin produced there is infused with gunpowder tea—a slow-dried, green tea that imbues the spirit with fresh spiciness. Drumshanbo Gunpowder Irish Gin ($37) was voted Ireland’s best gin in 2016 and ’17 at the Great Irish Beverages Irish Gin & Tonic Fest. And if you can’t trust the Irish when it comes to drinking, well, you really shouldn’t be drinking.

Billed as the “maiden voyage” in a series brand owner The 86 Co. has dubbed the “Journeys in Gin,” Ford’s Officer’s Reserve ($35) is a limited edition, 109-proof gin finished for three weeks in Amontillado sherry barrels that impart a wine-driven character rife with dried fruit and tannins. The gin offers honey-like sweetness at the tip of the tongue, followed by prominent juniper and coriander notes in the mid-palate. The higher alcohol content and wood influence make it a formidable base spirit for full-bodied cocktails.

Japanese whisky heavyweight the House of Suntory is branching out into the clear spirits categories of late, starting a few months back with the introduction of Haku Vodka with Roku Gin ($28). Roku means “six” in Japanese, which is the number of botanicals unique to Japan that are used to infuse the gin (along with juniper, coriander and other usual suspects).  Ingredients such as Sakura flower, Yuzu peel and Sansho pepper shape Roku’s singular flavor profile, a combination of green tea and bitters which bears little in common with its forebears from London.

In the late 1990s Hendrick’s master distiller Lesley Gracie was the driving force behind a delightfully peculiar mix of gin, cucumber and rose petals that “tilted the staid world of dry gin on its axis.” Gracie has once again broken new ground with Orbium ($45), a reinterpretation of her original Hendrick’s recipe, bolstered by the addition of quinine, wormwood and lotus blossom essence. This first-ever new Hendrick’s expression is a revelation that takes the palate on a journey from floral into an altogether deeper and alluringly bitter place.

Amass is being marketed as “the first nomadic distillery,” a claim the descendants of many of an industrious moonshiner would no doubt refute if anyone cared to listen. Amass’s first offering is a gin ($55) distilled and bottled in the City of Angels under the direction of Morgan McLachlan of the Spirit Guild Distillery. Made with 29 botanicals, many of them sourced from the Golden State, the gin leads with a bright burst of citrus flavor that is quickly tempered by spicy notes of cardamom and a tinge of sarsaparilla root bitterness, with a little a mushroom funk on the finish. (Next up from Amass, by the way, is vodka produced in Copenhagen).

In the not too distant past, had someone tried to pass off gin from New Jersey, most consumers would have responded with a hearty “fuhgettaboutit!” But things have changed. Today, quality gin can originate just about anywhere, including an independent small-batch distillery in Jersey City. As you might expect, Corgi’s Earl Grey Gin ($35) brims with black tea flavors, bergamot most prominent among them. Smooth and eminently drinkable, it pairs particularly well with lighter mixers.

Copper and Kings The Ninth: A Symphony in Orange Gin

This just-released one-of-a-kind gin ($35) from Louisville’s Copper and Kings distillery is made from apple juice and orange blossom honey in copper pot stills, before being finished in orange curaçao barrels. A botanical combo that includes, among other goodies, crushed juniper berries, coriander and grains of paradise are macerated in apple brandy low-wine, then redistilled with the vapor of jasmine, blood- and sweet-orange peels. Teeming with floral scents and citrus flavor, The Ninth captures the essence of springtime like no other gin on the market.

When it launched in 2009, Sipsmith was much ballyhooed for being London’s first traditional copper pot distillery in nearly 200 years. And the gin they rolled out lived up to the hype. Introduced late last year, Sipsmith Lemon Drizzle Gin ($40) is a zesty spin on the classic London Dry recipe made with sweet sundried lemon peel, lemon verbena and vapor-infused fresh lemons. The point here being, it’s lemony. The gin is refreshingly light, bright and dry, designed specifically for use in a gin and tonic.

You just can’t beat the all-time classics, but you can certainly tweak them from time to time, which is what Bombay Sapphire did a few years ago with East ($30). Launched in 1986, the original Bombay Sapphire is a 100 percent London Dry Gin made with a combination of ten botanicals sourced from around the globe. East is made the same way, with two additional elements added to the botanical mix — Thai lemongrass and Vietnamese black peppercorn. The result: that same great Sapphire taste with amplified citrus and spice.

For about two decades, this sharp and citrusy gin was the only one in the world with its own Geographical Indicator — Plymouth Dry. About five years ago the EU changed its laws, and Plymouth dropped the GI designation. So Plymouth Dry as a style of gin is more an anecdotal than legal definition these days, but nothing’s changed in terms of quality and flavor. Plymouth ($37) remains less juniper heavy than the classic London Dry gins, with a famously smooth, soft finish. Simply put, one of the best there is.

Just this week, Colorado-based Golden Moon Distillery won the Bubble Cap Award for Distillery of the Year, by the American Distilling Institute (ADI), widely considered the craft distilling industry’s highest honor. Their flagship spirit, Golden Moon Gin ($46) is made with mint and juniper berries, along with a mix of herbs and botanicals sourced from Colorado’s Front Range. It boasts a delightfully floral aroma and a gentle, refined taste.