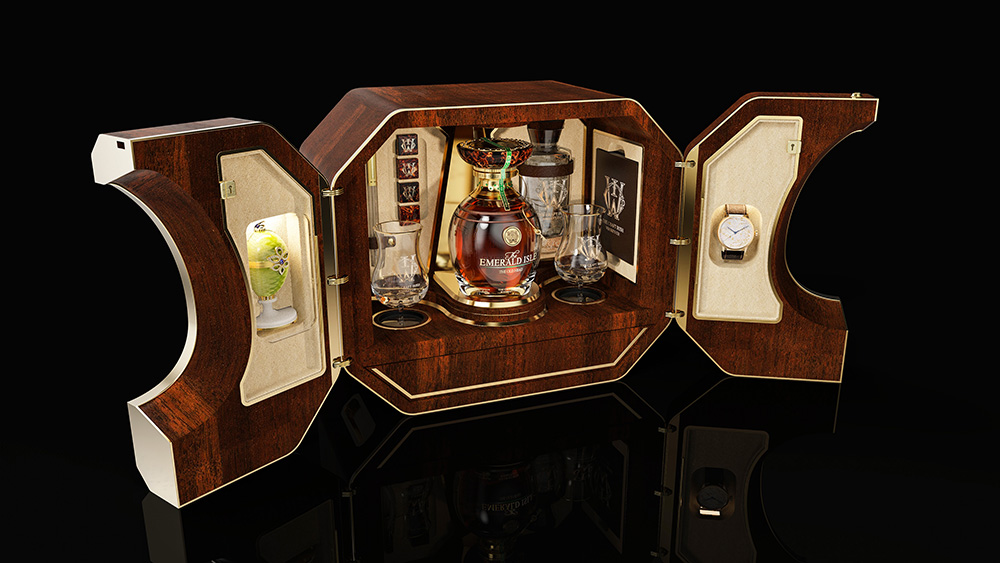 There are whiskey gift sets, and then there’s this $2 million offering from The Craft Irish Whiskey Co. and Fabergé. The limited-edition goodie box boasts not one but two bottles of the oldest triple-distilled Irish whiskey, along with a spate of other luxury rarities.

Dubbed The Emerald Isle Collection, the seven-piece custom set celebrates the ‘Seven Wonders of Ireland’ and is fittingly awe-inspiring. There are seven boxes in total that will each be auctioned with a starting price of $2 million. The first set will be sold at a private auction in Houston, TX, on February 2, while the remaining six will be sold at private auctions and events throughout the year. All proceeds will be split equally between the Correa Family Foundation and a charity of the collector’s choice.

Housed in a handsome walnut box, each set comprises two bottles of the distillery’s prized 30-year-old single malt Irish whiskey, which was matured in first-fill American oak casks then finished in a rare Pedro Ximénez sherry barrel. Alongside this coveted tipple, collectors will receive two exclusive creations by the storied jeweler Fabergé.

The first is a bespoke Fabergé Celtic Egg that was handcrafted by fourth-generation enamel workmaster, Dr. Marcus Mohr. Each egg was forged from 18k yellow gold and features the brand’s iconic hand-painted guilloché enamel, along with a diamond-encrusted Celtic knot and two colored gemstones. Each egg has a different gemstone—from sapphire and amethyst to tourmaline and ruby—that represents one of the Seven Wonders. In true Fabergé fashion, there’s is also an uncut Zambian emerald hidden inside that collectors can turn into a piece of custom jewelry.

The second item is a one-of-a-kind Fabergé Altruist timepiece. Handcrafted by Fabergé’s workmaster André Martinez, each one of the 18k rose gold designs sports a unique dial that again pays tribute to the Seven Wonders. The mother-of-pearl face has been skillfully etched and hand-painted with 24k gold flakes, while the case back has been engraved with The Craft Irish Whisky Co. logo. The watch is equipped with a self-winding movement from Vaucher Manufacture and finished with a luxe brown alligator strap.

To top it off, each collection includes a humidor with two ultra-rare Cohiba Siglo VI Grand Reserva cigars and a gold-plated cigar cutter, so you can enjoy the requisite stogie while sipping your single malt. The set also features a gold-plated water pipette, some pure obsidian whiskey stones, a hip flask with a sample of the Emerald Isle whiskey (considered to be one of the rarest Irish drops in existence) and a carafe filled with Irish spring water from the same region as the whisky.

Check out more pictures of the collection below: