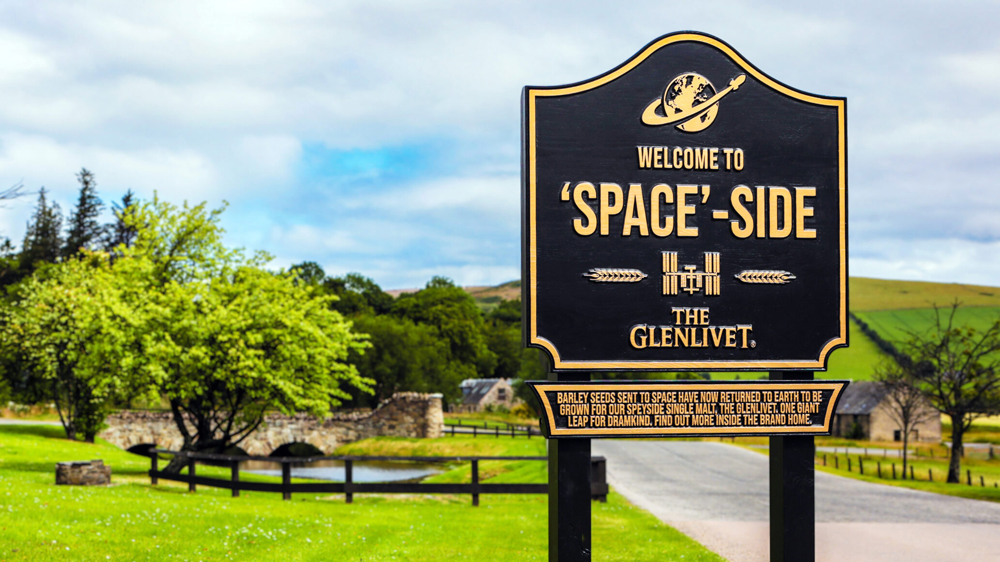 The delayed Artemis I launch and the prospect of putting people back on the moon has made space a hot topic once again. But if you’ve been wondering when whisky was going to enter the interstellar conversation, that time has finally come. The Glenlivet sent some barley to be studied in the heavens a few years ago, and now that it’s back it might possibly be turned into whisky.

To commemorate the occasion, this week the team at the distillery in the Speyside region of Scotland put on their dad joke hats and retooled the welcome sign to say: “Welcome to Space-side.” But let’s rocket right to the point—The Glenlivet, in collaboration with the School of Environmental Sciences at the University of Guelph in Canada and Aegis Aerospace Inc., sent barley seeds to the International Space Station on a SpaceX rocket in May of 2021. The point was to study the extreme conditions of space, like zero gravity and a vacuum environment, upon barley as part of an ongoing experiment to see if crops can be grown and water captured during the process on long space flights.

The question remains whether the barley, now safely back on Earth, can be used to make single malt scotch whisky without turning you into a cosmic ray-irradiated member of the Fantastic Four. Jayne Murphy, marketing director for The Glenlivet, is hopeful. “We are always looking for new ways to innovate our single malt production, and by partnering with the University of Guelph on their trailblazing space experiment, we had the opportunity to do exactly that,” she said in a statement. “We are excited to see how the seeds will perform as they are planted, harvested, malted and distilled into one of our iconic single malts.”

This isn’t the first time the worlds of booze and space have come together. In June of 2021, yeast used for making sake in Japan went to the ISS and spent about a month orbiting the Earth before heading back to the Ninki-Ichi Sake Brewery. About 70 pounds of hops for making beer took a three-day flight aboard SpaceX a couple of years ago and eventually were used to make Sam Adams Space Craft IPA. And a decade ago, Islay distillery Ardbeg sent a vial containing new make spirit and pieces of a cask to the cosmos to see how it would taste, and apparently the results were impressive. We’ll have to wait to see what The Glenlivet decides to do with its space barley, but there just might be a new special-edition bottle on shelves (at least three years from now, of course). Thank you, science.