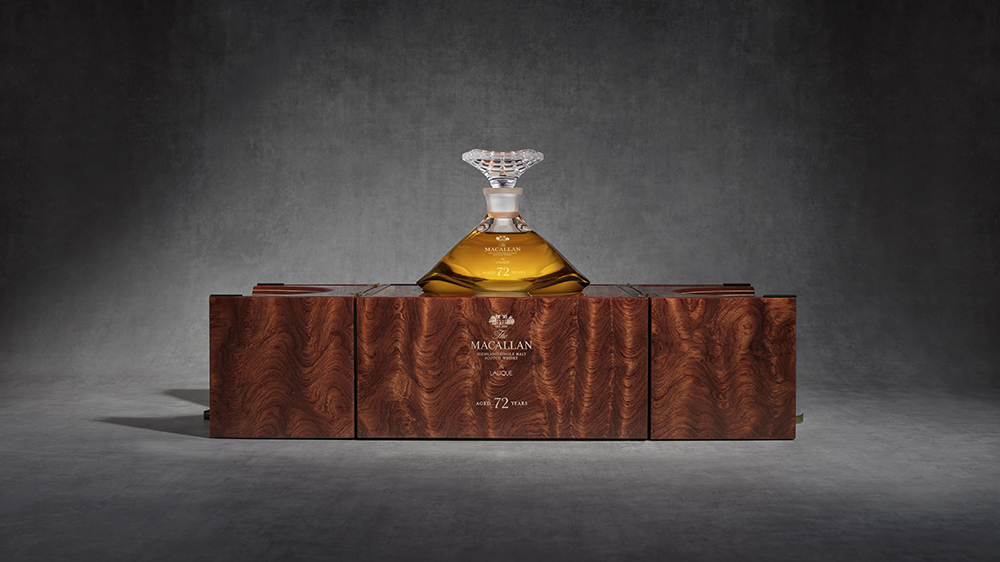 Back in March, the posh £10 bar at the Montage Beverly Hills became the first establishment in California to take possession of an exceptionally rare spirit, The Macallan 72 Years Old in Lalique — The Genesis Decanter, the oldest whisky ever released by the esteemed Speyside distillery. According to £10’s head bartender Cash Black, the decanter that they managed to procure is one of only 156 allocated for the United States, with 600 total made available worldwide.

And while it’s reasonable to expect a whisky that was distilled during World War II and sells for $12,000 per dram to have a long top-shelf life, may I remind you that this is the Montage Beverly Hills we’re talking about here — one of the most exclusive hotel properties in America. If you’re looking for reasonable, try the airport Marriott.

And so it was that a few weeks back a well-heeled whisky lover strolled into the £10 bar and promptly ordered herself and her companions six pours of the precious brown liquid. That’s a $72,000 round (and half the bottle), for those of you keeping score. Now, I know what you’re thinking — gee, that’s an awful lot of money to spend on a mere 12 ounces of liquid. Indeed it is, but note that the $72,000 also included all the aged Gouda, applewood smoked bacon and candied curried pecans the group could eat. And that bacon is to die for!

Now, just what does 72-year-old Macallan taste like? I couldn’t tell you. I dropped by the £10 bar recently hoping to find out, but didn’t dare risk expensing it. And Cash Black made it a point not to turn his back on that crystal decanter and me, not even for a second. However, I did get to nose the whisky and, boy, did it ever smell of luxury. Much like I imagine it would be like to bury my face in a bath towel at Buckingham Palace.

The Macallan’s master distiller Nick Savage has actually tasted the whisky, and claims it “delivers surprise after surprise,” finishes with “a lingering hint of rich fruit and oak,” and is “reminiscent of a time gone by.” (For what it’s worth, I could have told you that last bit sight unseen and taste untasted.) What I can confirm is that, as of this writing, there are still six pours of the 72 Years Old remaining at £10, should you decide to go for it. If not, well, the bar at the airport Marriott has a pretty good happy hour. Maybe I’ll see you there.