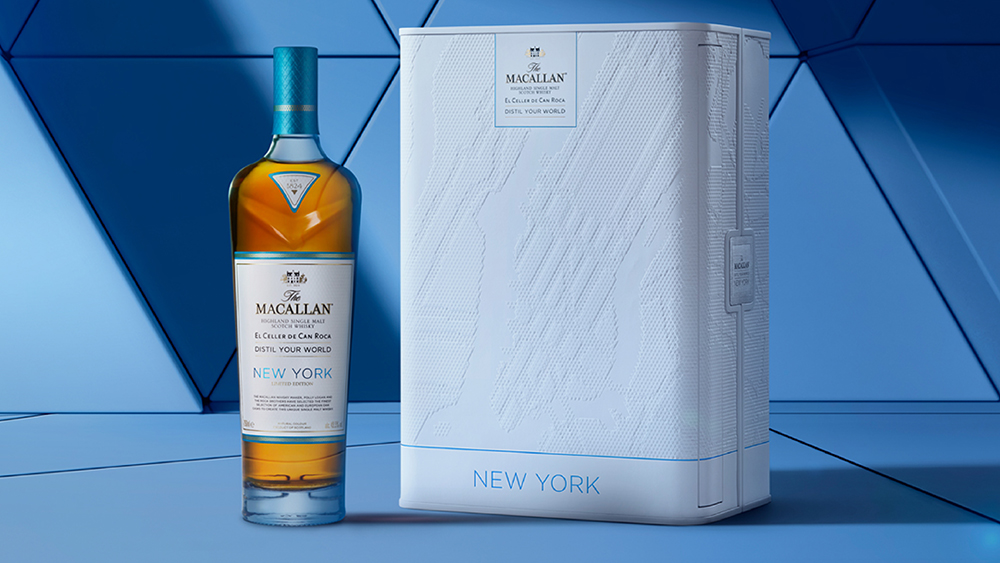 The City that Never Sleeps sure sounds like a good starting point for a Scotch. The Macallan thinks so anyway.

The Scottish distillery has just unveiled a limited-edition single malt inspired by the cultural mecca that is New York. Crafted in collaboration with the Roca brothers, Distil Your World New York aims to capture the essence of the city by paying tribute to its eclectic culinary scene and singular architecture.

In honor of the Big Apple, the expression builds upon the subtle apple notes already characteristic of The Macallan. Created from six European and American oak casks, it offers the sweetness of classic American candy with hints of chocolate and peanuts sure to evoke memories of the “Nuts 4 Nuts” carts found throughout Manhattan. The uplifting citrus flavor, meanwhile, represents the city’s towering skyscrapers.

“We really looked towards the quintessential tastes of New York—sweet candy, waffles, peanut brittle, chocolate, and pecans,” The Macallan’s whisky maker Polly Logan said in a statement. “The city’s thriving street food scene was a great source of inspiration.”

The bottle itself, which features blue accents inspired by the water surrounding New York, comes housed in an elegant presentation box engraved with an aerial map of the city. Collectors will also receive a book showcasing the inspiration for the single malt and all the work that went into creating it.

The single malt was created in collaboration with the Roca brothers.  The Macallan

“This project is a homage to the people of New York. The daring, creative and diverse characters we’ve met along the way,” Logan adds. “This whisky is bold, flavor vibrant and uplifting–just like each of them.”

The entire process has been captured in a new documentary, too. This actually marks the fourth episode of the Distil Your World series in which The Macallan and the Roca brothers explore famous cities around the globe. Scotland, Jerez and London have already been covered, with a corresponding whisky released in each destination’s honor.

To top it off, the Roca brothers have also created an NYC-inspired menu at the twice-named Best Restaurant in the World in Spain. Highlights include waffles with chicken pâté, cured and smoked strip steak, and a caramel-filled apple, of course. The dishes are also showcased within the book that comes with the Scotch.

Limited to just 1,000 bottles, The Macallan Distil Your World New York will be available starting April at select boutiques and retailers. The 700 ml bottle will set you back roughly $4,200, while the 750 ml version costs $4,500.