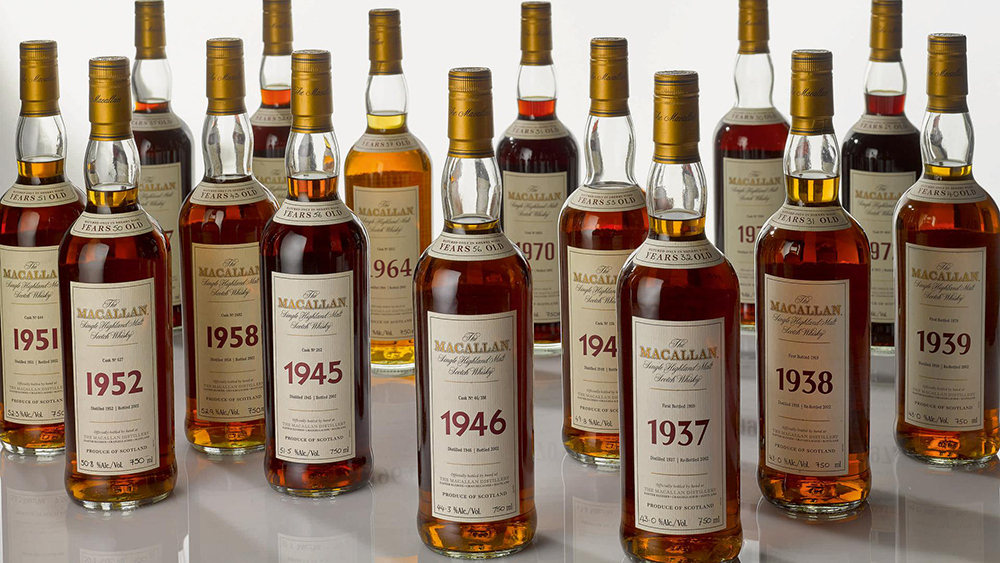 Nobody wants to run dry during quarantine. Those Zoom backgrounds become far less fun for a start. Luckily, the folks at Sotheby’s are sending one helluva whisky collection under the gavel, so you can replenish your dwindling supplies.

The online spirits auction, which is open for bidding now through to April 19, is led by 30 coveted bottles from the legendary Macallan Fine & Rare series. Spanning five decades from 1937 to 1972, the remarkable offering comes straight from the private cellar of specialty retailer Wing Hop Fung.

The whiskies were purchased as a single set from The Macallan back in 2005. At the time, Wing Hop Fung was the only location in North America to house the entire Fine & Rare collection. Since then, each bottle has sat in its original wooden case and out of public view. Until now.

The rare haul boasts vintages that stretch back to before World War II and age statements that exceed half a century. Sure, the collection boasts premium bottles throughout. But the star drop of the lot is a 1945 Macallan Fine and Rare 56 Year Old. This highly coveted tipple, which is matured in sherry wood, is expected to fetch between $38,000 and $50,000.

In addition to the Wing Hop Fung collection, Sotheby’s will be offering a spate of other exceptional bottles, including the oldest whisky to ever have been released from The Macallan distillery. This rare bottle, known as The Macallan Lalique 72 Year Old Genesis Decanter, is a testament to the distiller’s highly meticulous aging process and could reach more than $120,000.

There is also a bottle of The Macallan 50 Year Old in Lalique, 6 Pillars, First Edition with a top estimate of $95,000 up for grabs, plus notable selections of Pappy Van Winkle, Colonel E.H. Taylor, Eagle Rare, Yamazaki, Karuizawa and more.

“It is not only an honor for Sotheby’s to bring these bottles to auction, but an exciting opportunity for any collector to be able to build and complete their own meaningful collection of The Macallan Fine & Rare,” Jonny Fowle, Sotheby’s spirits specialist, said in a press release.

We certainly can’t argue. Any collector who snaps up these bottles is sure to be the envy of whisky collectors everywhere.