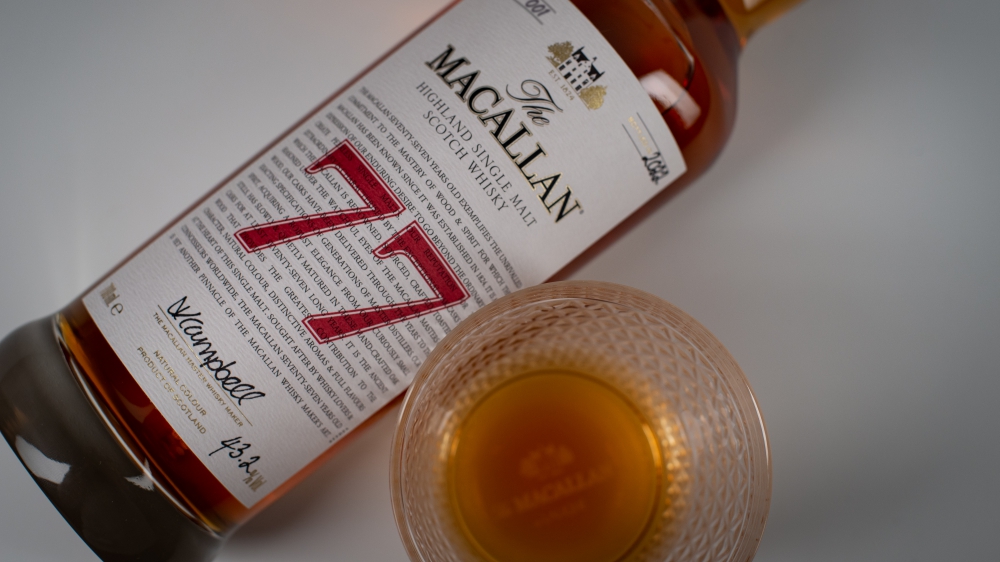 Scotch distillery The Macallan is famous for two things—making really good sherry cask-matured single malt whisky, and releasing really, really old and expensive bottles of said whisky about once a year. The latest to join this exclusive club is the newest member of the Red Collection, a 77-year-old single malt that is priced at $87,000.

First, it bears repeating—old whisky does not always equal good whisky, but sometimes it actually does. Now, we at Robb Report have not been lucky enough to sample this new whisky, but we do have the details to share with you. The Red Collection is a series of whiskies that is inspired by, you guessed it, the color red and how it’s played a part in the brand’s history—the distillery points to tasting notes for this whisky that are reminiscent of red things like dried fruit and cherry bakewell (a sweet tart), as well as red print on labels and red ribbons used to denote old whisky. This is one of the first ultra-aged releases in the Red Collection, which launched two years ago in 2020. It was distilled in 1945 and bottled at 43.3 percent ABV.

To go along with this release, Spanish artist Javi Aznarez created an animated film and illustrations to show the transition of the Red Collection from the past to the present. “The Macallan 77 Years Old is an incredible new high-aged guest expression for The Red Collection, which has been crafted from some of the world’s oldest and rarest casks,” said Macallan whisky maker Kirsteen Campbell in a statement. “It is a peerless single malt whisky that has slowly matured over seven extraordinary decades until it reached peak perfection. This exquisite release reveals The Macallan’s legacy of incomparable craftsmanship, knowledge and skills nurtured by The Macallan’s master whisky makers, past and present.”

This new 77-year-old expression stands with other recent extremely old whiskies from The Macallan, including ones aged from 40 to 78 years that are part of the Red Collection. These are still younger than The Reach, an 81-year-old single cask whisky from The Macallan that was released last winter with a price tag of $125,000. An entire set of the Red Collection sold at auction in October, raising money for charity organization City Harvest London.

It’s a good time to be The Macallan, or any maker of rare, collectible whisky, because as we reported recently the market for these bottles has increased in value dramatically over the past year. The Macallan 77 Years Old is obviously an extremely limited release, but will be available at the distillery, from the distillery’s global network of retail partners and at travel retail in select airports starting this month.