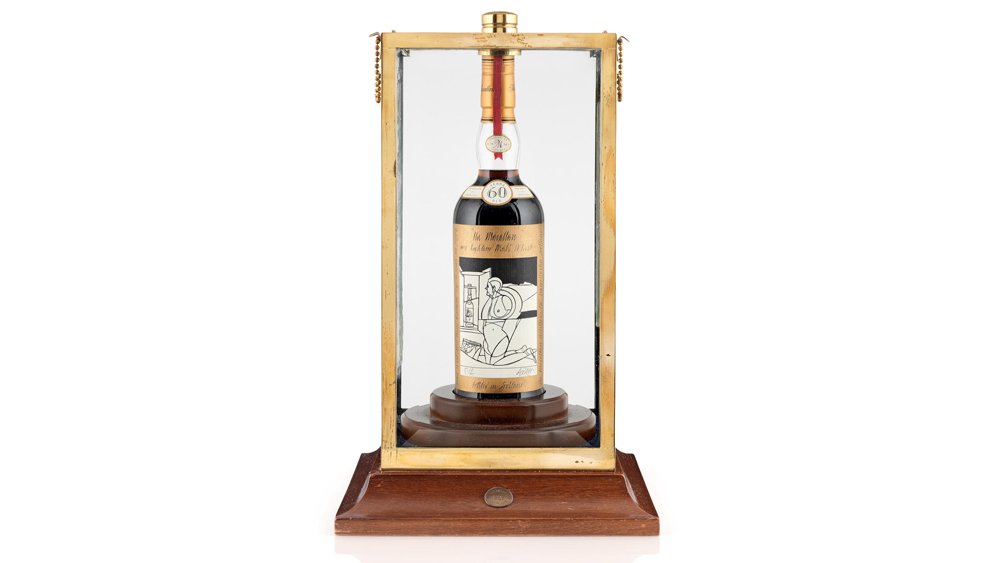 In the world of Scotch whisky, few brands posses the name recognition that The Macallan does. The Speyside distillery has been in operation since 1824 and has earned its reputation for excellence and a rabid fan base—its 50 Year Old scotch was even called out as James Bond’s favorite whisky in Skyfall.

This mania for The Macallan came to a head today, when one of the distillery’s rarest expressions, the Valerio Adami 1926 60 year old scotch, sold for $1.05 million at Bonhams Whisky Sale in Edinburgh, Scotland. The price is astonishing, but not unprecedented: at another Bonhams auction in Hong Kong in May, a bottle of the same release went for just over $1.1 million, setting a new world record for most expensive bottle of whisky. It also gives the Macallan some serious bragging rights: releases from the distillery occupy the top three most expensive whisky spots.

So what is it about this spirit that gives it the power to make wallets and checkbooks fly open? First there’s the rarity factor: only 12 bottles of The Macallan Valerio Adami 1926 were produced and it’s not clear how many remain in the world—though rumor has it that one bottle has already been drunk and another was destroyed in an earthquake. The scotch also boasts an original bottle label created by its eponymous pop artist, Valerio Adami. The Macallan also enlisted Peter Blake, the artist who designed the cover of the Beatles album Sgt. Pepper’s Lonely Hearts Club Band, to create his own label. 24 bottles were filled, and each artist’s label was affixed to 12.

Interestingly enough, the Peter Blake bottles haven’t done quite as well at auction. At the aforementioned Bonhams sale in May, a bottle of the Peter Blake 1926 went for just shy of $1.02 million. However, the Brit will have a chance for a comeback in October, when Sotheby’s plans to auction a bottle of The Macallan Peter Blake 1926. The bottle is estimated between $700,00 and $1.2 million, which is the highest estimate Sotheby’s has ever put on a spirit or wine. Will there be a new record? Better start stretching your bidding arm…